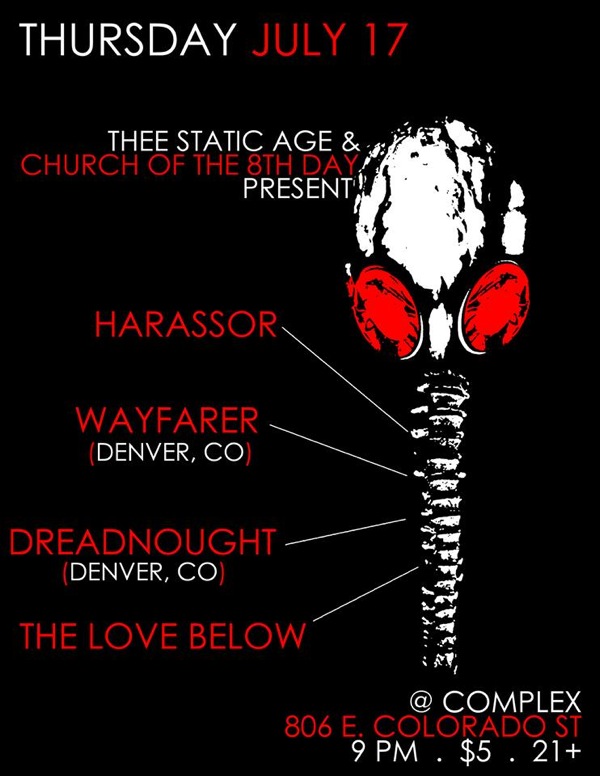 July 17th 2014, Complex, Glendale CA: Los Angeles’ longstanding extreme metal force Harassor released their new full-length album ‘Into Unknown Depths’ earlier this year, and have been playing gigs to present this new material amidst fans and observers in the local underground scene. They performed at Complex in Glendale last Thursday, with two promising Denver-based bands Wayfarer and Dreadnought, and local support from The Love Below. I was yet to see a bad show at this venue, and this gig put together by Church Of The 8th Day and Thee Static Age certainly wasn’t about to become the first.

Doors opened at 9 and the show started promptly at 9:30 with Los Angeles sludge quartet The Love Below taking the stage for an impressive set. The band has been around since 2009, is signed to the A389 Recordings label and has one full-length LP along with a few 7-inch releases under their belt, but this was my first time seeing them and their blend of mighty riffs, delightfully slow rhythms and hardcore vocals fit the vibe of the show and the venue to perfection. The vocalist set station down in front of the stage and as a result created a better connection with the audience, a majority of which stood near the stage for the whole set and gave the band a good round of applause when they were done playing. A great start to the evening.

Next up were Denver, Colorado’s eclectic, all-encompassing quartet Dreadnought, fronted by Kelly Schilling clad in a flowing black dress and aside from her excellent guitar play, she put forth a powerful combination of harsh and clean vocals. The band as a whole presented an extremely diverse musical style comprising a journey of soundscapes portraying doom, folk, prog and black metal among other things. There were a large number of contrasting transitions from song to song, and even within a song. In addition to the guitar, bass, drums and keyboards, they made use of the flute and the mandolin as well. Slow melodic passages left the crowd mesmerized, and were followed with violent outbursts, rendering Dreadnought a great live band by all means. They’ve been in existence for merely two years and are still unsigned, but certainly have a long musical path ahead of them, which will hopefully include many more LA appearances.

Fellow Denver quartet Wayfarer were up next, and while they kept the atmospheric vibe created by the previous band intact, theirs was a relatively straightforward, riff-based, black metal-oriented approach, even though they relied a lot on guitar harmonies as opposed to fast alternate-picking segments. Their crushing sound compelled attendees to bang their heads and there was not a single soul inside this venue that wasn’t enjoying Wayfarer’s set. Their self-released debut full-length album ‘Children Of The Iron Age’ is undoubtedly immense, and their live presentation of these tunes is even compelling.

And lastly, the holy trinity of Pete Majors (vocals), James L Brown III (guitar) and Sandor G.F. (drums), together known as Harassor, took to this stage a few minutes past midnight for a typically unrelenting, bestial and chaotic exhibition of unabated extreme music. They presented material off of the new album ‘Into Unknown Depths’ along with a few other great choice selections from their decade-long career and appeased the gathering here at Complex as violent head-banging accompanied most of the set and even the odd mosh pit was set in motion by a handful of high-spirited yet sufficiently well-behaved individuals. My respect and appreciation for Harassor grows stronger each time I see them, and their approach to writing, performing, producing and releasing music is subversiveness at its finest.

Related: Delving Into Unknown Depths: A Detailed Conversation With Harassor

Overall, this was yet another righteously fantastic show at Complex, thanks to the collective impact of these killer bands from LA and Denver, and the efforts of the venue and the promoters.