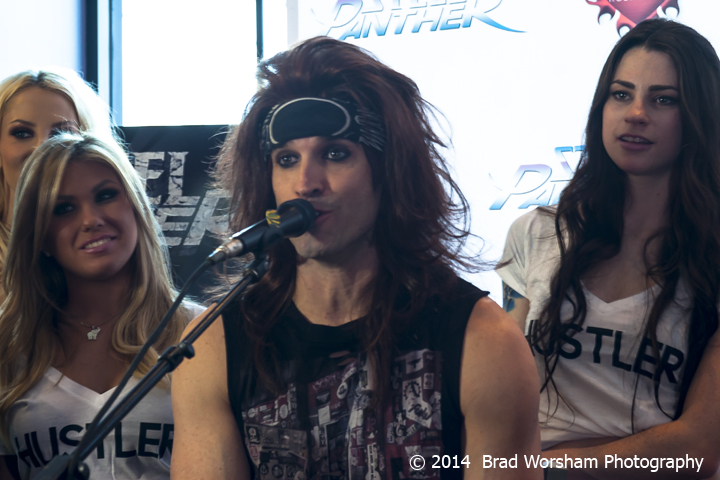 April 3rd 2014, Hustler Store, West Hollywood CA: To celebrate the release of their new studio album ‘All You Can Eat’, Los Angeles glam/comedy metal band Steel Panther took over the Hustler store in their hometown of West Hollywood for a press conference and acoustic performance. Along with media personnel, the first 100 purchasers of the album from this store were granted access to this intimate event, and as it turned out, in many ways it was even more entertaining than their usual live shows on the Sunset Strip.

The media and fans gathered in time for the scheduled 5 PM start of the event, but in true rock ‘n roll style, the band arrived about 30 minutes late, accompanied by the Hustler girls, took their seats and greeted the crowd. “I just want to say right now before we do anything, if you fuck any of these girls back here, make sure you wear a condom because we didn’t”, said guitarist Satchel, and with that they were ready to take on questions from media and fans in a very well-organized press conference. I was given the privilege to open the session with my question about how the band decides on their song titles, for which singer Michael Starr had this to say, “Our song titles come from personal experiences that we have on the road. You know, like ‘Bukkake Tears’ was an experience that Satchel had. Remember that? We were double-teaming this chick, and I shot my load, it hit him in the eye and he started crying. It doesn’t make you gay, by the way.”

The band was bombarded with several more questions over the next 15 minutes, ranging from topics like eyeliners, lube, the missing Malaysian airliner, the new album, upcoming House Of Blues shows, gloryholes, blowjobs and cheating on girlfriends, and they handled all of it with their signature brand of humor which made this quite a unique press conference. But the funniest moments came when a woman asking about the new album misspoke the name of the previous album ‘Balls Out’ as ‘Balls Of Fire’ and the band took the complete mickey out of her. And then there was a 19-year old girl asking them to prom, which they enjoyed very much and ran with it for several minutes. 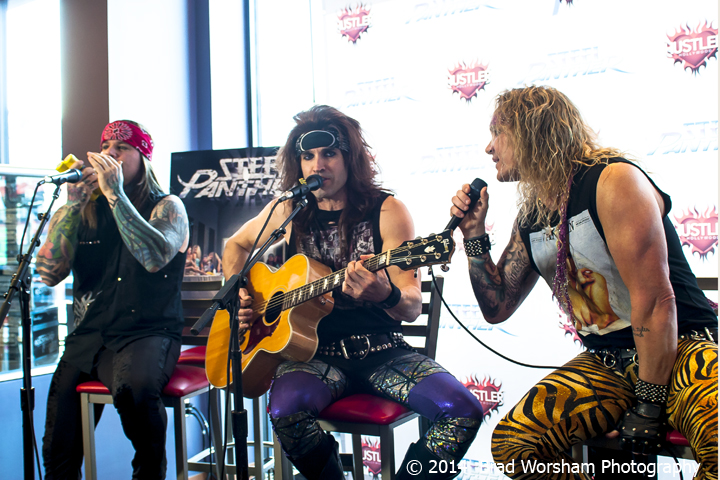 Following the press conference, they played an acoustic set consisting of two new songs ‘The Burden Of Being Wonderful’ and ‘Party Like Tomorrow Is The End Of The World’. It was interesting to see and hear them in this intimate unplugged setting and even though the comedy was still very much as its maximum, their musicianship was brought forth to a greater degree, specially Satchel on the acoustic guitar and Michael Starr’s vocals and lyrics coming across more prominently. They brought on the girl who asked them to prom and made her sit on stage while they played ‘Party …’ which she seemed quite embarrassed by. They closed the set with ‘Girl From Oklahoma’ off of Feel The Steel as a nice little treat for fans of the earlier material, and brought this highly enjoyable event to an end.

Check out a photo gallery from the press conference and acoustic set (view the photos here if you’re on a non-Flash device):

Check out 1-minute live audio recordings of the first two songs from the acoustic set below:

Steel Panther have three residency shows at the House Of Blues on April 7th, 14th, and 21st, and will follow that with a full North American tour through the month of May, so be on the lookout for more Steel Panther and ‘All You Can Eat’ in the next couple of months.

Related: Steel Panther ‘All You Can Eat’ Album Review