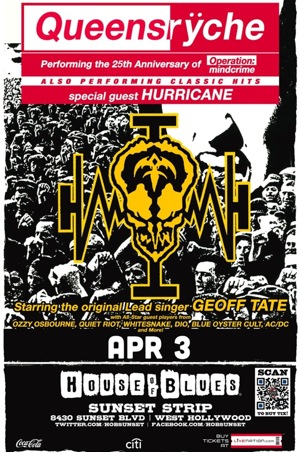 April 3rd 2014, House Of Blues Sunset Strip, West Hollywood CA: Following the much-publicized, overly dramatic and excessively documented split with his original band mates in late 2012, Queensrÿche singer Geoff Tate started his own version of the band and recruited a new group of musicians to help him continue presenting himself as the voice of Queensrÿche and bringing the band’s classic material onto the stage. This version comprises Robert Sarzo and Kelly Gray on guitar, Rudy Sarzo on bass, Randy Gane on keyboards and Simon Wright on drums, with Sass Jordon fulfilling the female vocal duties. Currently on tour to celebrate the 25th anniversary of the iconic ‘Operation: Mindcrime’ album, Geoff Tate’s Queensrÿche took to the stage at the House Of Blues Sunset Strip last night, with John Moyer and Brian Tichy standing in for Rudy Sarzo and Simon Wright respectively. The subject of severe hatred over the past year or so, Tate has been painted as quite the villain by many Queensrÿche fans, and they aren’t ready to give his version of the band the time of day. But, a sizable crowd gathered here for this show and I went in with a strong sense of curiosity in an attempt to discover what the show would be like.

The sole opening act for this show was Los Angeles-based classic heavy metal band Hurricane. With Robert Sarzo pulling double duty playing guitar for both bands and the rest of the band consisting of Tony Cavazo on bass, Mike Hansen on drums and Jason Aimes on vocals, Hurricane played a 40-minute set that largely focussed on their 1988 release ‘Over The Edge’ with as many as five songs off of it including their intriguingly heavy, slow and bluesy version of Alice Cooper’s “I’m Eighteen”, to aptly tie in with Queensrÿche’s Mindcrime 25th anniversary celebration. Hurricane had their heyday in the late 80s but faded away in the 90s before re-emerging briefly in 2000, and even though they haven’t released a studio album since the 2001 effort ‘Liquifury’, they officially made a comeback in 2010 and have been playing occasional shows since. They put on a more-than-decent performance here as a warmup for the headline act, presenting a style of classic metal that went down rather well amongst Queensrÿche fans. Vocalist Jason Aimes did a great job and so did all three of his band mates, specially Mike Hansen on the drums. It was my first time seeing them and based on how they carried themselves through this set, I wouldn’t mind seeing a full Hurricane headline show with this lineup. 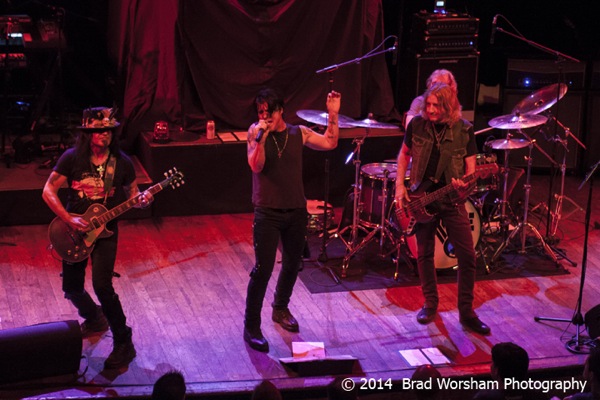 Visit Hurricane on the web:
facebook.com/HurricaneTheBand

At 9:45, the lights went out and members of the aforementioned incarnation of Queensrÿche appeared on stage one by one, firstly sans Geoff Tate as they played the instrumental ‘Anarchy-X’, and as soon as they moved on to the next track ‘Revolution Calling’, the singer made his entry to begin this rendition of ‘Operation: Mindcrime’ in earnest. Track by track, they went about celebrating 25 years of one of the greatest concept albums ever written, with tunes like ‘Suite Sister Mary’ brought to life by the participation of talented Canadian singer and performer Sass Jordan, and other classics like ‘The Needle Lies’, ‘I Don’t Believe In Love’ and ‘Eyes Of A Stranger’ truly standing out as the highlights of the set. But one unexpected and pleasantly surprising item was Brian Tichy’s drum solo which came in after ‘Speak’. He channeled all of the John Bonham within him to come up with what I can honestly deem as the best drum solo I’ve seen in a long time. Besides this solo, he did justice to all the Queensrÿche material and once again proved his musical versatility behind the kit.

John Moyer, the other stand-in musician in this lineup, also did an excellent job playing an important part not only on bass and with some great backing vocals on the chorus lines specially in ‘I Don’t Believe In Love’ and ‘Jet City Woman’, but also in boosting the band’s on-stage energy and presence. The regulars Robert Sarzo, Kelly Gray and Randy Gane performed their roles to perfection as well. Even though most of these people are in no way associated with Queensrÿche’s history, they can’t be faulted for doing a fine job in covering the material and handling themselves with complete professionalism. 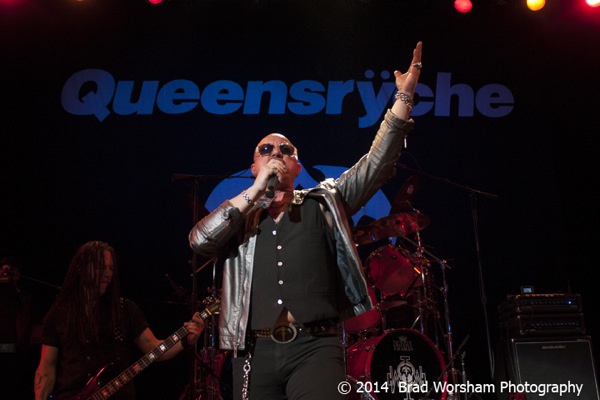 As for Geoff Tate himself, his vocal delivery was spot-on throughout the set as he successfully hit all the notes and did what the material demanded of him as a vocalist. No matter where you stand on the Queensrÿche debate or what you think of Tate’s role in the whole episode, purely as a vocalist he’s got the pipes and clearly carries a strong passion for his art, to be continuing to do this against all odds and embracing the challenge head-on.

Having said that, the encore left many in the audience disappointed and angry, as some fan favorites like ‘Queen Of The Reich’, ‘The Lady Wore Black’ and ‘Take Hold Of The Flame’ were omitted from the set. Knowing just how popular and loved these classics are amongst fans and the fact that he can still sing them, it was very surprising that Geoff Tate decided to leave them out. It was almost like Motörhead leaving out ‘Ace Of Spades’ and ‘Overkill’ or Metallica deciding to skip ‘Master Of Puppets’. Geoff Tate must really dislike those songs to not want to play them anymore despite the fans’ demands. People were definitely a bit shocked and upset, to the extent that one very angry fan rushed all the way from the back of the GA floor to the front row only to yell expletives at the band while they bid goodbye at the end of the encore. But aside from that, the Mindcrime portion of the set certainly satisfied the attendees and overall it was a good show by the band.

While the band played one Mindcrime tune after another, I couldn’t help but ponder what could have been, and as a Queensrÿche fan I was overcome with an undeniable feeling of sadness at their current predicament, with the man possessing its true voice at such odds with the rest of the original group, and even though the two versions of the band means more Queensrÿche shows for fans, them failing to work through their differences is indeed a shame.

Check out a photo gallery from the show below (view the photos here if you’re on a non-Flash device):