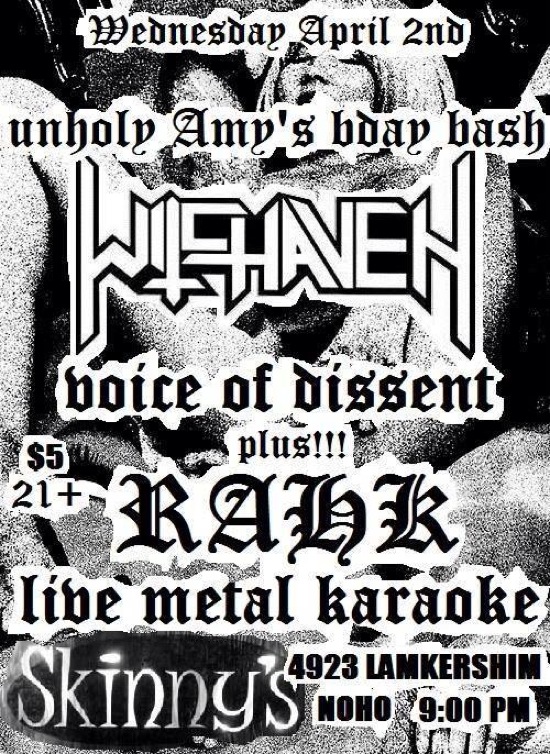 April 2nd 2014, Skinny’s Lounge, North Hollywood CA: As part of their weekly series of ‘Rock-A-Holic-Karaoke’ Wednesday events, Skinny’s Lounge played host to local metal bands Voice Of Dissent and Witchaven last night. Presented by Schecter Guitar Research and Poor Kids Radio, the show also featured its usual live metal karaoke with the house band jamming some of the most popular metal tunes and inviting audience members to participate. Besides, DJ Skum played tunes between sets. This has been an ongoing series for a while now but I hadn’t had a chance to attend any of the previous such events, and finally I was able to venture out to get my first taste of it last night.

Los Angeles blackened thrash tyrants Witchaven were the first to take the stage, for their first show since opening for Exhumed and Iron Reagan at the Chain Reaction last December, which was also the last time I saw them live. These boys have been laying low, recuperating and working on new material, which they presented a large chunk of in this set, with four new songs that showed them in a different light as compared to what they’ve been known for. These songs clearly boasted of more hooks in an old-school traditional heavy metal kind of way but at the same time some of it sounded more technical than their past material as well. With this nature of musicianship, they might succeed in transcending their black thrash sub-genre tag and become more of a holistic metal band, but only time will tell. With that said, their signature elements are still very much present in this new music and they’re not alienating anybody. Three of the older staple tunes were also played in this 7-song, 40-minute set, and performance-wise even though they were naturally a bit rusty from not having played on stage for such a long time, they were still on-point for the most part, specially with the newer songs which they seemed to really enjoy playing. Plus, there wasn’t much of a crowd in the venue during their set and they must have found it hard to motivate themselves to give their best here. Considering that, they did a fine job. I’m extremely glad to see them back with a proper 4-piece lineup, as their music was never suited for a 3-piece setup. They’re getting ready to make a return and besides their upcoming show with Ghoul and Iron Reagan at the Roxy on April 13th, there’s a lot more to come from the Witchaven camp in the near future.

Next up, it was Voice Of Dissent with their brand of heavy music that consisted of a blend of modern and classic metal elements. They formed in 2010 and released their debut full-length album ‘Subverses Book 1′ in 2012, which was strongly represented in this set with five of the six songs coming from it. Upon first impression, the band showcased themselves as a quartet of seasoned musicians who were well adept at their craft, both individually and collectively. Vocalist/bassist Rodney McGlothlin presented a low-pitched clean vocal style that’s not at all common in the metal genre these days, and did a great job with it. It was almost as if Dave Mustaine’s snarl was put together with Robb Flynn’s aggression and presented with Bobby Blitz’ gusto. Their overall sound was strong, crunchy and crisp, which showcased the tightness of the group and also, the quality of their equipment, which is an aspect many local bands don’t pay enough attention to. My favorite song of this set was ‘Brotherhood Of The Snake’, a delightfully slow, heavy sludgy tune that led perfectly into the last item of the set, an excellently performed cover of Machine Head’s gem ‘Davidian’. Since this wasn’t by any means a big audience, the true test for Voice Of Dissent will come in front of larger crowds and that’s when you could really judge their quality as a band, but they formed a solid first impression and seemed like they would handle themselves professionally on bigger occasions as well. If there’s anything I’d suggest changing or incorporating more of in the music, I’d say they could do with more extended instrumental passages within songs so that they can express their musicianship even more. Plus, more songs like ‘B.O.T.S.’ would be well appreciated by fans of riff-worshipping stoner sludge like myself. But excellent set by Voice Of Dissent overall.

Following that, the live metal karaoke proceeded on with the house band playing hard rock and metal classics and local musicians in the audience going up on stage to jam on some AC/DC, Black Sabbath, Iron Maiden, Judas Priest, Van Halen and the like. All in all, an entertaining Wednesday night at Skinny’s, and it’s good to see the organizers of this series are doing their bit to develop a sense of community in the scene.