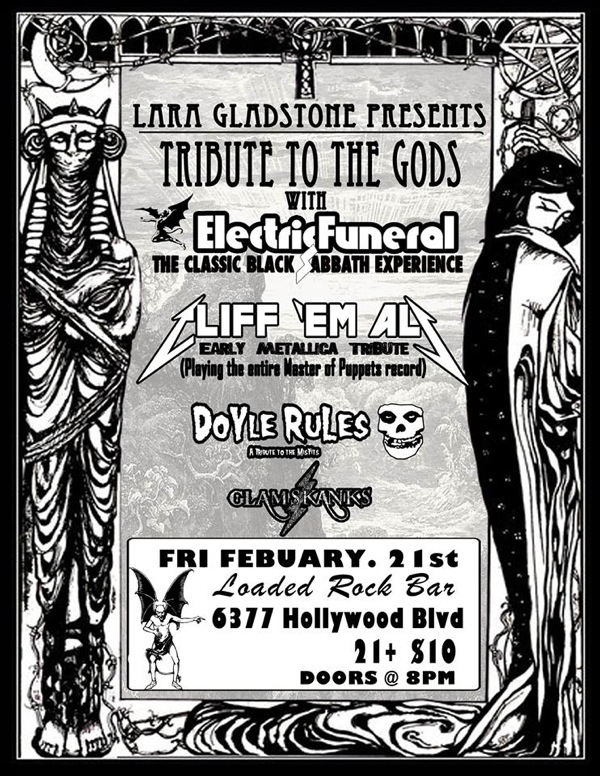 February 21st 2014, Loaded Rock Bar, Hollywood CA: Fridays at Loaded are usually entertaining for all involved, but with a lineup consisting of premier old-school Metallica tribute band Cliff ‘Em All, classic Black Sabbath tribute act Electric Funeral, Doyle-era Misfits tribute Doyle Rules and local all-female rock n’ roll outfit Glam Skanks, this particular show presented by Lara Gladstone promised to be a special event. I had a feeling it was going to be the best rock/metal show this venue has seen till date, and sure enough, my gut feeling wasn’t wrong whatsoever. Through this review I’ll attempt to capture the madness that was last night.

The show started at 8:15 with the Glam Skanks taking the stage. Although these girls have been highly active in the local gig scene since they formed last year, I somehow never got a chance to check them out and this was my first time seeing them. To be honest I knew nothing about them, and the visual image I had pictured in my head based on their name proved to be completely wrong when these four pretty, elegantly-dressed girls appeared on stage and began a set of delightful rock ‘n roll consisting of original tunes and some well-chosen covers of songs by artists like The Runaways, Joan Jett, Nick Gilder, Queen and a few others.

I particularly enjoyed their cover of Alice Cooper’s “Long Way To Go”, a gem of a tune that doesn’t get mentioned or played nearly as much as some of the better-known songs off of the rock godfather’s Love It To Death album. All four members of the Glam Skanks performed their roles excellently, proving themselves to be worthy musicians and not just another run of the mill all-female band that serves as mere eye candy. Vocalist Ali Torres delivered each tune with the right voice, tone and attitude. Even while she sang these songs, she showed off some dancing skills which she seemed to have a natural flair for and it didn’t come across as forced of fabricated in any way. If you’re a fan of classic Runaways-style Los Angeles rock ‘n roll, pay the Glam Skanks a visit the next they play a show near you.

Next up were Doyle Rules, bringing the punk to this show with a hefty dose of 20 Misfits tunes in a 45-minute set. Of course, with any Misfits tribute act, the first thing everyone notices is how they’re portraying the Misfits look, and in all honesty, Doyle Rules’ look drew a mixed response from the crowd. Many people were put off by their use of wigs to do the Doyle hairstyle. The wigs just didn’t look right, and that was probably the issue more than the fact that they used wigs. Anyhow, they made up for it to a large extent with their musicianship, and I felt the guitarist’s performance was the most positive aspect of the set as he laid down the Doyle sound to perfection. They played a surprisingly large number of tunes from the Michale Graves-fronted Misfits albums, which the die-hards in the audience definitely enjoyed. As expected, there were plenty of mosh/dance pits and the atmosphere inside Loaded was festive. Doyle Rules’ set had a gradual buildup to it and ended on a strong note with ‘Last Caress’ and ‘Die, Die, My Darling’. So even though Doyle Rules have room for improvement in terms of the look and presentation, they certainly did justice to the songs they chose to play and gave Misfits fans a lot to cheer about.

After the rock ‘n roll and the punk , it was time for Loaded to be taken over by classic heavy metal. At 10:40, a thick cloud of artificial fog engulfed this tiny room, as the famous ‘Ecstasy Of Gold’ rang loud and clear on the PA, signaling the arrival of Cliff ‘Em All onto this stage. They began their set with ‘Battery’, the opening track off of Master Of Puppets, and played the album in its entirety, much to the delight of the metalheads that had completely packed and sold out this room. The turnout here for this show was great right from the get-go, but Loaded was undoubtedly at its most packed during Cliff ‘Em All’s set. Aside from the ‘staples’ like the title track and ‘Sanitarium’ which are played often not only by Cliff ‘Em All but by the original band as well, ‘Disposable Heroes’ was probably the most enjoyable song of the lot. Even though not part of the Master Of Puppets album, the ‘Anasthesia’ bass solo was appropriately played as a lead-up to ‘Orion’, and bassist Menno Verbaten’s mad skills on these two tunes was the highlight of the set in my opinion.

The fans were in good voice and sang along for the entire set. Heads were banging at full tilt and the circle pits were rolling with speed during this crushing Cliff ‘Em All performance. Frontman John Hatfield was fighting a cold but you couldn’t even tell because the crowd’s unbridled enthusiasm helped him out as their collective sing-along of the vocals was louder than him. Guitarist Chris Velez, on the other hand, was flawless on the guitar, except for a slight technical hiccup during ‘Leper Messiah’. It’s like stating the obvious when I say he plays circles around present-day Kirk Hammett, and Chris’ solid rendition of these Metallica tunes is, ironically, a reminder of just how sloppy and horribly cacophonous Hammett is on stage these days.

Drummer Dan Hegarty was having monitor troubles and for a sizable portion of the set he didn’t seem to be able to hear any of his band mates, but considering that he coped with it well. The only negative of this Cliff ‘Em All set was the extreme overdose of the fog. It just didn’t fit the Metallica vibe at all, save for a couple of moments in the set. Other than that, this was yet another fantastic show by Cliff ‘Em All, and for Metallica fans in the city, this band is a must-see.

And finally at 15 minutes past midnight, Electric Funeral took the stage and converted Loaded into a church of metal worship, bringing the music of the metal gods to this audience and doing it complete justice. The crowd thinned after Cliff ‘Em All’s set, but there was still a decent number of people present here for the final offering of the show, and none of them regretting doing so as Electric Funeral put on a Sabbath exhibition of epic proportions, playing a 75-minute set consisting of the finest Ozzy and Dio-era classics. This is a band I’ve seen on numerous occasions in the past at venues such as the House Of Blues Anaheim and Santa Fe Springs Swap Meet, but this was by far their best effort in my opinion as it benefitted from the atmosphere at Loaded and had a clear sense of intimacy which was definitely missing from the past shows they played at those bigger venues.

The band nailed the Sabbath stage look, and performance-wise, they were second to none. Singer Jeff Fahnestock fronted them with an insanely great performance on vocals as he pulled off the Ozzy and Dio vocals brilliantly and got the crowd immensely excited. They started the set proper with the song Black Sabbath itself and had an unmistakable flow with tunes like ‘Neon Knights’, ‘NIB’ and ‘Sweet Leaf’. By the time they delved into the more popular ‘Iron Man’, ‘War Pigs’ and ‘Fairies Wear Boots’, every single person in this room was singing the lyrics. The skull-crushing doom of the Iommi riffs was executed perfectly by Jesse James Hudgins, bringing much joy to the headbangers in the crowd. The rhythm section of Chis ‘Drumslut’ Silva and new bassist Michael Cullen was equally impressive, and together the quartet schooled us with a flawless Sabbath set. Electric Funeral were, in all honesty, the best band of the night, and people who didn’t stick around to see them missed out on pure heavy metal righteousness.

Overall, this was by far the best show I’ve seen yet at Loaded, in every aspect imaginable. A lot of people don’t respect tribute bands and are not willing to give them the time of day, but when tribute nights are as well-executed as this ‘Tribute To The Gods’ and the bands are as great as the ones that played this show, the amount of fun is endless and hence I strongly encourage the true rock, metal and punk lovers to attend such shows in future.