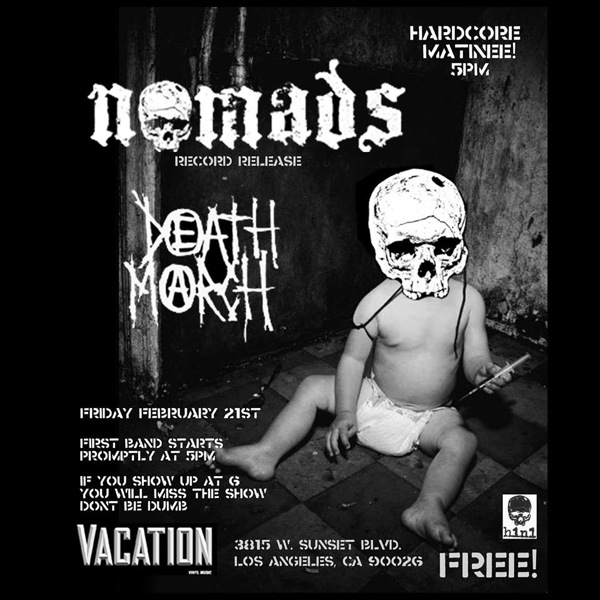 February 21st 2014, Vacation Vinyl, Los Angeles CA: There is never a shortage of free live entertainment in Los Angeles, with various venues doing no-cover shows and record stores hosting free events on a regular basis. Local hardcore punk bands Nomads and Death March came together for one such free in-store at Vacation Vinyl in the Silver Lake area of Los Angeles yesterday. This was a matinee show in celebration of the release of Nomads’ self-titled debut EP 7-inch, which was available for sale at the store. Despite such an early show on a Friday, the turnout was great and the store was packed with people even before it started, and after a swift gear setup by the bands, things got underway at 5 PM, as scheduled.

Death March played a 15-minute set of D-beat laden hardcore punk and got an appreciative response from the crowd. Their set included a cover of Wolfpack’s “No Future”, and looking at the Wolfpack tattoo on the vocalist Rob Aston’s neck, it was certainly an appropriate selection. He led the band excellently as he showed tremendous energy and expression in his performance. Some intermittent feedback noise aside, Death March gave a good account of themselves.

Soon after, Nomads took the stage and played an even shorter set clocking in at a mere 10 minutes. In comparison to Death March they portrayed more of a power-violence vibe in their brand of hardcore punk. They played the Power Of The Riff pre-party with Black Breath and Early Graves at the Echo last year and proved to be a solid opening act on that occasion, and as the headline act at this in-store they definitely held their own, even in such a short space of time. They formed in 2012 so they’re still a relatively new entity but with this debut EP release they’re well on their way to waving the LA HxC flag for years to come.

Overall, this was yet another fun little event at Vacation Vinyl, a store that’s always worked endlessly in its endeavor to support underground metal and punk. As compared to Metal Assault’s last visit to this store for the free Narrows, Early Graves and Lies show, it was a different PA system this time and the sound was definitely better as a result.

Los Angeles’ underground faithful are encouraged to support bands like Nomads and Death March, and visit Vacation Vinyl not only for your rock/metal/punk record needs but also for some killer in-stores in the near future.