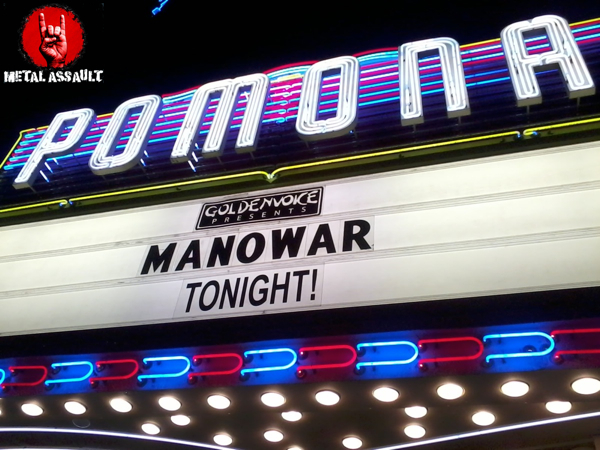 February 22nd 2014, Fox Theater, Pomona CA: Even though they’ve been waging the metal battle since 1980, New York classic heavy metal veterans Manowar have played very few concerts in their home country, and by their own admission, never did a proper US tour. It’s one of the most confounding mysteries of the heavy metal world, but finally in the year 2014 Manowar took a giant step towards rectifying it by embarking on the ‘Kings Of Metal MMXIV’ US tour. Celebrating the release of the re-recorded ‘Kings Of Metal’ album as well as encapsulating their entire career through this tour, Manowar were poised to play in front of their ultra-loyal and eagerly awaiting fans, a majority of whom had never seen the band live. This tour paid its only visit to Southern California, as Manowar played at the Fox Theater in Pomona on February 22nd for what turned out to be a momentous Saturday night.

Taking into account all the outrage surrounding the ticket prices in the last couple of months leading up to the show and the fans’ supposed threats to boycott the show, there was a mighty long line of people waiting outside the venue as early as 6 PM, and this line only got longer with every passing minute. Doors opened promptly at 7 and the crowd was ushered into the venue with swift efficiency by the Fox Theater security staff. Unlike the norm for metal shows here, they were not giving out pit wristbands for this one, and any ticket holder was welcome to walk into the pit as long as it wasn’t already packed. Everyone did their pre-show rituals as some went for the beers, some lined up for merch while others simply spent their time finding the best vantage point to see the show from. Within an hour, the Fox Theater was nearly packed with people and abuzz with excitement, and all was in readiness for the Manowar live experience.

As the clock struck 8, the lights went out and the fans, better known as ‘Manowarriors’, raised their arms in the classic dual fist-lock position to make the ‘sign of the hammer’, a popular aspect associated uniquely with Manowar over the years. But not every fan was doing it as a view of the pit from the level just behind it clearly showed a large number of cellphones held up instead of the hammers. This is where advance in cellphone technology has killed the atmosphere at live shows, specially from the point of view of the band on stage. Credit must be given to the Manowar crew for prohibiting cameras from this show and cracking down on the ‘cellphone photographers’ once the band started, because it went a long way towards giving the show the proper Manowar feel.

Amidst loud roars, Manowar appeared on stage and aptly began with their eponymous track. The backdrop consisted of three screens placed adjacently and combining as one giant screen where visuals including album covers, photos and videos were projected throughout the show. The ‘Battle Hymns’ cover scrolled up and down this array of screens while the band played this opening track at an obscenely loud volume, and the ending of the song lasted for well over two minutes with extended notes, epic stage postures and all. The audience already got a taste of what this Manowar show was going to be like.

They went on to play ‘Blood Of The Enemies’ and ‘Sign Of The Hammer’, and just as guitarist Karl Logan was kicking off ‘The Lord Of Steel’, one of the power amps blew out and as a result, the band had to leave the stage while this technical issue was being sorted. After a 15-minute delay, they reappeared, bassist/mastermind Joey DeMaio apologized to the fans and the band carried on. Following ‘The Lord Of Steel’ and ‘The Dawn Of Battle’, the story of ‘The Warrior’s Prayer’ was brought to life with a video portrayal of it, done with just the right amount of epic and cheesiness it deserved, and of course, the band then came out to play ‘Blood Of The Kings’.

The set was interspersed with videos appropriately placed at various points, like the ‘Kings Of Metal 2014’ tour trailer video which preceded ‘Thy Kingdom Come’, and the ‘Fallen Brothers’ video, a tribute to some of the late music greats which was played while Karl Logan did a guitar solo on stage. Pictures of Ronnie James Dio and former Manowar drummer Scott Columbus drew the loudest cheers from the audience. Besides, there was a video showing the making of the original Kings Of Metal album, and another one giving insight into Ken Kelly’s cover art design. These videos played an important part in making this show a complete Manowar experience which is clearly more than just the music itself.

The Fallen Brothers video led into ‘The Heart Of Steel’, then came Joey DeMaio’s famous ‘Sting Of The Bumblebee’ solo, followed by a solid rendition of ‘On Wheels Of Fire’. Song by song, the set was building itself up to an epic conclusion, and it sure did, with ‘Hail And Kill’ and ‘Kings Of Metal’ garnering a unanimous chorus sing-along from the crowd. With this the main portion of the set came to an end and the band left the stage, albeit only momentarily.

Joey DeMaio reappeared on stage and thankfully, addressed the one question that’s been on everyone’s mind, the ticket price. He explained and pointed at various items of the production such as the custom-made speakers, the projector and the giant sound-proofing curtains that were positioned to cover the balcony to enhance the acoustics inside the Fox. It must be said, this was something completely unique never seen before at this venue where a band not only closed access to the balcony but also took such massive efforts to cover it with high-quality material, all for better acoustics. In all fairness, the Fox has never sounded as good as it did at this show, and the ticket price seems to be justified. For those who can afford it, this $100 show is Manowar in its full glory and definitely worth the money.

DeMaio also expressed the desire to come back to the Fox to play two nights in a row, and spoke briefly in Spanish for the Latin audience. They did a two-song encore with ‘Warriors Of The World’ and ‘Black Wind, Fire & Steel’ and bid their final goodbyes to this audience. Performance-wise, each member of the band held his own. Vocalist Eric Adams’ crisp voice pierced through the entire hall and made a great impact as he displayed his full range of lows and highs. Joey DeMaio was in his element as expected, and so were Karl Logan and drummer Donnie Hamzik. Purely in terms of the musicianship, this Manowar performance showed that the band doesn’t purely rely on the visual and thematic aspects they are known for, and not only for the Manowarriors but for fans of classic heavy/power metal, Manowar put on a show as good as any. The show was over at around 10 PM, and some fans admittedly hoped for a longer set. Some even expected the Kings Of Metal album to be played in its entirety. But for the most part, attendees left with satisfied looks on their faces.

With songs themed around battles, kings, steel, hammers and warriors to go with leather-clad stage costumes, epic postures, ostentatious album artwork, extended endings and an obscene level of loudness that gives Motörhead a run for their money, Manowar showed through this concert that they gladly embrace all the cheesy aspects associated with classic heavy metal, and do a mighty fine job at putting a light-hearted, positive spin on it. And for that reason more than anything else, all heavy metal fans owe it to themselves to experience a Manowar show.