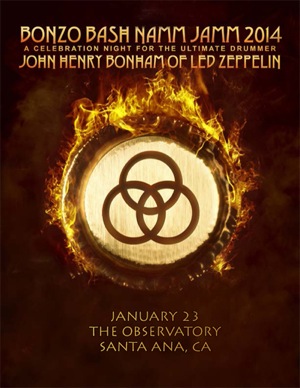 January 23 2014, The Observatory, Santa Ana CA: Created and curated by drummer Brian Tichy, Bonzo Bash is a drum-centric tribute to Led Zeppelin’s John Henry Bonham which takes place on the US West and East Coast, and over the past three years it has become an annual event. Last year’s West Coast edition was made to coincide with NAMM which naturally took it to a whole new level, and the same was done for Bonzo Bash 2014 as it took place at the Observatory in Santa Ana and this year the Bonzo Bash returned bigger and better than ever before. It compiled a huge array of greatly talented, renowned and respected drummers who would go on to play one song each with Brian Tichy’s Led Zeppelin tribute band The Moby Dicks handling the other instruments alongside a few guest guitarists, bassists and vocalists who graced the stage during the course of this Zeptastic evening.

The event was co-hosted by Brian Tichy and Joe Sutton, joined soon by Mike Portnoy as the third co-host, and the three of them took turns to introduce each guest drummer onto the stage. All of them shared the same drum kit, which was a relief from the audience’s point of view as otherwise it would have massively hindered the impact of this show. But the drum kit was certainly adjusted after every song to suit the individual requirements of each drummer, and it was like clockwork. The show started at 8:15 PM, as The Moby Dicks themselves began proceedings aptly with ‘Celebration Day’, and then came a long line of drummers who played a Zeppelin song one by one, with Tichy jumping back on the kit for a couple of tunes as well.

All drummers brought tremendous pedigree to this stage and not only paid a worthy tribute to the late great Bonham but also showcased their drumming wares and talents to an appreciative audience. Some of the younger drummers that took part brought high levels of energy and an unmistakable sense of theatricality with them, Glen Sobel in particular standing out in that sense, performing the song ‘Four Sticks’ with two sticks in each hand and effortlessly doing stick flips while playing. And then there were drummers like Dave Lombardo and Charlie Benante whom people are used to seeing and hearing play heavier, thrashier songs, but they both put on a killer performance on the respective songs they did, and more importantly, looked like they were immensely enjoying the experience. 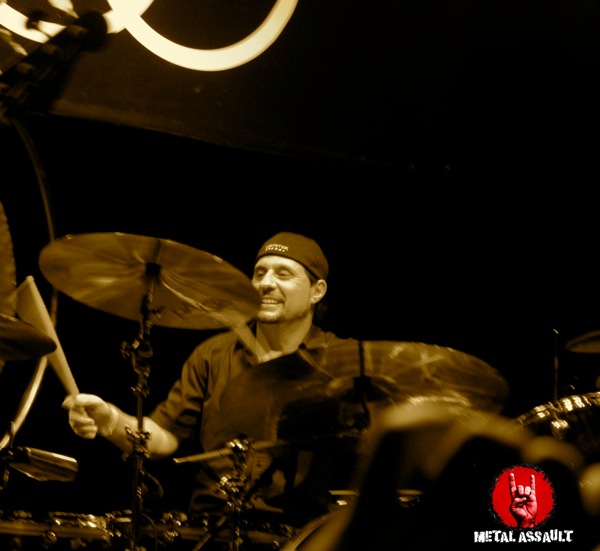 The focus was undoubtedly on the drummers, but with Zeppelin music, obviously an equal amount of effort and talent is required in the delivery of the vocals, bass and guitar, and this event had no shortage of talent in these departments either. The Moby Dicks held their own for the most part as the house backing band with Brent Woods on guitar, Michael Devin on bass, switching with James Lomenzo for a song or two here and there, Stephen LeBlanc on keyboards, and Chas West on vocals, who definitely delivered his best performance till date as The Moby Dicks frontman. Former Megadeth guitarist Jeff Young joined them for ‘Babe I’m Gonna Leave You’ which was an extremely pleasant surprise for the Megadeth nerds in the audience, and Tracii Guns performed the guest guitarist role for a few songs too. Also on guitar, Laura Christine came out with Gene Hoglan for ‘Wearing And Tearing’, and guitarist Gerry Nestler combined with his Philm band mate Dave Lombardo for a fantastic rendition of ‘Since I’ve Been Loving You’. Chas West did most of the songs on vocals with Shaun Williamson and Oni Logan switching it up for a few, as well as Warrant singer Robert Mason, who came in later in the show after having just performed with Warrant opening for Ratt at the Anaheim House Of Blues. 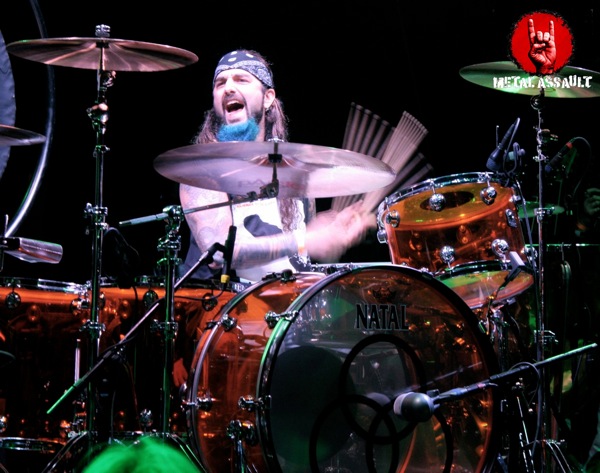 Besides the performances, there were lots of stories shared not only by the three co-hosts Tichy, Sutton and Portnoy, but a few guest speakers were invited as well, like the great Carmine Appice, and John Bonham’s drum tech Jeff Ocheltree, both of whom fondly spoke of John Bonham and endeared this crowd with their stories. But the high point of the night for everyone involved and present here was the appearance of the legendary Bill Ward from Black Sabbath. He was given the Bonzo Bash Legends award, which was previously won by Peter Criss and Carmine Appice. Bill Ward’s arrival was greeted with huge cheers, and as he sat down on the drum riser and spoke about Bonham and the old days, everyone paid undivided attention and even though the audience would have absolutely loved for Bill to play some drums, his presence and speech alone made this event truly special.

The set lasted for a whopping 5 hours and 15 minutes, culminating at 1:30 in the morning with Cortney DeAugustine doing lead vocals and drums on ‘Stairway To Heaven’, a heartwarming performance by her and an ideal way to end the show. With a set as long as this, Brian Tichy and his horde of musicians thoroughly tested this audience, and even the crowd was gradually thinning as the clock went past midnight, there was a good number of hardcore Zepheads left at the end.

Overall, Bonzo Bash 2014 succeeded in its endeavor of putting on a memorable all-star rock music marathon, and fans would look forward to many more such events celebrating the true magic and legacy of Led Zeppelin and John Henry Bonham.

View a flash slideshow of the photos from the show (26 photos):