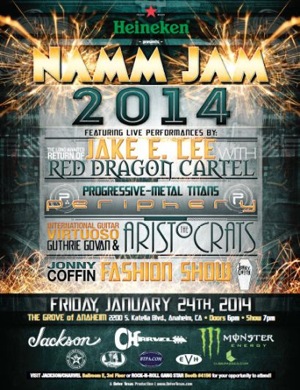 January 24 2014, The Grove, Anaheim CA: After some great curtain-raising events on Wednesday and opening day festivities on Thursday, the NAMM week rolled into Friday, which brought forth another potentially enjoyable showcase event, the Heineken NAMM Jam sponsored by Jackson, Charvel and Monster Energy with an extremely diverse artist lineup featuring Jake E. Lee’s Red Dragon Cartel as the headline act, modern prog giants Periphery as main support, Guthrie Govan & The Aristocrats, and Jake Allen. This was an invite-only event and entry was granted on a first-come-first-serve basis. Doors opened at 6, and following the activities at the Anaheim Convention Center throughout a very busy Friday, pass holders for the Heineken NAMM Jam shifted their focus to the Grove, in anticipation of an intriguing evening of live music.

The show began at around 7 PM with the opening act Jake Allen, a finger-style acoustic guitarist who played a 30-minute set of music that can be described as a combination of rock and jazz, amongst a few other elements. His guitar-playing was certainly interesting to watch for his usage of a playing technique rarely seen in hard rock and heavy metal, and even though his music might not have been nearly heavy enough for those in the crowd that were fans of the bands to follow, Jake Allen turned out to be a good opener for this show and gave a good account of his talents. 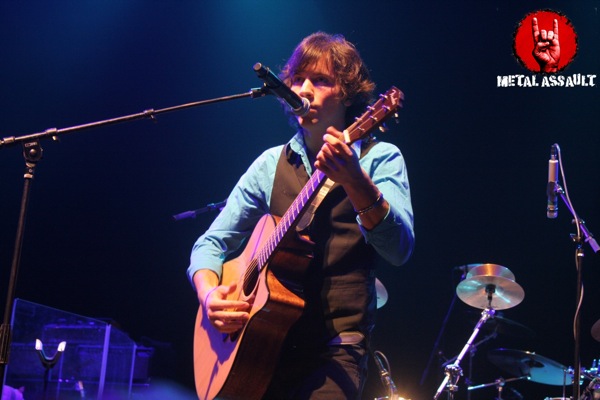 Next to take the stage were The Aristocrats, i.e. Guthrie Govan on guitar, Bryan Beller on bass and Marco Minnemann on drums. In all honesty, they absolutely blew away the minds of everyone in attendance. Each member’s individual musicianship was there to be seen and heard, and their collective effort as a trio was truly spellbinding. Guthrie Govan was hilarious in this crowd banter in between songs as well, making the set all the more fun for the audience. The sheer class and pedigree of these musicians was clearly felt in this performance. Metalheads who know Govan, Beller and Minnemann for their associations with Periphery, Dethklok and Kreator respectively would find it fascinating to see what they do as a trio in a completely different musical setting that is The Aristocrats, and for that reason, even though their music isn’t by any means ‘metal’ in the strict sense, it’s highly recommended for everyone who enjoys virtuosic heavy music. Periphery guitarist and principal songwriter Misha Mansoor was seen having the time of his life watching from the side of the stage, and the gleeful, awe-struck expression on his face completely summed up the kind of impact The Aristocrats had with this performance.

Check out a slideshow of 13 The Aristocrats photos below:

Talking of Periphery and Misha Mansoor, they themselves hit the stage next, but in a surprising move, played an all-instrumental set which was primarily a result of vocalist Spencer Sotelo’s bronchitis rather than a deliberate step by the band. Quite a lot of attendees were here mainly to see Periphery, and a majority of them found the instrumental version of Periphery to be as engaging as the standard version with vocals. It was a unique insight into what the hugely talented instrumentalists in the band can do on their own, given a chance like this. Their sound mix wasn’t quite perfectly dialed in but they still sounded excellent for the most part and got a great response from this crowd. Although Misha Mansoor made it clear that the instrumental set wasn’t their original intention, fans would probably not mind if Periphery’s output in this setting spirals into them doing more such shows in the future. [Thanks to Lane Steele for contributing to the review of Periphery’s set.]

At around 10:30, headline act Jake E. Lee’s Red Dragon Cartel came out on stage and played a set of Ozzy and Badlands covers along with a few tunes off of the band’s upcoming self-titled debut album which releases January 28th via Frontiers Records. Some readers might have read the review of Red Dragon Cartel’s live debut gig at the Whisky in December, and following such a disastrous debut, the onus was on the band, and specially on singer Darren James Smith, to deliver a better show and win back their Los Angeles/Orange County fan-following. Based on the two performances, it’s safe to say that their set here at the Grove was miles ahead in every aspect, with Darren James Smith putting on a more graceful, controlled and confident performance on vocals, and Jake E. Lee exhibiting a lot more energy on stage, showing that he’s clearly enjoying being back in the spotlight and playing guitar for fans of heavy music. 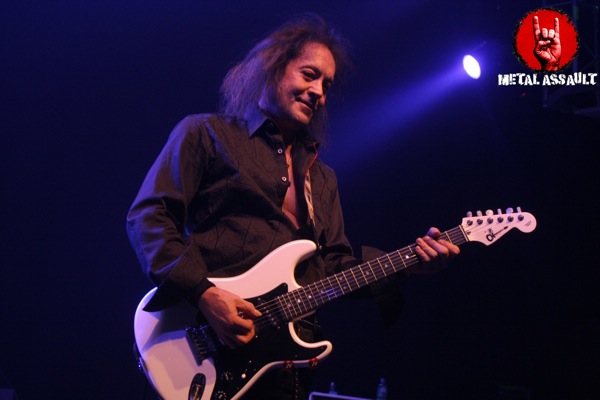 With that being said, while the set was a lot better than the one at the Whisky, one gets a feeling it could still rise further in its level of intensity and quality. There is no denying that Jake E. Lee is definitely getting back into the groove with his guitar playing, and fans of his contributions to Ozzy and Badlands are loving the fact that he has made a return, but by his own admission he’s not at his absolute best yet, and one gets a feeling he’ll reach an even higher level of performance the next time he plays a show in these parts.

Overall, the Heineken NAMM Jam treated the audience to a very enjoyable show rife with diversity in heavy music, and attendees will look forward to an equally great event next year.

Check out a slideshow of 22 Red Dragon Cartel photos below: