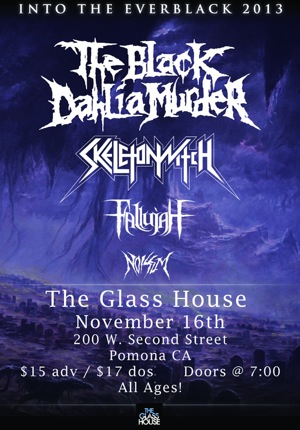 November 16th 2013, The Glass House, Pomona CA: Michigan-based extreme metal band The Black Dahlia Murder are currently on a North American headline tour, with support coming from Ohio blackened thrashers Skeletonwitch and San Francisco technical death metal band Fallujah. Baltimore-based death/thrash youngsters Noisem were supposed to be the opening act but unfortunately had to drop out of the tour a couple of days ago after a van accident in South Lake Tahoe. So the lineup was reduced to three bands, but the crowd here at the Glass House was obviously going to consist of a majority of Black Dahlia Murder fans, as was evident from the sold-out status of the venue well in advance of the show. The fans started gathering to form a queue at around 5 PM, and by the time doors opened at 7, this queue was stretching down the entire block.

This was my first show at the Glass House since returning to Los Angeles seven months ago, so upon entering I scoped out the surroundings to see if anything had changed. Sure enough, they were serving alcohol now, which I don’t remember them doing in the past. Also, access to the bar next door was now opened up from inside the venue itself, and the merchandise stands were moved from the lobby to the balcony. Although quite a bit far out from the heart of Los Angeles, coming to this venue has always been a pleasant experience for the concert goer because of its more relaxed, laid-back atmosphere in comparison to venues on the Sunset Strip. From what I’ve heard, the bands love playing here too. The room was filling up with people rather rapidly and all was in readiness for the show to begin.

Fallujah started things off at 8 PM with a 25-minute set. I remember seeing this extreme metal band at a tiny place called the Airliner back in May when they toured with Gorod. On that occasion they put on an impressive show, but somehow the same vibe couldn’t be felt last night. They weren’t quite able to capture the much larger stage here at the Glass House with the same level of impact. Musically they sounded good except for the vocals cutting out during the first two songs, but they definitely need to raise their stage presence if they aim to impress big crowds in large-sized venues like this one. Having said that, a few of the Black Dahlia Murder fans were certainly able to appreciate Fallujah’s music owing to some of the similarities between the two bands, so they didn’t turn out to be a bad opener by any means.

Soon after, Ohio’s finest metal exports Skeletonwitch adorned this stage with a performance as relentlessly intense as I’ve ever seen them deliver. Even for a person who’s seen them numerous times in the past, Skeletonwitch’s live show simply never gets tiring. With a non-stop sequence of short, fast-paced tunes that treated the audience last night with in-your-face brutality but at the same time offered plenty musically, these guys did not mess around. The biggest difference between this show and their past gigs in the Los Angeles area, of course, was the addition of material from their latest album ‘Serpents Unleashed’, yet another killer release from this band that continues to go from strength to strength. With each new album, their live show seems to get stronger, and that was exactly the case with the influx of songs like ‘Serpents Unleashed’, ‘I Am Of Death’ and ‘Burned From Bone’. The handful of longtime Skeletonwitch fans in the crowd were more than thrilled to get a hefty 45-minute set with an equal dose of all four studio albums, and lost their minds as soon as the band got into tunes off of Beyond The Permafrost such as its title track and ‘Upon Wings Of Black’, while ‘Repulsive Salvation’ and ‘Crushed Beyond Dust’ off of Breathing The Fire were just as enjoyable. Chance Garnette proved himself as one of the most powerful frontmen in modern metal, and his band mates nailed it on their respective instruments. They ended with an old gem called ‘Within My Blood’ which brought out the ever-awesome Evan Linger bass solo as well. ‘We’ll be back in Los Angeles in February, with a band called Amon Amarth. Until then, eat some fucking pussy!’ said Chance Garnette as the band ended their amazing set. Skeletonwitch are ending yet another successful year on a high with this tour, but 2014 promises to be the best year. If you like extreme metal and aren’t familiar with Skeletonwitch, check them out. They will change your life.

Set List:
1. Erased and Forgotten
2. This Horrifying Force (The Desire to Kill)
3. Reduced To The Failure of Prayer
4. Serpents Unleashed
5. Choke Upon Betrayal
6. Burned from Bone
7. Repulsive Salvation
8. Of Ash and Torment
9. Crushed Beyond Dust
10.Upon Wings of Black
11.Beyond the Permafrost
12.I Am of Death (Hell Has Arrived)
13.Within My Blood

After Skeletonwitch’s set, I retreated to the balcony to get a better look at this audience which was eagerly waiting in anticipation of The Black Dahlia Murder hitting the stage. At 9:45 PM, the band members walked up on stage one by one amidst huge roars and chants from their fans, and the moment they kicked off their 90-minute set, waves of people could be seen moving closer to the stage all at once. A few years back, I used to think of The Black Dahlia Murder as a cool band and even purchased a shirt of theirs back in those days, but between then and now I’ve expanded my musical tastes and knowledge to the extent that there are quite a lot of bands that are, in my opinion, better than The Black Dahlia Murder. But regardless, I decided to check out their set in the hope of getting impressed. Unfortunately that wasn’t the case and their performance did absolutely nothing for me. It was monotonous and uninspiring, to say the least. I have nothing against them, I’m sure they are individually all great musicians, and they deserve the success they’ve achieved. But for me last night, their set was just one of those things where it was more interesting to watch the crowd rather than the band itself. If you’ve never heard of this band, I personally wouldn’t recommend you to check them out. But it was clear from the sold-out show here that they already have a devout group of fans, and my opinion of theirs isn’t going to change anyone’s mind.

Overall, it was a fun show and it’s fair to say that Skeletonwitch were the best by a long distance and blew away the other two bands off the stage. If you get a chance to see this tour, do it.