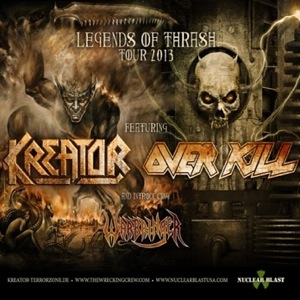 November 15th 2013, City National Grove Of Anaheim, Anaheim CA: In a union of three very distinct styles and attitudes of thrash metal from Germany, New Jersey and California, the ‘Legends Of Thrash’ tour featuring Kreator, Overkill and Warbringer began on the US East Coast in late October, pummeled through Canada and made its way to the Grove of Anaheim last night for its only Southern California appearance. Kreator and Overkill were switching headline slots according to whoever had a stronger fan base the territory they were in, and for this show Kreator was the headline act, as was perhaps appropriate  judging from the pre-show excitement being generally higher for Kreator than for any other band. With that said, the show promised to be the thrash fest of the year, one that everyone in attendance could enjoy from start to finish.

Los Angeles’ very own Warbringer began the show at 8 PM with a typically impressive 30-minute set. These boys have been laying low for the past few months as they were working on their new album ‘IV: Empires Collapse’ which came out last month, and this was their first Southern California gig since the headline show at the Whisky as far back as May of this year, aside from their second-stage set at The Battle Of San Bernardino in September. The seven-song set was heavily laden with the new material. While still incorporating all the elements they’ve been known, Warbringer have come out with a darker, more dynamic and diverse album this time and it showed in the live renditions of the four new songs ‘The Turning Of The Gears’, ‘Hunter-Seeker’, ‘Scars Remain’ and ‘Towers Of The Serpent’ last night. Vocalist John Kevill was in his usual element, well assisted by his band mates, and the crowd gave the quintet a fitting response, specially during ‘Living In A Whirlwind’ with a mosh pit that was very appropriate for the song’s title. Being on an all-thrash lineup such as this, the onus was on Warbringer to be a worthy opening act, and they certainly were.

Set List:
1. Living Weapon
2. Severed Reality
3. The Turning of the Gears
4. Hunter-Seeker
5. Living in a Whirlwind
6. Scars Remain
7. Towers of the Serpent

After a short 20-minute intermission, the stage was set for Overkill to conquer. Like Warbringer, the New Jersey thrash veterans played the second stage at the ‘Battle Of San Bernardino‘ show in September, but I don’t even count that as an Overkill performance for reasons aplenty. So, this was effectively their first show in these parts since the Testament-Overkill tour at the beginning of 2013, and my first time seeing them proper in three-and-a-half excruciatingly long years, the last time being their headline show at the House of Blues Sunset Strip on April 20th, 2010. I still remember their absolute thrashterpiece of a performance from that night. Last night was no different in that regard, and despite a couple of technical issues with the monitors and Dave Linsk’s guitar, they brought their A-game to this stage with a set filled to the brim with blissful thrash.

Even though their two latest albums The Electric Age and Ironbound are quite fantastic in every sense, they mostly focussed on covering the early years of their discography, probably because they were the ‘support act’ here and were playing to a crowd wherein majority wasn’t their fan base. Old classics like ‘Hammerhead’, ‘Rotten To The Core’, ‘Hello From The Gutter’, ‘Elimination’ and ‘Fuck You’ were immensely fun to sing along to, while ‘Necroshine’ was highly enjoyable in its own right as it infused a different vibe with the slower, groovier late ’90s Overkill sound. This set was sparsely populated with the newer songs, and ‘Bring Me The Night’, ‘Electric Rattlesnake’ and ‘Ironbound’ were the only ones from this category, all three sounding as fierce as they do on their respective studio versions. One glaring omission was ‘The Green And Black’, the opening tune of Ironbound, but other than that, this was a very well-chosen set of songs performed exactly the way they require to be. The ever-energetic Bobby Blitz brought his entire on-stage personality last night. He, in my opinion, is the best thrash frontman in today’s times and his performance last night was simply vindicated that. Bassist D.D. Verni laid down his signature bass sound and did the job on backing vocals as well, with guitarists Dave Linsk & Derek Tailer and drummer Ron Lipnicki rounding off the lineup for this tremendous band and combining to deliver the goods for all thrash heads present here. Unfortunately, Overkill fans were few and far between at this venue and the band didn’t get anywhere near the kind of response I thought this set were worthy of. And for that reason, one of my new goals is to see them do a headline show in New Jersey, to be part of an entire crowd of Overkill’s hometown fans.

At 10:30, the lights went out and the ‘Mars Mantra’ intro tape rolled along on the PA, signaling the arrival of the mighty Kreator. They began with two songs off of their latest album Phantom Antichrist, the title song and ‘From Flood To Fire’, but following that they got into the older material, and complete mayhem ensued in this venue with two giant moshpits, one each in the two front-most sections of the general admission floor. The crushing one-two punch of ‘Endless Pain’ and ‘Pleasure To Kill’ back-to-back in the first half of the set was perhaps the highlight of the set, and it’s probably safe to say that the 14-song set did not disappoint any Kreator fan in this audience. The Mille Petrozza-led Kreator have put on some terrific performances in Southern California in the recent past, and they nailed it last night as well with a comprehensive set of tunes old and new, played with a degree of intensity only Kreator are capable of attaining.

Amidst the fast-paced bestiality of Kreator’s typical tunes was a little flamenco guitar solo by guitarist Sami Yli-Sirniö was an extremely nice touch and came as a welcome break from all the madness surrounding everything else they played last night. But ‘Riot Of Violence’ kick-started the mosh pits once again, and things were back to normal. ‘Music brings people together, while religion and politics pull them apart’, shouted Mille Petrozza, drawing a huge cheer from the crowd and leading perfectly into ‘Enemy Of God’. The final portion of the set consisted of fan favorites like ‘Phobia’ and ‘Violent Revolution’ mixed in with two more Phantom Antichrist tunes. Before proceeding to play the last two songs of the night, Petrozza raised the flag of hate and repeatedly urged the crowd to raise their voices. He wasn’t satisfied until he got everyone from the front to the very back on his side, and one that was successfully achieved, Kreator ended the show with ‘Flag Of Hate’ and ‘Tormentor’. A typically excellent set by Kreator. This band just does not disappoint.

Overall, this lineup fulfilled its promise of giving the attendees the best thrash show of the year. It was the first time I witnessed a Teutonic thrash legend together with two American thrash bands one each from the East and West Coast, the first opportunity for me to put Teutonic thrash up against American thrash, and to compare them first-hand purely based on live performance. At the risk of offending any Kreator/Teutonic thrash fans reading this, I would hereby like to declare my allegiance to American thrash. Don’t get me wrong, I love the Teutonic variety of the genre as much as anyone, specially Kreator, but last night I just felt the American bands had more of a fun, foot-stomping, sing-along element to their live music that really resonated with me and had a greater impact as a result. Regardless of which style you prefer, if you love thrash and get a chance to see this tour over the next week or so, do not miss it.