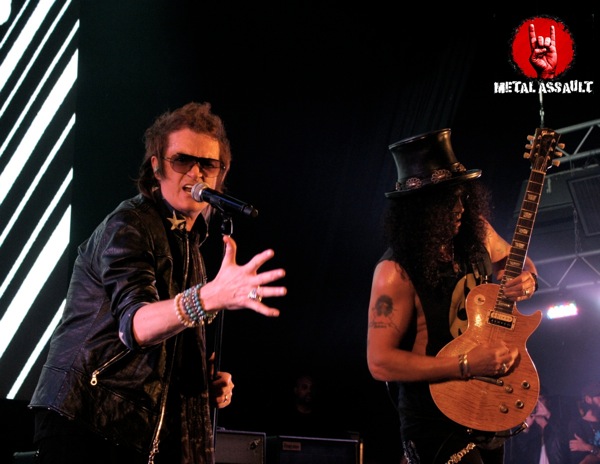 November 18th 2013, The Avalon, Hollywood CA: Kings Of Chaos is a touring all-star hard rock supergroup comprising of some of the most popular names in the genre including former members of Guns N’ Roses Slash, Duff McKagan and Matt Sorum along with Glenn Hughes, Corey Taylor, Steve Stevens and many others. They began under the name Rock N’ Roll All-Stars and played shows in Australia, South and Central America last year before changing their name to Kings Of Chaos and carrying on with the same goal, to perform tunes belonging to the bands these members are from, plus some of rock’s biggest hits. Last night at the Avalon in Hollywood, they played their only North America show of 2013, as a benefit gig for Ric O’Barry’s Dolphin Project.

The show was sold out in advance, so the attendance was expectedly great and people were lined up outside the venue since long before the doors opened, at 8 PM. After a slight delay, the event’s proceedings began at 9:30 as the screen in the backdrop of the stage lit up and an introductory video about dolphins was played, including appearances from a few Hollywood celebrities preaching the importance of saving dolphins. Following this ideal start to the event, Matt Sorum appeared on stage (in picture above), and having played a prominent role in the attempt to save dolphins in Japan in the recent past, he appropriately took charge at this event and led the way. He gave us a brief insight into what this dolphin project is all about, and urged everyone to give it a thought. Then he went on to bring out the other four members of his new five-piece band Fierce Joy and played a song called The Sea, from their upcoming album Stratosphere which is slated for a February 2014 release.

Next up, there was a 15-minute video narrating the story of the man himself, Ric O’Barry and his journey with dolphins over the past five decades. At the end of the video, Sorum reappeared on stage to welcome O’Barry onto the stage, who was greeted with generous applause by this audience who had by now realized what kind of effort he had made in this endeavor, through the video that was just played. O’Barry kept his speech short, and included a joke about being chased by police in Japan, not to get arrested, but because they were Matt Sorum fans. Before departing the stage he brought on a singer/songwriter/environmentalist by the name of Ariele, who played three songs donning an electric guitar with her two band mates on acoustic guitar. It was not rock n’ roll by any means, specially because she hardly made any use of her guitar, but her voice is undeniably beautiful and the audience appreciated her for that more than anything else.

People had traveled from places like Brazil, Russia and Sweden to attend this show, and things were about to turn up a few notches to make it worth their trip as Glenn Hughes came out with his short but absolutely jaw-dropping solo act, with a fantastic rendition of Deep Purple’s ‘Mistreated’, obliging the special request by Ric O’Barry’s son Lincoln. He truly is one of the greatest singers in rock n’ roll today, and if anyone needed further proof, his performance last night provided it. The audience was awe-struck by Hughes’ incredible vocal range, the highs he was able to reach, and the sheer expression in his face and voice that really seemed like it was coming from within him. His solo act consisted of only that solitary song, but there was a lot more of Hughes to come yet, as our headliners were getting ready to hit the stage.

Hughes led them out as he sang the first two songs of Kings Of Chaos‘ stellar set, opening up with two Deep Purple tunes ‘Highway Star’ and ‘Smoke On The Water’. The lineup at this point included Steve Stevens on guitar with Duff McKagan on bass and Matt Sorum on drums, and after these two songs, Corey Taylor came out amidst huge cheers and did three songs, Billy Idol’s ‘Rebel Yell’ and two Guns N’ Roses songs ‘Mr. Brownstone’ and ‘It’s So Easy’. As expected, Slash joined the band on stage to play guitar for these tunes, and he stayed in his position on stage left for the rest of the night, performing with utmost aplomb and minimal expression and energy, just letting his guitar do all the talking.

Singer/actress Juliette Lewis was the next singer to take the stage, lending a sleazy female element and a burst of wild energy into the show, singing the appropriately chosen AC/DC song ‘Dirty Deeds’. After her brief stint and quick exit, Glenn Hughes reappeared with yet another Deep Purple song ‘Burn’, following which the band did two Led Zeppelin tunes ‘Communication Breakdown’ and ‘Immigrant Song’, with Franky Perez doing the vocals instead of Glenn Hughes for the latter. Hughes, Taylor and Perez alternated amongst themselves to sing the remaining four songs, but there was one major surprise. Before the two-song encore, Matt Sorum introduced a ‘special’ guest onto the stage, none other than Billy Ray Cyrus. Yes, you read it right. The possibility of seeing Billy Ray Cyrus at a rock n’ roll show of this kind had to be minimal and close to zero, but in front of a completely shocked and bewildered audience, Cyrus came up to do backing vocals for the final part of the show and seemed like he was having a blast doing so.

The set list was more or less generic in terms of the songs chosen, but that was perhaps the requirement for this gig, as the audience clearly wanted to hear songs they were already very familiar with. Performance-wise, each and every one of these well-seasoned musicians pulled their weight on that stage, putting on a thoroughly professional performance, giving these hit tunes the treatment they deserved. In all honesty, Glenn Hughes stole the show with his spellbinding voice and stage presence, while all other singers and musicians did their bit to ignite this crowd as well, Corey Taylor in particular genuinely looking like he was enjoying himself immensely, transferring that energy and enthusiasm onto the crowd in the process.

Overall, it was a cool event for the audience to witness, and for a great cause. Aside from the names it consists of, as a band Kings Of Chaos was largely an unknown entity for the paying audience, and based on this performance they would certainly they got their money’s worth. With the prospect of more gigs such as these in the near and long-term future, Kings Of Chaos promises to become the most high-profile cover band on the planet.

Check out a full photo gallery from the event below: