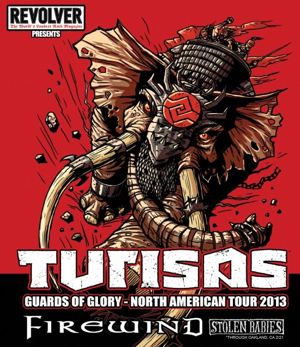 February 22nd 2013, Key Club, Hollywood CA: After making a triumphant run through the U.S. nearly a year ago on the annual ‘PaganFest’ tour, Finland’s Turisas have returned on a headlining tour with Greek power metal warriors Firewind. The pair have been utilizing local openers on the many stops of this tour, and this date at the Key Club in Hollywood was no different. Though the venues on the Sunset Strip tend to make poor choices with the local acts more often than not, the Key Club managed to put together a great lineup for this show. This ‘Guards of Glory’ tour stop proved to be a consistently entertaining night for fans of fantasy-laced epic heavy metal, and a joyous celebration of everything over the top, silly, geeky, and plain awesome about this music and its culture.

The first of the four local acts was Mordor, a self-described pagan metal act. The four members were decked out in facepaint not unlike the headliners, but played a much heavier brand of metal. Mordor’s musical sound deviated more towards early viking black metal like Enslaved or Bathory, but the act’s lyrical references went across the whole spectrum of fantasy lore. Even the Warcraft video game series was given a nod at one point in their set. The band still has a bit to work on when it comes to their stage presence- the two guitarists and bassist onstage were mostly stoic throughout, but Mordor has a very enjoyable set of songs, and were a fine fit for this show.

Next up was Helsott, who received a very warm and enthusiastic reception from the crowd. Helsott shirts were a common sight in the audience, and a few folks on the floor offered an admirable pit throughout the set. Helsott’s viking themed death metal was channeled through the voice of Eric Dow, who proved to be an extremely charismatic presence. It was also nice to see the band offering a unique setlist for this show, including one track that supposedly hadn’t been played in two years and the second part to “Vandals Divide”. Though having backing tracks play over the P.A. seemed a bit unnecessary, Helsott’s energy and enthusiasm was infectious, and the band’s viking metal was again a fantastic fit for the bill this night.

The melodic death metal from Sirion was the final dose of genuinely very ‘heavy’ music for this show. The band offered a tight and energetic performance, though one guitarist ran into a bit of trouble with his pedal system. This caused a bit of feedback and screeching that was distracting, but not a deal-breaker when it came to the set. They capped things off with an Ensiferum cover, “Battle Song”. It was a fun choice to get the crowd moving, and a nice way to reward fans for checking out the local acts.

The final local act was something truly amazing- The Dread Crew of Oddwood from San Diego. Though they donned pirate outfits throughout the entire night (yes, even before and after their set), don’t call them pirate metal. In fact, there was nothing even remotely metal about their music other than the uptempo drumming. Traditional vintage pirate instruments were the tools of expression here: on hand were a toy box piano, two mandolins, a violin, a flute, an upright bass and an accordion. The music was the closest thing to original pirate music one will probably hear outside of a theme park or birthday party, and it was obvious that the seven or eight guys onstage were having the time of their lives. As for me, I couldn’t help but wear a huge grin for the half hour that The Dread Crew played. The crowd seemed to enjoy it too, they could be seen jumping about like lunatics for much of the set. Though the pirate theme was a bit of an outlier among the more fantasy-based themes from the other bands, the sheer amount of fun that The Dread Crew of Oddwood brought simply couldn’t be denied.

After a genuinely great batch of local openers, Firewind was the first headlining act to take the stage. Firewind were the odd band out on this bill- their earnest old school power metal stood in contrast to the epic fantasy metal offered by the other acts. This wasn’t anything like placing a death metal act in the middle of a hard rock show though, it’s easy to imagine folk and viking metal fans easily enjoying Firewind. For fans of the band in the crowd though, the big question was whether new singer Kelly Sundown Carpenter would do justice to the legacy of his newly departed predecessor, Apollo Papathanasio. The answer is a resounding yes and then some: Kelly gave an absolutely outstanding performance for the fifty minutes that Firewind was onstage. His husky yet soulful wail brought to mind the more aggressive moments from Jorn Lande and Russell Allen- given that these guys are two of the best melodic metal vocalists in the world, there isn’t a higher compliment I could think of. Fans looking for a direct emulation of Apollo were likely disappointed, but for everyone else Kelly provided a more than wonderful voice for these songs. Here’s hoping that the guy sticks around for good.

Though Kelly assumed singing duties, it was guitarist Gus G who assumed the frontman role. Gus was usually the one to chat with or pump up the crowd, and the rest of the band often retreated to the back of the stage to let him take the spotlight. The guy certainly deserved it, as his soloing was simply out of this world. Gus’ duels with keyboardist/guitarist Bob Katsionis were consistently mindboggling, and his confident command over the small Key Club stage was great to see- the instrumental “The Fire and the Fury” proved to be the perfect showcase for their prowess. The set nicely covered most of Firewind’s records, and was more than ample for the fifty minutes they were onstage.

The band nearly everyone in the crowd had come to see, Turisas, took the stage after a wait that was much too long. By the time they did arrive though, the Key Club was solidly packed, despite the concurrent presence of Doro Pesch just down the street. Turisas provided ninety minutes of some of best battle metal around, and had the crowd cheering wildly after every single song. Singer Mathias Nygard was an amazingly energetic and charismatic presence, and his chats with the crowd were always fun and entertaining. Mathias even offered his beer to one lucky member of the audience; of course, he did this just before Turisas’ ode to beer, “One More”. Olli Vanska’s violin playing was also a total pleasure to watch, the guy can shred. Quite literally actually, as the horsehairs on his bow were torn up by the end of the set. Olli was also given a brief showcase piece with backing from the rest of the band, which was far better than an unaccompanied solo as far too many bands opt to do.

Mathias’ voice was in perfect shape throughout the entire set, and he even made a successful return to his rough harsher vocals for “Battle Metal”, which sent the crowd into a frenzy. Really though, every one of these musicians offered enthusiastic performances. Bassist Jesper Anastasiadis especially was always smiling, and made sure to high five fans in the front as often as he could. Even after the set was over, the members of Turisas were hugging each other and patting each other on the back, but not before giving a handshake to every single patron who wanted one. I honestly don’t think I have ever seen a band have so much fun onstage and openly express that joy to each other and the fans in as earnest and sincere a way as Turisas did this night.

This was a show where one could deck themselves out in red paint, wear a kilt in public, dress up as a pirate and sing along with tales of Norse battles and village plundering with total conviction and sincerity. It was a more than welcome change of pace after going to so many shows where kids wore patch jacket uniforms just so that they looked like everyone else- this show was a celebration of individuality and being weird in ones own special way. The lineup was a perfect manifestation of this idea, featuring a wide variety of styles and sounds, yet still managing to be extremely successful. All in all, this was as close to a perfect night of left-field epic music as one could ask for, and it’s hard to imagine any Turisas fans walking away unhappy from this show. One can only hope that this kind of concert will repeat itself when Turisas eventually return to support their upcoming record.