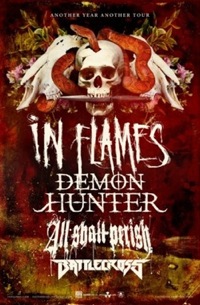 Editor’s Note: After an extensive North American run as support act to Lamb Of God last fall, Swedish melodic death metal veterans In Flames are back in the continent on a headline run of their own, with support from Demon Hunter, All Shall Perish and Battlecross. They performed at the House of Blues in San Diego as part of this tour, and our newest contributer Spike Steffenhagen was in attendance. Below is his review of the In Flames set, along with a photo from the gig, provided by Chad Alexander. Please note that Spike wasn’t able to watch any of the opening acts, so his review is on the In Flames performance only.

February 13th 2013, House Of Blues, San Diego CA: No band from the mid 90’s Swedish Metal Invasion generates as much debate as In Flames. Once hailed as the masters of melodic death metal, their forays into Nu Metal and experimentation with synthesizers had many fans checking out after 2000’s “Clayman.”

In Flames and the fans who have stuck with them have never appeared to give a shit about living in the past and this show was no exception. 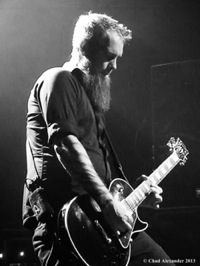 Almost half of the 16 song set list was drawn from their latest release, “Sounds Of A Playground Fading”. Songs from older albums fit in a cohesive and explosive set that built on the energetic performances that the band is known for. Songs such as “Embody The Invisible” from 1999’s “Colony” fit seamlessly with newer material.

As bands move forward in their careers, jaded fans tend to be dismissive and long for “the good old days” when their favorite band was a cultish secret and sold less than ten CDs. For those who appreciate a kick ass metal show, In Flames once again proved that the good times are far from over.

Set List:
Sounds of a Playground Fading
Where the Dead Ships Dwell
Pinball Map
Drifter
Embody the Invisible
Cloud Connected
The Hive
Ropes
Fear Is the Weakness
The Quiet Place
All for Me
The Mirror’s Truth
System
Deliver Us
Take This Life
My Sweet Shadow