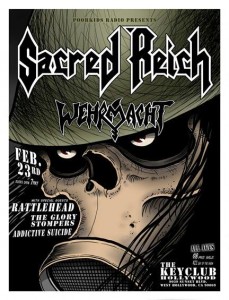 February 23rd 2013, Key Club, Hollywood CA: In today’s heavy metal market, many older thrash metal bands are finding a career touring their asses off and have been cranking out some damn fine records. Death Angel, Overkill, Testament and Kreator are just a few acts outside of the Big Four that have managed to thrive despite the crazy state of the music industry these days. Phoenix, AR’s Sacred Reich have proudly kept their recent activity to a minimum however. After reuniting in 2007 for the annual Wacken Open Air festival, the band has stuck to short strings of dates here and there, and have avoided recording any new material. After making a disappointingly brief appearance at the Metal Blade anniversary show last November, Sacred Reich returned for their first headlining show in Los Angeles in sixteen years. The result was a show with very strong support from its opening acts, and a decent set from its headliner.

The promoter for this show, Poor Kids Radio, has been putting together some truly outstanding concert bills as of late. These bills have often celebrated the history of fast and heavy music from Southern California by pairing vintage acts with killer new ones, and this one was no different. It was obvious that the first act, L.A.’s The Glory Stompers, weren’t chosen by Poor Kids Radio however. Their modern hard rock was a far cry from the other acts on this night, and didn’t elicit much of a reaction from the thrash-obsessed crowd. The band carried a good deal of energy and enthusiasm onstage, but they would have been much more welcome at a Godsmack or Disturbed concert than a Sacred Reich show. Soon after though, Addictive Suicide, also hailing from L.A., ended up kicking some life into the idle crowd. The band’s mix of hardcore punk and thrash was the perfect wake-up call for this audience, and ignited some action on the open floor. By the time Addictive Suicide played their last song, the pit was in full force and the patch-jacket clad thrash babies were giving them the attention the deserved.

What came next was something I’ve learned to count on over the last couple of years: a killer Witchaven set. The band raged through a short, yet utterly flawless half hour of the some of the best blackened d-beat thrash around, and offered what was easily the best show I’ve seen from them yet. As always, the performance was perfect- Henry Montoya’s vocals were consistently on point, Erik Sneve’s soloing added a new dimension to the older tracks from Terrorstorm, and drummer Lerby Sanchez and bassist Mark Ryder held down the backline like no other (I’m fairly certain Lerby’s right hand was imported straight out of hell). When it comes to a Witchaven show, the main variables are the sound and the crowd- you’ll never see a less than stellar performance from these guys. For this show, one couldn’t find a flaw in the sound even if they tried their hardest. Henry’s vocals were appropriately murky and drenched in reverb, and every one of Lerby’s hits thundered through the club. Not even an amp issue on Henry’s end was enough to cause a blemish upon the show. Much to my surprise, the audience was simply insane for this set. The moshing was abundant from the first song onward, and it only grew and grew until reaching a jaw-dropping peak during “Unholy Copulation”. Sheer insanity was the sight here. Witchaven also showed off a new track, “Homeless”, from their upcoming second record at this show. For this track, Henry’s vocals resembled a punky shout instead of the old school black metal shriek he’s known for, and the song gave off a very NWOBHM-on-crack vibe for lack of a better phrase. It’ll be tough for Witchaven to play a show that tops this one, but at least it looks like everyone can look forward to one hell of a second album from these guys if “Homeless” was any indication of quality.

Fans of obscure ’80s hardcore punk and crossover were in for a real treat with the next set. Portland, OR’s Wehrmacht made a long trip down the coast and delivered a tight, no-nonsense set of legit old-school crossover thrash. In only forty five minutes, the band banged out fourteen tracks from their first two records and one new song. The stagediving was easily the most active I have ever seen at a show. Kids would go flying literally every other second, and singer Eric Helzer looked to be enjoying every minute of it as he patrolled the stage. Guitarist Marco “Sharko” Zorich usually wore a scowl throughout the set, but the man had an intense look in his face that showed his focus. Minor note: Sharko’s shark guitar was one of the coolest axes I’ve ever seen. Among the older songs, “Napalm Shower” was a definite highlight as was the title track to Biermacht. It was the closing pair of tracks that drew the most insanity and fun from the crowd however. Local crossover legend and ex-Cryptic Slaughter member Scott Peterson joined Wehrmacht for a performance of the Cryptic Slaughter classic “Money Talks”, which saw even more kids stagedive than before and the pit rage in intensity. A huge beer boot was brought out for “United Shoebrothers” and the guys in Wehrmacht, Scott and other friends all took part in the chugging. This was one of the most chaotic, over the top and downright awesome few minutes I’ve seen at a metal show, and it punctuated what was one hell of a set. Wehrmacht played with the hunger and fire of a band half their age and they did what every young band should strive to do: win over the first time listener (which on this night, happened to be me). That’s pretty damn good for a group of 40-somethings.

Sacred Reich finally came on just before midnight and delivered an enjoyable, if somewhat underwhelming set. The performances of the songs themselves were tight and flawless- everyone nailed their parts perfectly, with guitarist Wiley Arnett being the standout as he hit his solos note for note as they were recorded back in the day. At this show, vocalist and bassist Phil Rind sang with more authority and force than any Sacred Reich album ever captured; from an objective standpoint, Sacred Reich played the definitive versions of every one of these songs. For a band that so rarely plays gigs, Sacred Reich played as if they’ve been touring night after night for years. One could easily see the joy in Phil’s face throughout the entire show, the guy was always smiling as was drummer Greg Hall. The sound was also once again fantastic- the Key Club sound crew truly outdid themselves on this night.

There was a sense of complacency given off from the band however. The long breaks between songs, the relatively short set, Phil’s speech about talking for as long as he felt like (and dude certainly took his time with his chats with the crowd), and the band’s lack of visible energy or movement onstage all contributed to the feeling that Sacred Reich weren’t playing to win over anyone. They knew that everyone in the house were fans of the band, and that the folks on the floor had probably been waiting for years and years just to see them. The kids went absolutely crazy though, the stagediving was abundant and the moshing was rampant. Phil thankfully encouraged the stagediving (‘It’s like it’s 1987 all over again!’ was his jolly reasoning), despite a couple morons overstaying their welcome occasionally.

As for the set itself, the band’s classics were appropriately covered as were a smattering of deeper cuts from the first two records. “Independent” was an early highlight, with Greg executing his one-time replacement Dave McClain’s drum part perfectly, and the pit hitting a comfortable stride in action and violence. The band made a rare flub during “Love…Hate”, which caused them to restart the song entirely. It was a surprising error to see, especially given the note-perfect renditions seen otherwise. The band also restarted “Who’s to Blame” in order for Phil to break up a fight happening on the floor. Kudos to Phil for that one. It was a bit disappointing to see Sacred Reich play for only about seventy minutes- this band has one of the most consistent catalogs in thrash, even Independent has aged very nicely after all this time, so they could’ve added nearly any song of theirs (save maybe “31 Flavors”) and been given a positive reception.

In a way, Sacred Reich’s level of success at this show suffered due to the bill. It would be tough for any band to follow the energetic showings from Witchaven and Wehrmacht, and Sacred Reich may have been upstaged a bit as a result. They offered a fine set, but ‘fine’ was certainly a step down from two stellar showings. Hardcore Sacred Reich fans were likely satisfied with the set; the songs were played to perfection and with plenty of happiness behind them, but I couldn’t help but want more when the house lights came up. This was an enjoyable show, and Sacred Reich fans will more than likely be elated upon hearing their favorite songs nailed, but the standouts on this night were the support acts. This was a good show, but it’s too bad that it wasn’t a great one.