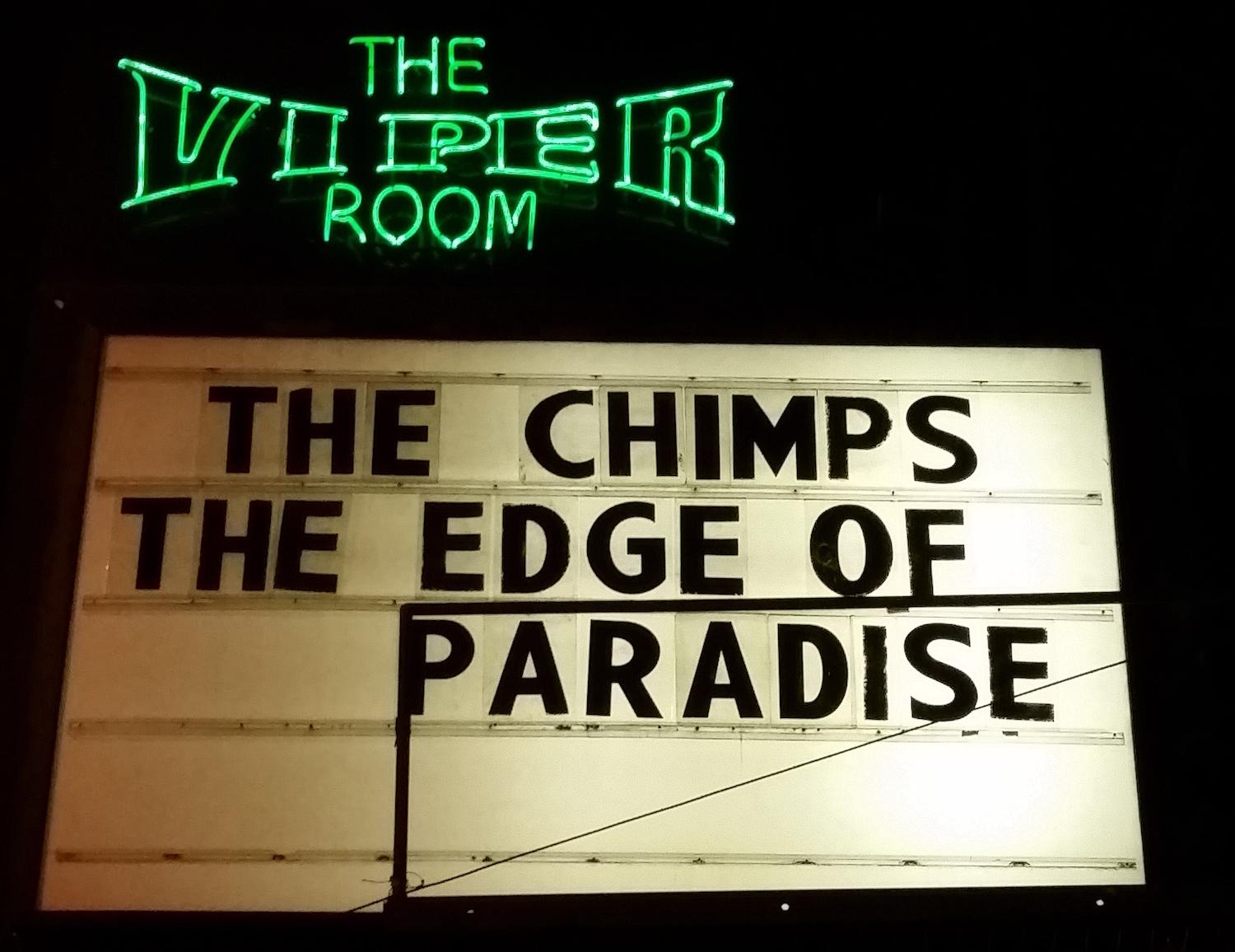 November 6th 2016, The Viper Room, West Hollywood CA: Amidst the plethora of live music entertainment in Los Angeles, as various parts of the city witness national and international touring bands on a nightly basis and most such shows sell out or reach near capacity, local talent often gets overlooked and undermined. On a Sunday night, instead of going out to see an all-local lineup, most people would rather stay in and save up for the touring bands coming through town the week after. LA’s own hard rock/metal community has little to no regard for its hometown bands, unless they become a renowned touring act. By their own admission, Heaven Below and The Edge Of Paradise perhaps find themselves somewhere in the middle, Heaven Below having gained greater recognition of late because of vocalist/guitarist Patrick Kennison joining Lita Ford’s band, and The Edge Of Paradise nearing the end of what’s probably been the most active year of their existence so far, as they extensively toured the States. On Sunday November 6th 2016, both bands took the Viper Room stage for the Heaven Below ‘Good Morning Apocalypse’ album release show, and put on a show deeming them well worthy of some richly deserved attention from locals.

At 8:30, The Edge Of Paradise began proceedings with a highly impressive 7-song, 35-minute set, showcasing singer Margarita Monet’s soaring vocal delivery, fittingly competent musicianship by her band mates Dave Bates (guitar), Nick Ericson (bass) and John Chominsky (drums), compelling stage presence of all members individually and as a group, and a well-orchestrated light show to go with the music. All of their recent touring has clearly made them a more cohesive unit as they sounded more in sync with other in comparison to past local gigs. Playing songs off of their latest full-length ‘Immortal Waltz’ (2015) along with two new singles ‘Shade Of Crazy’ and ‘Alive’, and an unconventional Mötley Crüe cover thrown in for good measure, The Edge Of Paradise pulled off a very diverse and dynamic set and exhibited their progression from old-school melodic metal to incorporate heavier, modern influences on the newer material. The band was formed in 2011 and landed on Metal Assault’s radar immediately as one with great potential, and it’s heartening to note that they’re realizing it now. This was indeed a strong performance that garnered an unusually excellent turnout for being the first band on a Sunday night at the Viper Room. The Edge Of Paradise are by no means your run-of-the-mill local band, and regardless of whether or not LA choses to accept and respect them, they will continue to rise in stature on a global level.

The Edge Of Paradise photos:

Later in the evening, headliners Heaven Below hit the stage for a full 11-song set with selections from all three of their full-length albums, including four off of ‘Good Morning Apocalypse, a concept album released in October 2016. Based on the live renditions of this new material, the songs ‘Nefarious Angels’ and ‘Devilina And The Damage Done’ in particular, the new record certainly comes across as Heaven Below’s best work, but the older songs still hold their worth in a live setting. Just like The Edge Of Paradise, Heaven Below is another band this site noticed very early on, and even in 2010 when they only had one album and one EP to their name, there was something about them that showed promise, resulting mainly from Frontman Patrick Kennison’s talents on vocals and guitar and bassist John Younger’s longstanding musical partnership with him. It is no surprise that Lita Ford noticed Kennison’s skill level and recruited him in her band, but Lita’s busy touring schedule has not dented Heaven Below’s progress, and in fact, has most likely helped him develop new techniques and methods of singing, guitar play and songwriting. The quality evident in the band’s newest set of tunes is a clear indication of this. Their brand of straightforward heavy metal is well-presented and expertly executed, appealing to a radio rock crowd as well as those with heavier musical tastes. Besides, the addition of Void Vator mainman Lucas Kanopa as Kennison’s six-stringed fellow assassin has lent some serious chops to Heaven Below, and together with a rhythm section that packed a solid punch, they scorched this stage with some high-octane, high-intensity, high-energy jams that wowed this crowd.

After playing ten songs of their own, Heaven Below got ready to play a Pantera cover but only if someone dared to join them on stage to sing it. Local metal personality Skum Love stepped up, but they eventually played Accept’s ‘Balls To The Wall’ instead, and thankfully so, as they not only did a mighty fine job of it, but Pantera is very, very overplayed and Accept is not, and one could do with far more ‘Balls To The Wall’ and far less ‘Walk’ or ‘Cowboys From Hell’.

In a pre-show interview, Heaven Below jokingly called themselves the next saviors of hard rock heavy metal, but with such an attractive combination of skill and fire, they may well seriously be just that, at least in this town. 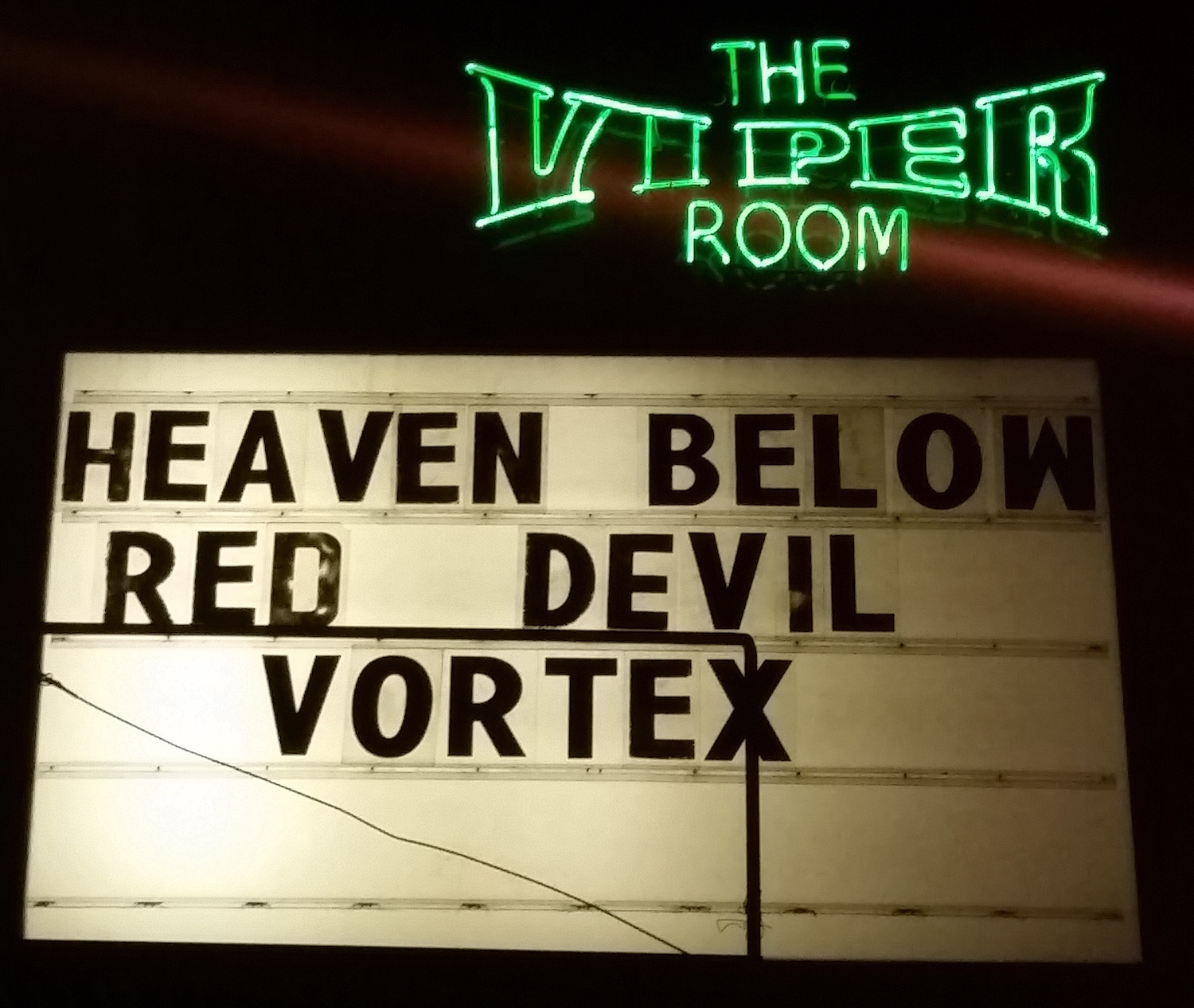