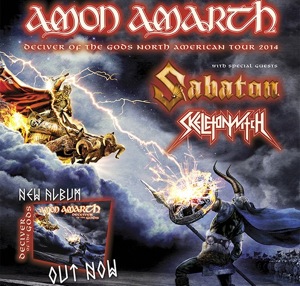 Hailing from Athens, Ohio, blackened thrash metal quintet Skeletonwitch are on fire as a group at the moment, riding on the success of their 2013 Prosthetic Records release ‘Serpents Unleashed’. Having just ended a North American headline run, they’ve joined forces with Swedish metal bands Amon Amarth and Sabaton for another tour which begins today September 25th in Riverside CA (buy tickets). Skeletonwitch headlined the Roxy in West Hollywood last Tuesday September 23rd, more than four years after they last played this venue, and a few hours before they scorched the stage, I sat down with vocalist Chance Garnette for a candid chat about touring, the Johan Hegg inspiration, headline shows, guilty pleasures and the possibility of recording covers. Enjoy the conversation below and catch Skeletonwitch on tour with Amon Amarth.

It’s good to talk to you again, Chance. You guys have been on this headline tour as a lead up to the Amon Amarth run. How’s everything been going?

Everything’s going really well. We have one more show on the headlining run which is tomorrow in San Francisco, and then the very next day starts the Amon Amarth run. We actually had this headlining run booked just by itself, and then when Amon Amarth got with us and asked us if we wanted to do support on their next run, it overlapped a little bit so we just took our headliner, kind of bumped it forward and it just turned into one giant run for ten-and-a-half weeks total (laughs).

So you would have done this tour regardless, then.

Yeah, this was the plan for a long time. We were already set and ready to do a proper Skeletonwitch headliner.

It’s been a while. I think it’s been two years since you did a full headliner, at least out here on the West Coast. You played the Whisky in 2012 on the last one.

Right, we did 63 shows in 65 days on the ‘Forever Abomination’ cycle with Havok. They did all the shows with us and then we split the opener between Early Graves and Mutilation Rites. But yeah, it has been a while!

You already did the first leg of Amon Amarth’s North American tour earlier this year. Their singer has such a giant stage presence. Seeing that every night must be inspirational for you as a frontman.

Johan is very good at what he does. It’s unquestionable, it’s very fun, and you can tell that when he’s having fun he has a huge smile on his face. They’re really great guys to tour with, and yeah man, it’s always good to be challenged. You always should want to do better than you’ve done before, and to be with someone of that caliber definitely strikes a little fire in you and makes you want to do the best you can do, for sure. 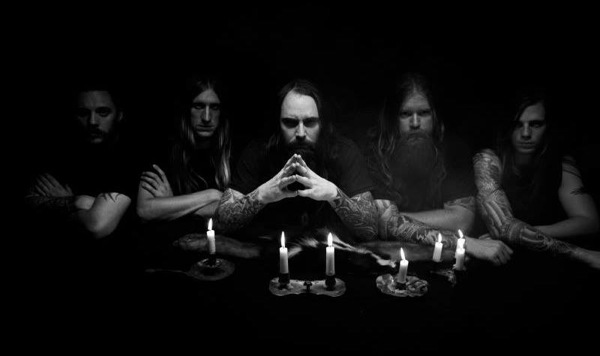 So, did you feel that you bettered your own performances after seeing them during the first few shows of the tour?

Well, I think just by doing this for any real amount of time, you pick up on things that make you go, ‘Oh, that was awesome!’ I mean, you don’t want to rip anyone off and I don’t rip him off by any means and we don’t do the same things (laughs), but just like with anything, it’s on-the-job training, so to speak. You go through it, you live through it, you learn from it, and you should improve and grow from it.

Talking of this run, you’re headlining the Roxy here tonight, which is obviously bigger than the Whisky, the Knitting Factory where I saw you five years ago, and this place called the Ruby Room in San Diego in 2011. Do you sometimes miss the smaller venues and have you gotten to that point of thinking yet?

You know, we’re at a spot right now where it’s not all of one or all of the other. Just on this tour the little spot we played in Buffalo held a 100 people, and tonight is 550. We get to start again with Amon Amarth in a couple of days, and that’ll be in an even bigger room. We’re covering all bases, so I never really get the opportunity to be home sick for the little rooms, because I definitely get to (laughs), and the same goes for theatres. So I’m totally satisfied with the rooms we’re playing in.

It also depends on what part of the country it is, because obviously in some places you get to play the bigger venues, like in LA.

Yeah, for sure. Just take Little Rock, Arkansas for example. It’s pretty much always dead. The reason why I pick Little Rock is because Nate and I grew up there. So when we got to come back and play the clubs in Little Rock and be like, ‘We went to elementary school here. I wonder how it’ll be!’ It’s just a tiny town that time forgot. You’re either going to play one venue that’s too big so it can accommodate every act, or you’re going to play a little closet.

The last time you played here at the Roxy, you headlined a Scion Rock Show with Doomriders. That was four-and-a-half years ago, man. Do you remember that show?

Yeah, because we were definitely talking about whether we’ve played here before. It wasn’t on a tour, so we were like, ‘When was that?’ But Nate has a memory like an elephant, and he remembered that Scion flew us out for that show. He could probably tell you what month and day of the week it was. He’s way better than me, because doing the show was just about as far as I could remember. But yeah, it was for Scion. We might have done a show in Atlanta the day before too.

On this tour, as you said, it’s probably the first time since that Havok tour that you’ve come out with a proper support package, Ghoul and Black Anvil. As for Ghoul I’m not sure if you’re aware but in LA those guys are fucking legends. They can headline this venue on their own. Have you played with them ever before, on tours or one-offs?

No we haven’t. Only on this tour have we ever played with Ghoul. I think the package as a whole is really interesting and gives everyone something to go home and think it was totally worth it. Skeletonwitch, Ghoul, Black Anvil, it’s not all the same, it’s not just one type of music over and over for three bands. But then again, it’s not like one of these bands is way different. It’s all metal, it’s a good fun package. It’s interesting but not ridiculous.

I don’t think you’ve done any ‘ridiculous’ touring with bands that don’t fit with you at all, as an opener or headliner, right?

I mean, there’s been some tours where we were kind of the sore thumb, but sometimes that’s a good thing. I won’t name names, but you’ll definitely know when you get an offer and it’s wrong, and you just pass!

I interviewed your drummer Dustin Boltjes at the show last year in Pomona and he was telling me about how much he loves the LA glam metal stuff, seriously and not as a joke or anything. On that note I wanted to ask you, do you have any guilty pleasures in music?

I love Monster Ballads. I grew up in the 80s and hair metal is a huge part of my cassette collection, bands like Kix and Poison, and of course Guns ‘N Roses, Mötley Crüe and WASP, and shit, Brittney Fox, Ratt, LA Guns, Faster Pussycat, White Lion, I had all of that shit and I own every Monster Ballads collection that exists, Monster Ballads 1, 2, Platinum, Ultimate Platinum, I have them all (laughs). Dustin and I see eye to eye more than anyone in the band as far as glam rock and 80s rock goes. Then there’s also Quiet Riot, Slaughter, I could just go on for forever. I don’t want to leave someone out. I like it all, so just don’t hit me up with ‘What about them?’ (laughs)

LA Guns actually played at the Whisky last Saturday night for the Sunset Strip Music Festival. They sounded great, I thought. You also mentioned WASP and I think that’s my favorite band of that genre. Their self-titled album is just legendary.

Again going back to your drummer, he has a cover band called Iron Diamond based locally in Indianapolis. If you had to be in a cover/tribute band, what band would you pay tribute to?

Man, that’s a good question. If you’ve noticed, Skeletonwitch has never recorded a cover. One reason for that is, collectively we believe that it’s just going to be a karaoke version of the general. I don’t want to just be like, ‘I can do it too!’ We’ve talked about what cover we would play, and EJ Johantgen, owner of Prosthetic Records who is sitting right in front of me, always told us to do a cover as a B-side. But we just never wanted to do it. For that reason, I don’t want to do some version of it unless I did something way out of the box, like fucking Charlie Daniels band’s Woolie Swamp. But then it’s just goofy because it’s a Charlie Daniels cover. So, I don’t know man, I think I’d just like to leave the music that I love alone and let who did it do it, and not try to just copy it. I know Dustin does it because it’s a blast and he has an awesome time doing it. That is what it is, and he’s doing it for the right reasons. He’s not doing it to do it better, he just loves it. But for Skeletonwitch, I want my focus in my writing, and I just want to do this. I don’t really see a cover in our future, but we all have agreed that if we did one, which one it would be. I’m not going to say (laughs), but there’s only been one that’s been perfect. 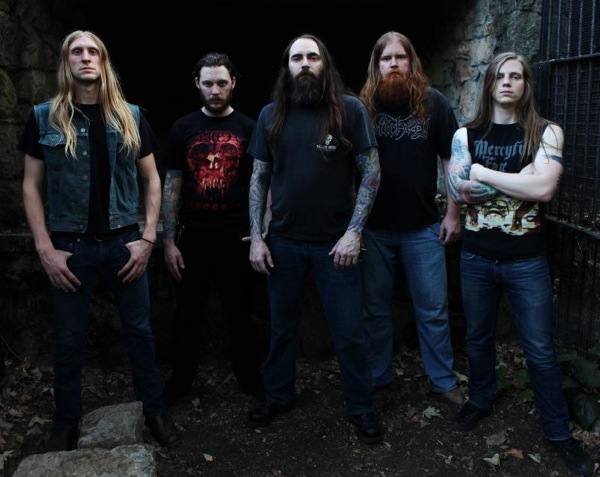 So you’ve jammed on it?

No, we have not actually played it but we’ve listened to it a lot and we’re always like, ‘You can do this part and I can do that.’

Basically Skeletonwitch will never officially record a cover, then.

You can never say never, but I don’t think we’ll put out a cover record. I can definitely say we will not do that (laughs). If we did a cover, it would have to be something special, a little out of the box but not like O.D.B. or something, even though we collectively kind of know a little bit of O.D.B., or Big Baby Jesus, if you will (laughs). But we’ll see what happens, man. We’ve got one in our heads, we’re not dying to do it but when the time is right, it might happen.