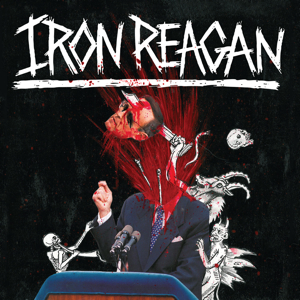 Even in their short two-year career span so far, Richmond VA crossover thrash/hardcore punk group Iron Reagan have transcended themselves far beyond being known as a side-project or supergroup of members from other bands such as Municipal Waste and Darkest Hour. On the 2013 full-length debut album ‘Worse Than Dead’ and a couple of other EP/split releases, Iron Reagan’s music has come across as concise and hard-hitting, and these qualities are all the more evident in their live performances which have made them one of the most devastating live acts to have surfaced in these last two years. The unstoppable Iron Reagan are now ready to release their second full-length ‘The Tyranny Of Will’ on September 16th via Relapse Records, and last week I spoke to vocalist Tony Foresta to discuss this 24-track, 30-minute rager and lots more. Enjoy the conversation below.

Tony, it’s great to have you again on Metal Assault. The new Iron Reagan album ‘The Tyranny Of Will’ is coming out very soon. With the insane amount of touring that you’ve been doing in the last couple of years it must have been good to sit down, take a break and focus on writing an album.

I wish that was the case! (laughs) That album was actually written all over the place. We weren’t really taking a break. When we actually sat down to record it, it was the first time we had a break to sit down. We wrote half of it on the eight-week tour we did with GWAR. We were writing riffs in the van and we actually had a recording setup inside the van. Once we were home, we would have just two-week breaks between tours, so we would come home, work on all the riffs and see what worked out in what songs. So we never really slowed down to actually do it until we had about a month off to record it.

Interesting, man. So, since you wrote a lot of it on that GWAR tour, the daily events of the tour, the shows, the other bands, the crowds and everything had some influence on the writing?

Yeah, a lot of it. Dave Brockie actually came up with a couple of the song concepts which we used in the final product which was pretty cool, like our little tribute to Dave. But even when we were done recording the album we had to hit the road straight after, and Phil had a pro-tools setup in the van where he was editing the album while we were driving through and touring with this band Occultist. We were literally editing the record on the road before we sent it to Kurt Ballou to mix it. It was crazy, man. I’ve never done a record like this, the kind of time and effort we put into it. Even though it was written all over the place, we worked on it non-stop.

I think you were able to capture the chaos of the whole process onto the album.

Yeah, it is kind of like that! There’s a lot of spontaneity on there.

I saw you on that Occultist tour and a couple of times before that, and you were playing some of these songs in those shows. Did playing them live first helped to get a feel of how the crowd reacts to them?

Yeah, it was kind of weird though. I don’t know why we did that, and we kind of learned a lesson on that. We were playing 3 or 4 songs off of the new album even on the GWAR tour, when we were just starting to write the album. We realized towards the end of the tour that we shouldn’t be playing songs that we haven’t released yet (laughs). These songs weren’t coming out for a long time and we were playing them last October! So, after that Occultist tour we were like, let’s just not play any songs that aren’t released yet. And then once this record started releasing singles like ‘Eyeball Gore’ and ‘Miserable Failure’, we started playing those songs. So we backed up a little bit and started playing shit that people would know. I think that gets a better crowd response. I remember watching this old Misfits VHS tape when ‘Earth AD’ first came out, which I think is their strongest material, and the whole crowd just stands there because nobody knows what the fuck they are playing (laughs). Everybody knows the Misfits’ other songs but as soon as they kick into the Earth AD stuff, everybody stops, and the band is like, ‘This is coming out in two months!’

Your album has 24 tracks in about 30 minutes. I interview a lot of bands that write long songs but obviously this is the other side of the spectrum. So, how does the writing process go? Do you actually write these songs of these durations or do you split material into smaller tracks?

I think the riffs are faster. Longer songs tend to be slower. A lot of doom bands that have 10-minute long songs are playing the riff slower, so it gets repetitive, it’s not annoying but it’s not as catchy. I think if you play a riff too many times it just gets old, no matter if you’re playing it fast or slow. Also, we suffer from A.D.D. pretty hard, almost everyone in the band (laughs), so we make music that comes across faster and more to the point. I get bored easily when I hear something played too many times. I think a lot of the youth is like that too. People just have shorter attention span nowadays. I don’t know if that’s a good or bad thing, but it’s our thing.

It’s like you relate to the audience in that sense because you suffer from the same thing, then.

I guess so, yeah (laughs). I write the kind of stuff I want to hear. I mean, don’t get me wrong, I do like some slower bands, but for us writing-wise I just get sick of hearing the same thing over and over again.

And with your lyrical themes you talk about daily life topics that most people think about, but the only difference is you get to express it. That itself must be satisfying, to be having this outlet.

Absolutely. It’s a good way to get stuff off your chest and get your point across in may be a different way than someone else may think of it. I like to throw humor in my lyrics even if it’s really dark. You’ve got to have a dark sense of humor sometimes, you know.

Right, and not only with Iron Reagan but with any of the other bands you’ve ever done, do you feel that you’ve been writing about similar things and just expressing them in different ways of words, or have you actually found newer topics over the years?

I definitely found newer topics. I think Iron Reagan and No Friends kind of have more of a similar lyric theme than Municipal Waste. Municipal Waste is more about humor, getting drunk and craziness. There’s also a lot of horror and ridiculousness in Waste lyrics, and sometimes I’ll throw some social commentary in there as well. But not as much with this band. Ryan our drummer helps me write some lyrics too, and Phil has written lyrics for a couple of songs as well. That sparks my creativity just in case I hit a brick wall, because they’re coming from a different perspective and that keeps us going. You’ve got to get a little help when you’re writing 24 songs an album (laughs). It’s good to have other creative people in the band that are good at doing that. Ryan writes a lot of political stuff, so I’d take his lyrics and mess them up a little bit.

That’s cool, man. I think whatever you’ve done with Iron Reagan so far, one thing the band has established is that it’s not a supergroup. That term has all kinds of negative connotations, but you’re a real band and that’s the biggest thing for you right now.

Yeah, it’s annoying being called a supergroup. It’s flattering too in a way, but as far as I look at it, we’re just going to do our band like we do every other band we’ve always done. We’re going to work hard and we’re not going to expect shit to be handed to us, because there have been a lot of supergroups who do get that. I don’t want that, I want to fucking work for everything I get. I think it’s clear that we have done that. We’ve been on the road for almost a year straight. When we’re home we’re writing, and we’re just really going for it. We’re passionate about it and we don’t want any fucking handouts. I even get mad when they say that it’s “members of” and all this shit. I just want people to hear it and be into it for the music. It definitely helps people sell records and shit like that, and I understand that. People who like some of my bands or Ryan’s bands or something, it helps them find us. But I’m just going to treat it like any other band and work my ass off, and hopefully people appreciate it for that.

And finally, after this album release what plans do you have? Are you going to get back on the road with your non-stop touring style?

Yeah (laughs). I’m actually leaving next week for South America with Municipal Waste and I’m very excited about that. It’s funny that I’m so busy with Iron Reagan and Municipal Waste is doing one-offs and little short things which makes it fun for everyone in Municipal Waste too and it’s making everybody excited about all these projects. It’s a really good time right now for everybody. So, after South America I’m coming home to take a couple of weeks off and then get back on the road with Iron Reagan for a month-long US tour. And I’m sure there will be stuff coming after that!