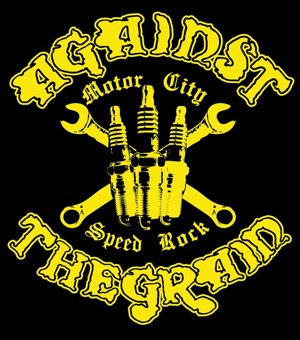 Based out of Detroit, Michigan, rock n’ roll quartet Against The Grain truly embody the Motor City spirit in their music and attitude, as was clearly prevalent on their debut album, simply titled ‘Motor City Speed Rock’. The follow-up album ‘Surrounded By Snakes’, deemed by Metal Assault as one of the best releases of 2013, saw an expansion in the band’s musicianship and they underwent a natural progression in their songwriting abilities. Motor City Speed Rock has been re-released as a 10″ by Self-Destructo Records this month, and the band is gearing up for a run of US dates. On their previous big US tour with Church Of Misery and Zoroaster, guitarist/vocalist Kyle David and drummer Rob Nowak caught up with Metal Assault at the Satellite in Los Angeles to talk about all things Against The Grain. Enjoy the chat below.

Great to have you here. How are you guys doing today?

Kyle – Good! We had a pretty decent on the way here. Tempe to Albuquerque was pretty rough and we had to go through mountains the whole time, with snow and shit.

Wow, I’m glad you’re past the snow and in LA now. You won’t see any snow here at all. But coming to your new album ‘Surrounded By Snakes’, you released it a few months ago, and as compared to what you’ve done before, you’ve shown that you can slow down and still make good music. Do you agree with that?

Kyle – Yes, definitely. Our songwriting has matured a lot, and instead of just blasting through a song we try to get a feel for the whole thing as well. Slowing it down has become a popular thing in heavy music nowadays with bands like Church Of Misery and Zoroaster for example. Their stuff is doing well. So yeah, it’s cool.

Rob – We took a lot more of our influences into account. With our old album, we just came through as a speed rock band. It was king of like Zeke’s speed dealer worship. But with one we kind of took into account the fact that we’re all big rock n’ roll fans. We’re fans of stoner metal and punk rock too, and we kind of forged our own sound now. We definitely found our comfort zone with this new album.

So, what exact influences have you tapped into for this particular album?

Rob – For this, I would throw Motörhead, Black Sabbath and Thin Lizzy into a blender, with a little bit of punk rock.

Listen to Surrounded By Snakes in its entirety here:

You guys are from Detroit i.e. Motor City, and you call yourself Motor City Speed Rock, which was the name of your previous album as well. What exactly does that mean to people who’re not familiar with Detroit. What attitude does it bring into your music?

Kyle – Well, we’ve been called speed punk, speed metal and all that. We’re not really straight-up punk or metal, but we’re rock, and we’re fast too. So we just call it Motor City Speed Rock and it’s a lot easier to represent your city if it’s in the album’s name or in the logo.

Rob – Yeah, there’s two accounts into that. Detroit has a history of music, and when we toured, people knew that we’re from Detroit, because of MC5, Nugent, Cooper, Iggy Pop, just all that history of rock n’ roll that’s come out of Detroit. We feel like it definitely came with us. And also, there’s a couple other bands named Against The Grain, so people could find us more easily if we branded it Motor City. If you type in Against The Grain and Motor City, you can easily find us on the internet.

Yeah you’re right. People have to include either Motor City, Detroit or Michigan along with your band’s name to find you on a web search.

Exactly, man. So, this Church Of Misery tour must have been a good one for you, right? As you said, slow heavy music is popular these days and you have that element in your new music as well, so it’s a great fit.

Kyle – Oh yeah, it’s a very good fit. It’s been great with Church Of Misery. Usually we tour on our own and we’ve done some tours mainly with punk bands, but this is our first one with a heavy metal band, and the crowds have been very, very receptive. It’s pretty cool. It’s a different scene and the only way we’re going to get big is to branch out to other scenes. We even met some thrashers last night in Tempe, and they totally dug us. So we’re going to just branch out to every little sub-genre of rock n’ roll.

Rob – We want to just be a part of everything that’s rock n’ roll because that’s what our music has really embodied. Even from the beginning, we didn’t say we were a punk rock band or anything like that. Like Motörhead always say, we’re a rock n’ roll band. It shouldn’t be divided into sub-genres. It should all be rock n’ roll.

Rob – A lot of it is. Some of it kind of drifts away from that, and we don’t play that. We play a form of metal that’s embodied by rock n’ roll. 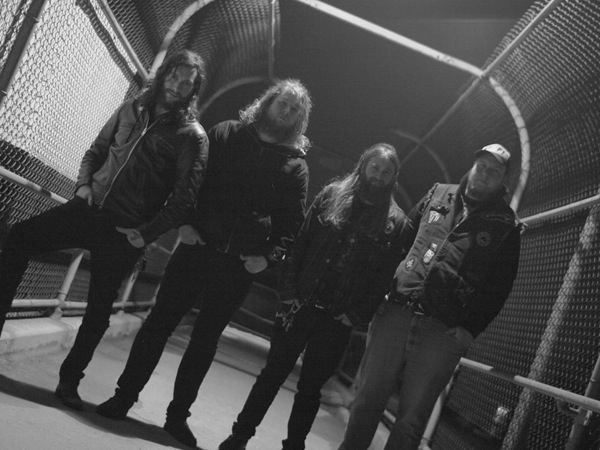 Right, well I was reading your facebook page and you’ve listed the bands you’ve shared the stage with. Valient Thorr is one of those bands. I love that band. It must have been a perfect show for you, I imagine.

Rob – Oh yeah, Valient Thorr was great. We shared the stage a couple of times with Zeke and that went over really well too, definitely.

Kyle – The first time I saw Valient Thorr, they were the odd one out on some Warped Tour lineup, years and years ago (laughs). But when I saw them playing, I was like, ‘This is rock n’ roll!’ It was in Detroit too and they were talking about Motor City, MC5 and stuff, and I knew that those cats were cool, judging by them just talking about that kind of stuff. And then a couple of years later we got to play with them, so that was a pretty cool deal.

Rob – Valient Himself actually said on stage after we were done playing that Against The Grain is what Motor City rock n’ roll should sound like. So that was a huge compliment. We can’t really escape the Detroit feel, which is cool to us. We don’t want to deny it.

As you said, they always have been the odd band out when they open for other bands. What do you guys think about being in a similar situation when you are an opening act?

Kyle – Oh yeah, even on this tour we’re sort of like the odd band out, but we still play and give it a 110 per cent every night. The crowds have been receptive to it and both the bands that are with us are awesome. Sometimes it’s better to be the odd band out because you stick out more.

Rob – A lot of my favorite bands were like that at first, until they forged their own scene. It’s better to do that than to jump aboard a cookie-cutter scene and be a part of that, because when that fizzes out, you’re gone. Not to say that we’re 1000 per cent original by any means, but it’s kind of cool to be the odd one out sometimes, definitely. It doesn’t intimidate or scare us. We kind of enjoy it when we’re offered a show. We just played with Saint Vitus back home, and they’re full-out stoner metal. We love them and their crowd loved us. It’s still from the same heart and we all probably listen to a lot of the same bands.

So, the Motor City Speed Rock album is being re-released by Self-Destructo Records, I believe?

Rob – Yeah, we’re re-releasing Motor City Speed Rock on 10″ because we pressed 2000 copies of the CD, sold out of those and never had a vinyl for it. A lot of people have been asking for this on record, so we’re excited to release it. We’re also doing a 7-inch. We plan on releasing a lot of stuff in 2014.

Listen to Motor City Speed Rock in its entirety here:

What are your plans for the near future?

Rob – We’ve already been working on three more tours and a lot of independent stuff. We try to do 150-200 shows a year. We just got signed to Atomic Music Group and they do Nashville Pussy, Supersuckers, Zeke, DOA, Guttermouth and they do a wide range of stuff. We’re hoping to go out with some of those bands and just do it, 200 days at least (laughs).

Talking of Detroit, is there a local scene there that could benefit bands that start out, or is it all about breaking out of there?

Rob – There’s two aspects to that. Number one, Detroit has a huge supportive scene. When we play a show, it’s well-promoted and the rooms are packed. There’s a lot of other good bands as well. But also, because the economy is bad, it pushes bands to want to go play more places. There’s been tons of touring bands coming out of Detroit, from punk rock to whatever else. You have The Coffin Cats, The Suicide Machines, The Swellers, just all kinds of different scenes of music touring non-stop out of there.