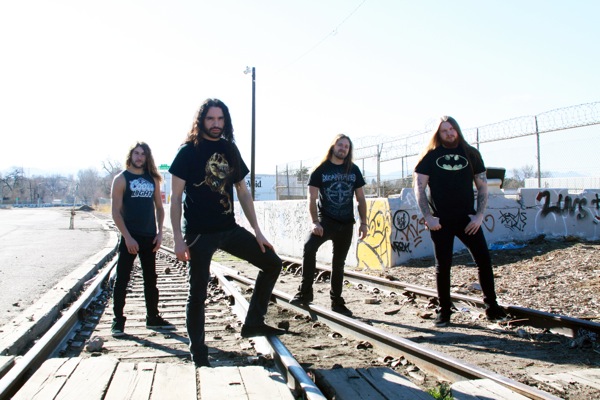 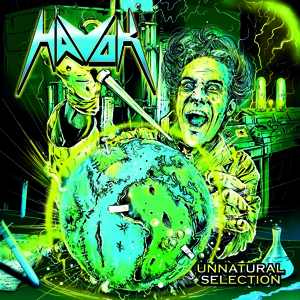 Denver, Colorado thrashers Havok started out in 2004 but in the last few years they’ve been going at it full tilt with some solid full-length and EP releases, and great tours to support them. Their latest full-length offering ‘Unnatural Selection’ came out earlier this year via Candlelight Records and is an unrelenting, unabated salute to old-school thrash. Following the album’s release they did a North American headline tour of their own, and then jumped on a tour with Soulfly. They visited the Viper Room in Hollywood on the last night of this tour on November 7th, and before the show I caught up with guitarist/vocalist David Sanchez to talk about all things Havok. Read the conversation below and check out some of their new music.

How are you doing today and how has everything gone for you on this tour, man?

Today is the last day of tour, we are stoked and it’s going to be a sardine can in there with bodies on bodies. The tour has been going great so far!

You were here just two months ago and played a headline show down the street at the Whisky, and you jumped on this one straight after. Were you concerned at all that it was going to be too soon to do another tour? It’s a different audience though.

Oh yeah, it’s a totally different audience, so that kind of kept all of our worries at bay. If it was going to be another headline run, then yes we all would have been like, ‘What are we doing?’

Exactly. But this is a weird setting here. It’s a very small room. Have you played here before, ever?

Never at the Viper Room. Tonight should be totally packed and insane.

It should be! But the tour you did previously was your first ever US headline run, I believe? And you packed out the Whisky. That was a great night, and a great tour for you guys.

Yeah, that tour went really well. It was actually a little better than expected, and it was just us on the tour which was pretty cool because we got to play with only locals every day. It was two months long, and we did basically everywhere in the US, all four corners.

You have enough material for headline shows too now, with the new album making it three full-length albums in your arsenal. That must have also been a main reason to go out on a headline run after this album rather than in the past.

Right, yeah! On the headline run we played for about an hour every night. It was fun and grueling. I think we only had a couple of days off in the whole two months. So we had to put in some hard work but it turned out alright!

It sure did. So, with thrash bands there’s a certain expectation from the fans in terms of them expecting a certain kind of a sound, which obviously is just straight-up thrash. As a musician, have you ever felt limited being in this band and doing this kind of music?

No, not really because we sneak it enough of our other influences to keep it interesting. Like we throw in a lot of funk influences, we have a lot of slap bass and every once in a while there’s some jazzy and funky weird things in there. But definitely the next album will extend our horizons a little more.

So I guess you’re able to throw in that kind of stuff without people realizing it because all they hear on the surface is thrash.

Yeah, absolutely. For instance, in the middle of the song ‘D.O.A.’ there’s a syncopated part where everyone’s in unison. That part was straight-up influenced by George Benson’s jazz music. People just don’t realize that because we are a metal band, but there’s a lot of other styles that sneak their way into their music.

In terms of your guitar playing, what have you done on this album that may be you were not able to do in the past?

On this album, I think we were able to make a conscious effort to slow down a little bit and make the music breathe a little more. I think the songwriting was well-focused and I know this is not in regards to the guitar playing but I think lyrically this new album is the strongest that we’ve had so far.

Interesting, man. And in terms of your gear setup, did you bring anything new for the album in particular or the tours after? 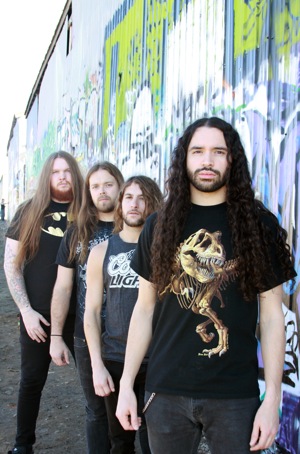 Another thing about the album is, the production is very balanced. You can actually hear everything. That’s not usually the case with thrash albums and there’s too much focus on may be one part or two parts. Was that important for you as well?

Yeah absolutely, everyone is doing their own unique part in music. Quite often, our bass lines are not just mirroring the guitars like they do in metal so much. It’s nice when you can actually dissect the mix and actually hear the bass versus the guitars, and it’s not just one meaty mess of riffs. It’s cool that you can pick out other instruments. That’s the point.

With your vocals as well, I think you’ve developed from the past. If I have to compare it with another vocalist, I would say you have a kind of thing going on which is similar to Mark Osegueda from Death Angel. Do you think you’ve grown as a vocalist as well?

Yeah I think vocals are always getting a little more experimental, and on the next album we plan on bringing more melody and hooks into the music, but not in a pussy way. Like we’re not going to start doing whiny choruses or anything like that. But all the great bands have melody in their vocals, like Metallica, Megadeth, Anthrax, and Testament.

The guys in those bands are singing more than people realize, specially with Chuck Billy.

Oh yeah, there’s a lot more melody in their singing than people realize. Chuck Billy is one of my favorite singers. But vocals are normally the last thing we worry about, because I’m a musician and we’re all musicians. So music gets worked out first but vocally I just like to scream my head off. I like to yell. It’s fun to be loud (laughs).

You have toured with a lot of these senior thrash bands. Have you taken any influence while being on the road with them, at all? Do you learn or get inspired by seeing them every night?

Inspired, absolutely. It’s really cool that we’ve gotten a chance to tour with bands like Sepultura, Soulfly and Death Angel and played shows with Testament, Anthrax and all kinds of stuff. That’s really, really awesome and it’s always inspiring to see a band that’s great live. It just reminds me of why I started doing this. Actually, we’re going to high-tail it home after tonight’s show because tomorrow Overkill and Kreator are playing in Denver. So that’s going to be a lot of fun.

Wow, it’ll be a mission to get back there in time for the show.

Yeah, 16-hour drive. But it’s nothing. We can do it. I’ve done that drive before by myself!

As long as your van is perfectly working, right?

Yeah, as long as the van doesn’t take a shit, we’ll be alright. Knock on wood (laughs).

Right, so you’ve been on this long touring run on your own and then with Soulfly. After this, what’s the plan?

We’re going to have a couple of weeks off and then we go to Europe. After that we’ll have a few weeks off and go to Asia for the first time, and Australia, I think. Then I think we’ll travel to more continents, may be south of the equator.