Hailing from Melbourne, Australia, Twelve Foot Ninja is an incredibly eclectic hard rock band that blends a plethora of musical styles ranging from modern prog to jazz, latin, reggae and 90s rock. They formed in 2008 and following two EP releases they put out their full-length debut album ‘Silent Machine’ last year through Volkanik Music. This album is was released physically in the US with a couple of bonus tracks on October 15, and currently the band is on a North American tour with Periphery, Born Of Osiris and fellow Australian band Dead Letter Circus. I saw this lineup play at the Roxy on October 24th and was absolutely blown away by Twelve Foot Ninja’s performance, so much so that I thought they were the best band of the night and the weirdest band I’ve seen in a long time. I contacted them immediately to ask for an interview. Sure enough, a week later I got a chance to speak to guitarist and producer Steve MacKay about the visa problems the band faced in the initial part of the tour, their musical style, live shows, and more. Enjoy the conversation below, with a couple of music videos.

It’s good to have you on Metal Assault, man. I know that you guys had some problems getting into the country but now that you’re here, is everything going alright?

Everything has been awesome so far. It’s such a relief to finally get in and play some shows. It’s been great!

What was it like in the first couple of weeks when you were not able to get in? What did you end up doing for that time?

We were in Frankfurt, Germany, I think it was like nine days or something. Yeah, we started to go a bit crazy. We were staying at a hotel, basically just eating pretzels and going for runs along the river, doing shit like that (laughs), and then we stayed at a friend of Periphery manager’s house. She had a couple of little kids and we were just playing dinosaurs and hanging out. It was fun but I think we were really just trying to suppress the fact that we were not in America playing the shows. But when we finally got our passports, it was like a celebration. We were pretty stoked! 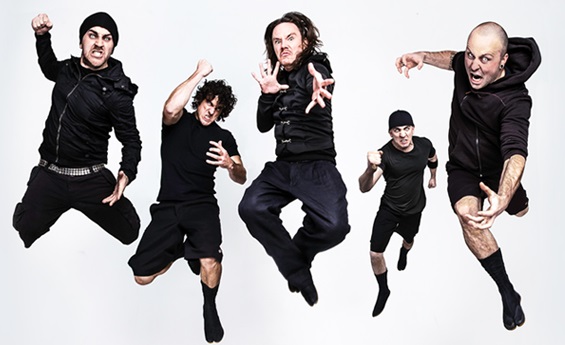 Yeah, I can imagine. The first show that you did make it for was in LA and I was at that show. I believe you guys had just barely made it that day. Were you feeling jet-lagged?

Oh yeah. Personally I felt kind of completely out of it. We were just running on the excitement of being there. We just got the flight from Germany and went straight to the venue, set up and that was pretty much it. But yeah, it was a lot of fun. It was such an awesome way to start the tour, playing at the Roxy. It’s got such history there. It was awesome.

You guys played a really good show there and I think you made a lot of new fans too. Is this your first ever tour in America?

That was our very first show in America, the one you went to. So yeah, it was great to get that reception.

You put out your debut album ‘Silent Machine’ last year and it’s now been re-released with bonus tracks, right?

Yeah, it came out while we were starting this tour. It’s exciting because it’s available in the States as its physical version so people can get their hands on it, which is always good. The bonus tracks are acoustic arrangements of existing songs, I think there’s one song off one of our EPs which the other guitarist put together, but yeah it’s just a different kind of flavor of the music, I guess. We are actually working on new material right now in the bus, so hopefully we can get something out sooner than later.

So, are you able to actually write songs while on tour?

Well, we’ve got this massive coach and in the front half we’ve put together a little portable studio. We’re just throwing ideas around and consolidating existing ideas, trying to just keep the ball rolling. We are pretty lucky to be able to have the opportunity to have a bus, so we thought we should make the most of it and try and be productive at the same time.

Judging by your show in LA, I thought your music came across as a very eclectic mix of styles. How did you actually come up with that?

I think personally I’ve always written songs that have jumped different genres. It’s been a thing I like to do, and the band members just came together on the same page and evolved the idea further. We tried to make sections more cohesive, make blends more interesting and I guess it’s just a collective vibe that we all come to the table with. We sort of created our own language in order to come up with tracks that don’t particularly follow one style, if that makes sense.

When you’re playing live, how do you handle switching from one style to the next? Is it a challenge at all or are you used to it by now?

Well, I think we’re pretty used to it now. When you create something, you often become a bit immune to what it is and you have to sort of experience it through other people. For those people who haven’t heard us, they kind of get tripped out when we go from latin to funk to metal or whatever, but to us it just feels normal.

On stage, when you switch from a latin or reggae part to a heavy prog sound, do you achieve that by doing any pedal or gear shifts?

For this tour I’ve been using a Line 6 Pod HD 500 and a JTV-89-US Variax guitar, so what I’m actually doing is I’ve created all my guitars on the computer, and I’m changing the tunings on the guitar with my feet on the pod. So I’m basically changing the guitar, the pickups, the tunings, the pre-amp sound, the cabinet simulator and effects all with the feet. So that way when you’ve got control over it you can really create quite a drastic shift in feel. A lot of what I do is physically impossible in terms of the gear, with all the tunings. But this is a cool way of doing it, definitely.

That’s interesting. This tour is still ongoing but after this what plans do you guys have?

At the moment even as we’re touring, we’re simultaneously working with our special effects guy on a new film clip. So he’s sending over clips to us and we’re kind of collaborating on that. We hope to release a clip, release more material and just do a lot more touring. With the US trip and the stuff that we did in Europe, we’re not going to leave it for a long time before we return. We’re going to try and get back pretty quickly, to sort of build on what we’re creating over here. So yeah, we’re working on all of these things simultaneously, the clip, new material and touring.

That sounds great. I think that’s all I have for this interview. It was good talking to you, Steve, and I really enjoyed your band the other night at the Roxy. I thought you were the best band of the night, to be honest with you.

Thank you very much, I really appreciate it!