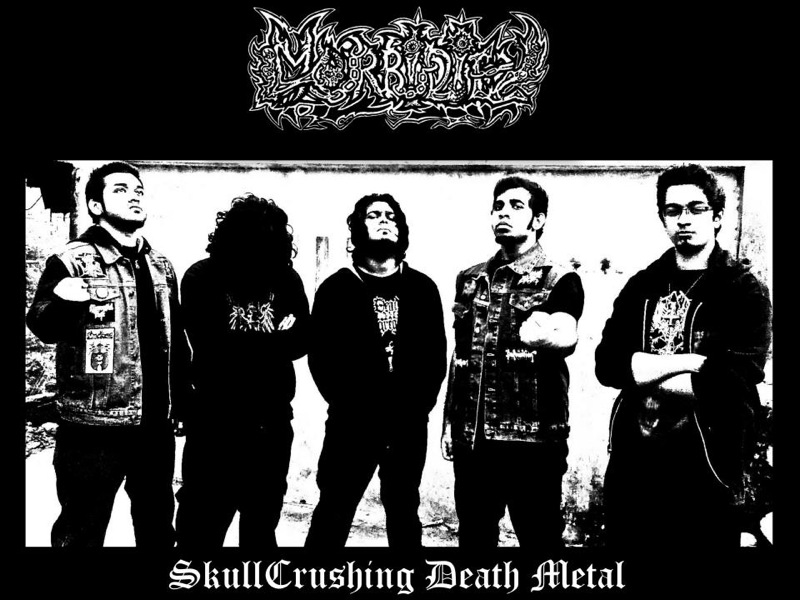 Morbidity are a death metal quintet hailing from Dhaka, Bangladesh and have been around for a couple of years now, spreading their message of occultism through the music on their 2012 demo ‘Pits Of Eternal Torment’ and skullcrushing live performances. Earlier this year, they re-released the demo as a split album called ‘Impious Conjuration’ with the band Exorcised. Now they are preparing to partake in the upcoming ‘Banish The Posers’ Fest in their hometown on November 16th. A gig put together by local promoters Primitive Invocation, it promises to bring together the best of Bangladeshi underground extreme metal with bands from Malaysia, Thailand and India. A few days ago, I caught up with the band to talk about this fest, and just about everything else concerning the band at this point. Read the conversation below, along with a taste of their music. If you’re in Dhaka, make sure you catch Nafarmaan at the gig next month. And for extreme metal fans elsewhere, Morbidity is worth checking out.

First of all, you’ll be taking part in a big local show in your hometown of Dhaka on November 16th, the ‘Banish The Posers’ Fest. What are your expectations from the gig and how are your preparations going?

Well, if a gig has a line-up like that of BTPF, one would to be an idiot to not have high expectations from it (laughs). As far as preparation goes for the gig, we’ve started with our practice sessions and intend on giving our best in BTPF.

This festival has four bands from Bangladesh, along with bands from Malaysia, Thailand and India. Would you say it’s the biggest gathering of local and international metal bands Bangladesh has ever had?

Yeah, considering we only had one band from another country playing here in the previous gigs (laughs). Jokes apart though, this is indeed the biggest gathering of bands in Bangladesh in terms of both quality and quantity.

You started out three years ago and have released a demo and split EP with the band Exorcised. Are you satisfied with your journey so far as a band?

It’s too early to even have that thought in mind, there’s no question of being satisfied with just a demo and a split, ask me that in 10 years and I’ll think about giving an answer.

All five members of the band have formerly played in other bands. Do you think you’ve brought together musical elements from those past bands, or has Morbidity been like a completely new start for all of you?

Morbidity is a complete new start for me personally, you see there is a reason why these bands are in the past and thus not in the best interests of Morbidity to bring in anything from them and to just completely bury them.

Tell me more about this split EP with Exorcised called ‘Impious Conjuration’ which you released earlier this year. How did you hook up with those guys?

I knew Željko Lučić through facebook, he is a great guy. We both have a similer taste for death metal, so we thought we should re-release both of our first demos in a split format. I knew Pech from Unholy domain records too and he is a great supporter of both the bands and agreed to release the tape from his label.

This EP was put out on Italian label Unholy Domain Records and I believe you’re currently signed to a British underground label called Me Saco Un Ojo Records. What was your reaction when you found out that these people have discovered your music and are interested in releasing it on their label?

It was indeed a good feeling to find out that there are people out there who like the brand of metal you play and an even better feeling when they want to spread your creation to other such people. Being famous was never a goal for Morbidity, however we do intend on letting a certain group of people know we exist.

Coming back to ‘Banish The Posers’ Fest, it’s an all-extreme metal lineup. In what way do you think you will stand out and be noticed amongst the seven other bands that are playing a similar style of music as yours?

If it’s a question about standing out and that too in a gig like BTPF, the only thing we can do is play death metal, the way we always do. You see, Morbidity is unique in each and every way from other bands. Skullcrushing death metal this is what our sound offers.

You’ve listed quite a number of bands as influences on your facebook page. Can you point out some of the bands and/or albums that have been the biggest inspiration to you, albums that were basically responsible for the creation of your band?

There are a lot of bands to name but mostly we follow the late 80’s and early 90’s swedish death era, of course in our own style. Grave – Into The Grave, Carnage – Dark Recollection, Entombed – Left Hand Path, God Macabre – The Winterlong, etc are some of the bands that we really worship.

If you had to pick one band that you would love to see live in concert, which one would you pick?

It would totally be unfair to pick only one band as I have a huge wish list (laughs). Still, Motörhead would be my first priority.

Aside from ‘Banish The Posers’ Fest, what else do you have coming up in the near future?

We do have a few gigs lined up and if everything goes well, we’ll let you know through our facebook page, so keep an eye over there and we are finally done with the recording so the wait begins for the release of the full-length, keep an eye out for that as well, cheers.