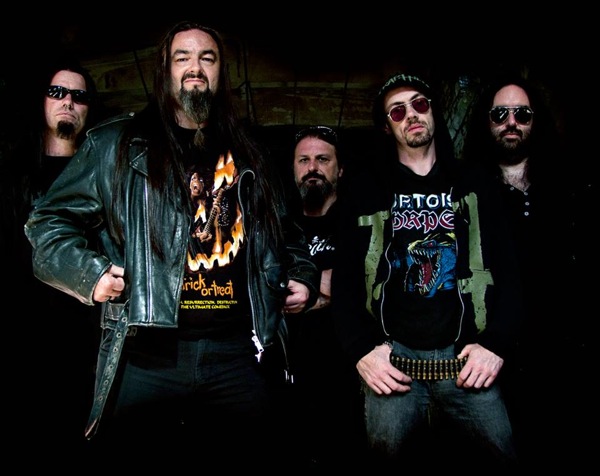 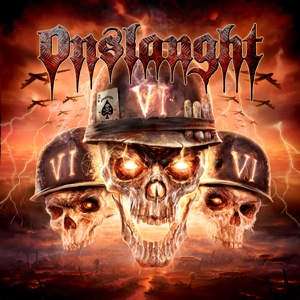 British thrash metal band Onslaught began 30 years ago in 1983, and went through a long period of inactivity from 1991 to 2004 but then they made their comeback and with albums like ‘Killing Peace’ (2007) and ‘The Sounds Of Violence’ (2011), they’ve become stronger than ever. As of now, they have just released their sixth studio album simply titled ‘VI’ via AFM Records and have just begun the ‘Slaughterfest 2013’ European tour with Exhumer, Master and M-Pire Of Evil. Last month, I had the chance to talk in detail with guitarist Nige Rockett about the new album, touring, gear and other things. Check out the conversation below, along with a couple of tunes from the new album.

Nige, it’s great to have you on Metal Assault again. Your new album VI is out now in America and to put it in simple words, it’s very aggressive thrash album, which is pretty much what the fans want from you. Would you put it up there with any other Onslaught album in terms of the aggressive quality of it?

Personally, I think it’s the strongest album we’ve ever made. The reviews so far have been absolutely amazing. It has nicely backed up what we were thinking ourselves, you know. I guess every band is going to say that their new album is the best, but we genuinely feel this time around that we’ve actually achieved exactly that. It’s what we set out to do, to make a very aggressive technical thrash album, and we’re very happy with the results!

This aggression in thrash music has always been associated with a youthful attitude. You guys are obviously not teenagers anymore, so where does that inspiration come from, that you’re still able to make this kind of an album? 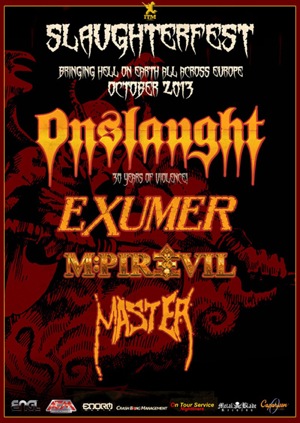 Right. And as a guitarist, what have you done on this album to keep it fresh and keep it in essence with what you’ve done in the past albums?

We’ve tried to push ourselves a lot more. It’s a more technical album. We’ve really tried to push the boundaries of everything we do, the drums, the guitars, the vocals, and it was some tough stuff to play, specially when you’re laying down four or five tracks of the same guitar to get it really right. There’s some intricate stuff going on, and we’ve used a lot of layers this time as well which gives a lot more depth to the sound compared to past albums. We did experiment a little bit more, but it’s obviously still got all the Onslaught traits in there. We just tried to go a little bit more expansive with the music.

What gear setup did you use for this album?

I was quite surprised when we did this album, actually, because I endorse Engl amps which I use live all the time but we used two different amps for this album. We used an Engl Fireball which had been modified, and it sounded great and added a lot of clarity to the sound. Surprisingly, I used a dual rectifier which to be honest I never really got on with, specially live. But this Mesa was absolutely amazing, it was really modded up a lot, and it was so aggressive I really couldn’t believe it. It was absolutely incredible, the best Mesa I’ve ever heard. And I think we used two Engl standard 4X12s. We had two microphones on each one, just mixing the Mesa and the Engl together and it sounded fantastic. It really fit our sound but at the same time had a lot of clarity. I was quite surprised.

Would you be using the same thing on stage?

I use quite a different setup when we play live, because we do a lot of flying to shows. I’m fortunately endorsed by Line 6 as well, so what we tend to do is we use the Line 6 POD X3 Pros because you can actually put them in our hand luggage and basically when you get to a show in another country, you just add your effects to the amp, do a little bit of tweaking, and you’ve virtually got your sound straightaway. They’re really useful bits of gear. When we do go out on a tour bus or in a van with a trailer and stuff, I take the PODs and use that with the 100 Watt Engl Power amp and cabinets. It sounds absolutely amazing.

So, as a band’s career moves on, the comparisons keep coming up with past albums. For a band like yours which has been around for a while, do you think that’s the biggest challenge when you write new music, to keep up with what you’ve done in the past, better it and live up to the expectations?

Definitely for me. That’s how it works for me on a personal level. I would be very disappointed if we released anything that was sub-standard to the previous album. I think that’s the time when you’ve got to start looking at yourself and saying, ‘Can we continue this any longer?’ I think you’ve got to stay one step ahead of the game with your own music. I don’t know how I would feel if we come to write the next album and it’s not as good as ‘VI’, whether I would want to put it out or not. I would kind of feel I’ve let myself and the fans down. So it’s tough. It obviously puts a lot of pressure on you when you’re writing the next record, and so far I think we’ve managed to step up each time. We shall see what happens next time around, I guess!

So you’re able to be honest about your own assessment of an album after you put it out.

Yeah, I think you’ve got to be, as a songwriter and musician. If you can’t be honest with yourself and realize that the album is not good enough and you look at everything with blind eyes and you think it’s the best thing you’ve ever done but it’s truly not, then you’ve obviously got a problem. When Andy and I write together, I think we’re both honest with each other to say it if something is not good enough. And we throw that part away. We never write any songs that don’t get used. You read about a lot of bands writing 15 songs for an album and using 12. What’s the point? If those three songs weren’t good enough, why did you write them? That’s the way we look at things. So, it may take a little more time when you’re carefully going through everything but at the end of the day everything comes out better, you know.

With that said, I think this album came through pretty quickly.

Yeah, the last one came out in 2011. Andy and I have been writing together for about five or six years, and we’ve kind of found a system that works well for us. We get so many ideas coming through and this album was really an easy one to make for us. Every session we were writing, we had so much coming to the table, it was fantastic. Obviously the label put a bit of pressure on us to do things quickly because there was such a big gap between Killing Peace and Sounds Of Violence, they didn’t want that whole ordeal again. We needed to keep the momentum going with new music. So yeah, they put some pressure on us and we kind of stepped up to it.

When you started out in ’83, at the time a lot of British heavy metal bands were starting out too, and quite a few of them were influenced by punk. Do you think that attitude and some of that style will always be prevalent in Onslaught’s music?

Oh yeah, definitely. I’ve always still maintained that attitude in my personal life. I think you can still hear it in places in Onslaught’s music. It’s the music I love, and the second generation of hardcore punk bands had a kind of metallic edge to them anyway. It gives a little bit of uniqueness to our sound, a bit of a punky edge for sure.

Talking of touring, what do you have planned for this album? I think you’d be just beginning your European tour at the time of publishing this interview.

Yeah, we just came back from Russia recently. It was our first time, and it was very interesting. Then as you said, we’ll be off to Europe to tour the album and promote it properly. South America follows that, and then we’re looking at North America for April-May next year.

You did a North American tour sometime last year, and unfortunately I had to miss out on that because I wasn’t in the country at the time. How was that?

It was fantastic! It was our first tour there after all this time, and on the whole it went great. The journeys and drives were obviously long, but it was really well-planned and I think we did a lot of good for ourselves over there.

The last question I have for you is about the UK scene. I’ve spoken to a lot of British bands and musicians recently, Jeff Walker from Carcass being one of them. He was telling me that people in the UK aren’t really supporting their own bands as much anymore. Do you feel that as well?

I’ll have to echo with his thoughts and what he said. Very much so. The UK has always been the same. I really never got this country, to be honest. I mean, there’s always been a lot of metal bands here. As soon as the American bands come to town, everybody comes out. But if a British band’s playing or a German band comes over, it’s just laziness. It’s really weird, and the UK press are the same, very very unhelpful to British bands. They always have been. It’s something I don’t really get. It’s very bizarre.

It’s kind of similar in the US as well, I think. People are generally more excited to see touring bands rather than the American bands.

(Laughs) Right, it doesn’t make sense to me. But we obviously still play England because it’s our home country and we do pull good crowds but we just don’t get the support from the media. So we do what we have to do here, and the rest of the world is far more accepting to us, so obviously that’s where we go. All the bands who come to London generally do well because it’s our capital city, but once you go outside of that area it gets a little tough. It’s always been the same for the last 30 years and I don’t see it changing either. It probably gets worse if anything.