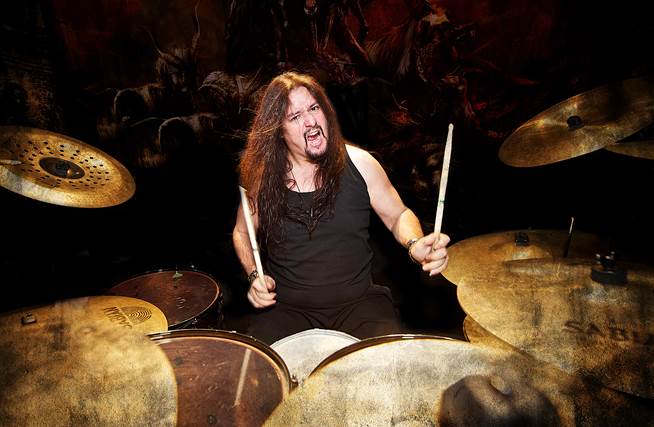 Perhaps the most prolific drummer in heavy metal today, Gene Hoglan needs no introduction to metalheads, thanks to his exploits in a long list of bands including Testament, Fear Factory, Dethklok, Dark Angel, Death, Meldrum, Strapping Young Lad and many others. Even though Testament is currently a highly active touring band and Hoglan continues to take the drumkit for them, while he is off Testament duty he is on a run of solo clinic/performance dates titled ‘The Gene Hoglan Experience’, and has announced ‘The Atomic Clock: The Clock Strikes Two’ DVD, a sequel to the Atomic Clock which was released in 2010. Yesterday on September 26 2013, I had a chat with him about the solo tour, the DVD and other things. Check out the conversation below, and LA folks should come and see his show at the Whisky on Tuesday October 1st.

Gene, it’s good to have you again on Metal Assault. Before I get into anything else, I want to first ask you about the recent show that you did in San Bernardino for Testament. What was that experience like? It was such a special event with all those bands playing, and you got to participate in it.

That was a great show! It was excellent. It was exactly like one of the European festivals that we play, except it was in California. What a great bill! It was really awesome for the fans and I think that place had probably not seen that many people in quite some time. Just overall, it was a wonderful experience. I’m glad I was there and everybody had a really killer day. I hope the fans enjoyed it, they seemed to really dig it, and I hope they do it again and I get to involved in something like that again. It would be really cool.

It was probably nothing new for you, because you do that in Europe and other parts of the world outside America on a regular basis. But as you said, for people in LA it was new because we don’t get those kinds of festivals at all.

Exactly, and that’s why I think it was really special. Not trying to sound like a jaded guy who goes to and plays festivals all the time, but I do understand the exclusiveness of it, and the specialness of it for a bill like that to happen in Southern California. When was the last cool bill like that? May be the Big Four or something, two or three years ago. For this show we had six or seven really cool bands and to have Iron Maiden top the night off, how cool is that for the fans?

It was indeed amazing! So, coming to your ‘Gene Hoglan experience’ stuff that you’ve been doing, I think you’ve done one show so far in Calgary. What was that like and people who’re going to see the shows in the coming few days, what can they expect from this event?

A whole lot of fun! That’s one thing I try to bring, a real sense of fun and this thing kind of borders on stand-up comedy for me, because everything I do is completely ad-lib. Footage from that Calgary show has made it on the internet, I don’t know how much, but I’ve only seen the concert portion of it with me actually playing. But everything is a completely different night. It is an individualistic night, and it’s so interactive that fans are free to ask any kind of questions. I don’t have a time limit on the Q&A section or anything like that. You can ask me about anything. If you want to keep it about myself or some of the bands I’ve played with or some of the people I’ve worked with, that’s cool. Even if I miss out some people who have their hands up during the session, they can always come up to me with their questions afterwards. So it is a lot of fun, every night is its own experience, and no two nights will be the same on this. At times I’d probably end up telling the same story here and there if somebody asks, but I do have a wealth of information and entertainment inside my head and I just want to get that out. It’s a very light-hearted night, you know. Plus, I play drums! I play to a bunch of different tracks that a lot of people enjoy and I talk in between them. It’s kind of spoken word/gig, a one-man gig where the tracks are booming and I’m playing along with them. It’s a really special night and I hope everybody that comes out enjoys it and I guarantee you will. There’s not going to be a frown on any face at the end of the night. I’ve done lots of these shows but it’s only now that we’re calling it ‘the Gene Hoglan experience’. Nobody has been disappointed and everybody has been leaving with big ol’ smiles on their faces, and that’s really cool to me.

Right, so there’s no planned set list or schedule for these shows, then? It’s just all free form and wherever it takes you.

Absolutely. I do have a pre-planned idea for a night but that doesn’t mean I’m going to be marrying to it. If somebody shouts out, ‘Hey man! Can you play this song?’ If I’ve got the backing track, hell yeah! I’ve done that sometimes. I’ve got a lot of tracks but at times I don’t have what they ask for. So then somebody else yells out, ‘I’ve got a copy of it in my car!’ I’m like, ‘Well hey bring up the CD and I’ll try playing along to it!’ Off the top of my head, that’s the way the whole night goes. It’s very interactive, so that’s one thing that I really appreciate about it. You don’t get shout-out request nights when your favorite bands are playing and you don’t get to ask questions as they are on stage. So this is something that’s very different and I’m trying to make it open and accessible to everyone. This is not just about drums. It’s inclusive for everybody. It’s not just a night of drum talk or isn’t a drum clinic. This is me getting on stage and playing some songs. Am I going to talk about the drum parts in those songs? Well, if the fans are interested in that, then cool. When I’ve done these kinds of things in the past, I’ve asked how many drummers I’ve got in the crowd and it’s usually never more than a third of the audience. So, it is inclusive for metal fans, drum fans, Gene fans and fans of any of my bands. Or, you don’t even have to be a metalhead. If you want to come out and be entertained, this is going to be an entertaining night. So there you go!

You’re also putting out a new DVD which is a sequel to the Atomic Clock. This time what have you done that you didn’t do on the first one?

Well, I managed to get licenses to a lot of songs that I’ve played. We put together a small track listing of me playing along to the actual recorded versions of a lot of people’s favorite tunes. On the next one I’m getting even more licenses but on this one I’ve included a bunch of bands that I’ve played for and still playing for. That’s the notable difference. On the first Atomic Clock, I didn’t get any licenses so I merely played to the band Mechanism which at the time was my main focus. I even played two instrumental tracks of Mechanism as opposed to playing the whole song. This time I’m not playing instrumental tracks except for one from one of my more popular bands, but I’ve got all the basic instrumental backing tracks and I’m playing along to those as opposed to having all the vocals, samples and everything else on it. For the most part, that’s a major difference and that’s really exciting, seeing myself play to actual recorded tracks to some of these cool bands. It’s in the stages of editing right now, it’s coming along great, it looks better than the last one and way more pro. It’s an improved version of the last one, I’m still pretty light-hearted in it and I don’t take myself real seriously. It’s got a lot of footage that the last one didn’t have. So I’m sure people checking it out will see that it’s definitely a departure from the first one. That was done on a shoe-string budget, pretty much all by myself, but for this one I’ve got a team of experts helping me with it. So it’s really great and it’s called ‘The Atomic Clock: The Clock Strikes Two’.

Over the years, you’ve played with so many different bands. Is there a musical style you want to pursue, something you haven’t played yet?

Well, I get to play a whole lot of stuff that I do like playing. I’ve always talked about playing with the band M.I.R.V. from the Bay Area. Those guys are great and I want to play may be just one show with them but they have a great drummer named Jeff Gomes and he’s fantastic. And I’ve always loved playing with another band from the Bay Area which includes a member of M.I.R.V. That member is Brian Kehoe and he’s got another band called The Kehoe Nation. I love playing with those guys because it’s such a departure. It’s this crazy psychobilly thing, really cool stuff. Brian Kehoe might be better known to a lot of people as the face of Dunlop Strings. You always see him on Blabbermouth doing interviews with people. He’s an amazing player and a real pleasure to play with. So I like doing that, and I’d love to sit in with Stevie Wonder for a night on some of his songs! I love Stevie Wonder so much. But I’m really happy playing hard, aggressive metal. That’s my favorite stuff to play. I love playing a whole lot of double bass live and I love changing lives with every show. Like I love playing with Strapping for instance, because that’s a life-changing experience every night for people. Dethklok is another one. So much fun to play with, and I’d like to think that’s a life changer as well. When people see a Dethklok show, they go, ‘Holy moly! I’ve never seen anything like this before. My life is changed now!’