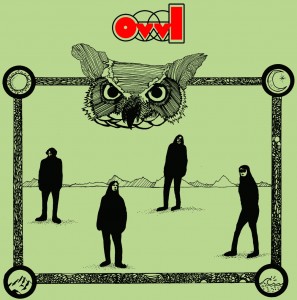 Since 2011, the Bay Area’s Ovvl have been entertaining audiences all over with their classic rock and punk inspired style of heavy metal. The band was founded by guitarists and brothers Axell Baechle and K. Baechle. The two recruited elder sibling Clint to man the drums, and soon after found bassist Melanie Burkett, thus completing the current lineup. The band has steadily toured the states since their inception and released their self-titled debut record in Fall 2012. I caught up with the band after seeing them play a house show in Concord, CA- we got to chat about their current three week tour of the western United States, the making of their debut record, the family dynamic and their upcoming second album among other topics. Enjoy the conversation below, and be sure to catch the band on tour over the next three weeks as they trek across the western half of America.

So first thing, you guys have apparently changed your name slightly, from “Owl” to “Ovvl”. Care to explain that?

Clint: Yeah, we were trying to be sneaky about it. Apparently, people noticed it anyway. We kind of changed our name for legal reasons to “Ovvl”, we still pronounce it like owl the bird. We also did it to distinguish us from the other crappy owl-related bands that are out there, because there are a lot and most of them suck. We don’t want to be associated with any of the wrong “Owls”.

So you guys released your self-titled album about a year ago, right?

Melanie: Yeah, we put it out almost a year ago.

Clint: We did it in pieces here and there, we finished the basic tracks in a few days and then we went back in and did subsequent guitar and vocal overdubs over the course of a year.

Are you happy with the record looking back?

Clint: If I was to hyper-analyze it, I would criticize the musicianship. Basically for me, the first Ovvl album is a time-capsule of what we were doing at that time, which was making a band that would be awesome and fun. It’s more playful than our second album is going to be. You can tell that we were having fun in the studio, just using all the stuff we could get our hands on. That’s why there are all the interludes and the sound effects-

K.: We’re about to do a tape only re-release of our first album though, probably in time for November.

I believe I saw somewhere that the second album is well underway?

Clint: Yeah, mixing is pretty much complete for the second album.

Was the recording a little more concise this time?

Axell: It was definitely less stretched out.

Clint: But it was still stretched out. [Laughs]

Did you go back to Earhammer Studios for recording the second album?

Clint: We actually went to a new one. We had this idea that we want to record every album we do in a different studio, if not that than at least with a different engineer. That way all our albums sound a little bit different from each other. We went to Lucky Cat in San Francisco and recorded it with Kurt Schlegel. We tried to be heroic and record the whole album-

Clint: Yeah, right after we got home from our full US tour. We didn’t schedule ourselves a day off in between the tour and the recording. It turned out we weren’t able to finish recording the album in the three days though.

Melanie: There are a lot of epic songs that needed different parts, different harmonies, keyboards and synths. We needed a couple extra days to track.

K.: We ended up spending seven days total on tracking.

Axell: We did it in a week, which is pretty good. ‘Master of Reality’ took two weeks! [Laughs]

Clint, you’re the veteran road warrior in the band. When you’re all on tour, do you try to impart advice and wisdom to everyone? Do they listen?

Clint: I try! I’d love to give them advice and have them not make mistakes that I made in the past, but in the end they have to make and learn from their own mistakes too.

Axell, what was touring like for you since you were pretty fresh out of school when you hit the road?

Axell: Yeah, I had been six months out of school at that point. Touring was fucking great man. I traveled the US as a child-

Clint: He was in a circus.

Axell: Hitting the road as an adult gave me a whole new perspective of the US. It’ll continue to do that with every place I go.

With you three, Clint, K. and Axell, being brothers in the same band, did you guys grow up in a musical household?

Axell: It was our dad mostly.

K.: He’s always been really into rock and roll, and he saw a bunch of shows back then. He tripped on acid back then, so he’s cool.

Clint: He definitely took me to a couple of Grateful Dead shows as a child. [Laughs]

Melanie, what’s it like for you to be jamming with well, a family?

Melanie: It’s interesting… I don’t know, it isn’t really anything different compared to any other band. When you’re in a band, I feel like you’re in a relationship or a family anyway. I grew up with two brothers, so it’s kind of like being a child with my brothers all over again.

Clint: For us, it’s kind of like we have a sister that we never had before.

So this tour is Ovvl’s second really extensive US tour, right?

Clint: It’s not a full US tour, it’s just the West Coast and the Southwest.

So being that you guys have been everywhere by now, what part of the states has been the most receptive to Ovvl’s music?

Clint: The Pacific Northwest in general.

Melanie: Everywhere has been great for us really, the Midwest, Austin, Wisconsin, Milwaukee, Madison-

Axell: Even the goddamn South.

Melanie: We seem to be a pretty welcome crew wherever we go. It’s nice.

This weekend Ovvl played a dive bar in SF, a warehouse in Oakland and this house show in Concord. Of all these different kinds of places, what has been your favorite setting to play a show?

Axell: As far as bars go, our friends’ bars are the best places to play. House shows are always fun unless you have to sleep on a couch full of cockroaches.

On the first album, a few songs are really long and stretched out. How does the material on the second album compare?

Alex: We did more math before writing the riffs.

Melanie: We learned how to do calculus. [Laughs]

This tour has you guys going as far as Tijuana and Boise, ID. When you’re booking a tour, is the strategy to just plug in as many dates as possible? Or do you perhaps go with a specific routing in mind?

Axell: We never want to take a day off.

Axell: Okay, we want to take a day off but our work ethic doesn’t allow for it.

Melanie: We did take a couple days off in New York last time, but even on our days off we’re practicing and writing songs.

Axell: Days off tend to happen when the van breaks down. [Laughs]

That kind of touring contrasts heavily with what say, Bolt Thrower did where they flew all over the country and cherry picked dates.

Axell: There’s no reason for us to go to a different continent and play just a few shows. That seems pretty ludicrous to me.

Melanie: If we had the money and someone wanted to fly us down wherever and we could hop across the country, we’d be down. It would be super fun to hit up different areas of the continent within days of each other. As a self-sustaining band, one that we don’t have funding for, it makes more sense financially to go from town to town.

Clint: We book our own shows and we don’t have receive any guarantees, so it’s actually a better strategy to play a show every single night than try and take a couple days off in between. We don’t know which shows are going to pay at all really.

Axell: Every night it’s a gamble.

For the three brothers, do you guys have a kind of special onstage chemistry?

K.: For me it’s definitely true.

Axell: It’s been described by each of us on different occasions as nearly telepathic. Brainwaves going through the air, transmitting riffs in the night sky!

When it comes to band stuff, do you ever run into situations where you have to say “Okay, we’re family now, bandmates later” or vice-versa?

Axell: Well you know, we argue about every song and we argue until they’re the way we want them. It always works out.

Is that what songwriting is like for you all? A lot of back and forth?

Clint: There is arguing sometimes.

Axell: There are things that need to be worked out, but it’s always for the best.  It’s always better to have more than one opinion.

K.: We’ve had a lot of songs that came in mostly completed, but they kind of morphed as we played them as a band.

Clint: We thought they were done, but we went back in, found out that some people weren’t actually happy with how the song was written the first time and changed things.

So does Ovvl write as a group?

Axell: Absolutely. Things will come in from person to person, but they always go through the filter of the four of us.

Clint: Generally, any riff that ends up in a song is something that everybody liked.

Anything else you all want to add about the tour or the upcoming album?

Melanie: Buy our shit! Get us to Europe.

Axell: We’re going to Europe and it’s going to be fucking crazy.

Oh, so it’s all booked up then?

Clint: It’s the first tour we haven’t booked. Someone else is booking it, that’s being worked on right now. It’ll be five weeks long, so we’ll be all over the place.

Axell: We’ll be sticking to the mainland and working our way to the UK.