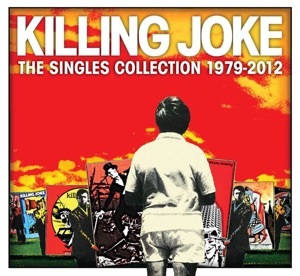 English post-punk legends Killing Joke have been around since 1978, and their recent performance at the Henry Fonda Theatre in Hollywood proved the fact that they’re still going as strong as ever, legitimately giving their fans a good time at their shows. Often heavily cited as major influence by a multitude of hard rock and heavy metal bands, Killing Joke’s music was far ahead of its time in the band’s early days, and only continued to strengthen and diversify with every album. Now even as they are 15 albums and 35 years deep into their career, frontman Jaz Coleman, guitarist Geordie Walker, bassist Youth Glover and drummer Paul Ferguson are hungry and eager to record a new album soon. A few hours prior to that memorable Los Angeles show, I had the pleasure of sitting down with Geordie to discuss the tour, his hollow body instrument, his rant on smoking rules, and more. Enjoy this highly candid and entertaining conversation below, read my review of the LA show here, and visit Killing Joke online using the links at the bottom.

How’s been everything been going for you guys on this tour? I believe tonight in LA is the last show of the tour.

Yeah, really well! I do believe it’s the best we’ve ever played, to be honest. Philadelphia was almost a religious fucking experience to be quite frank (laughs). Fillmore in San Francisco was good. But it’s been kind of hard work with a lot of long drives. For some reason, when I was younger I thought living on a bus with ten other guys was glamorous. What the fuck was I thinking? (laughs) So yeah, it’s been a bit trenchy, and the smoking rules are really starting to irritate me.

I was about to ask you about that! How have you handled playing on stage without being able to smoke?

Oh, I gave up smoking on stage but funnily enough I did have one on stage last night, I must admit. It was a little club. I really look forward to getting a hotel with a bath sometimes. Usually I wake up at six in the morning because the room isn’t moving, but instead of having a ciggy and going back to sleep I have to get dressed and stand outside the bloody hotel, which puts me in a foul made for the rest of the day, to be quite frank (laughs). I’ve only had two smoking hotel rooms on the whole tour. I live in Prague. You can smoke where you like, go shopping, have a swift coffee and a cigarette. Liberty! Who would have thought that it would be a communist country you’d have to go to, to find liberty? In Prague, it’s just common sense, really. If it’s a family restaurant and there are mothers with kids in there, you don’t smoke. You can smoke where you like, and some places have non-smoking sections. A couple of the restaurants, specially the vegetarian restaurants are ones where you can’t smoke at all. Strange that, isn’t it? (laughs) In San Francisco the other day, the ’15-feet’ rule just baffled me. I was like, hang on a minute, so if that car turned its engine on and I went and lit a cigarette and stuck my head right by the fucking exhaust, I’d get arrested for fucking smoking? It’s an absolute fucking joke. 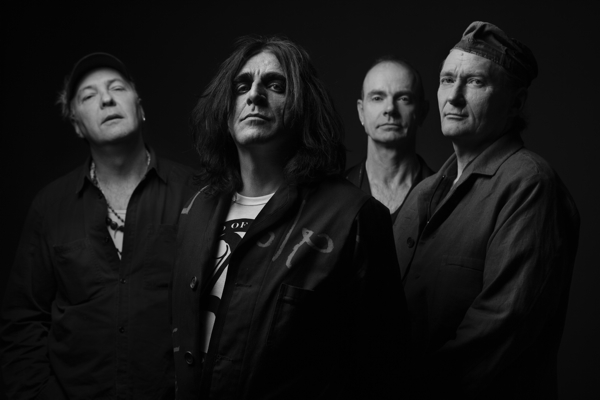 That’s funny. So, talking of this tour, has it been mainly about the Singles Collection that came out just recently?

Well, it wasn’t my bloody idea to put out that singles collection anyway, I’ll tell you that straightaway. I made my best friend Killing Joke’s manager, even though everyone warned me (laughs). He’s a real boxing aficionado, knows all the listings of the fights and the whole thing, and he’s very much like that with our back catalog. The record company thought it was a good idea, but a lot of this tour is basically to raise profile for a new album. That’s why we’re here. All we’ve got to do now is make the record soon, so the profile tour isn’t eighteen months before the month. So that’s what I’m looking forward to.

So you’re not exactly playing songs just from that collection then.

No, there are a few of the old singles in the set, but in a way you’ve got to play it like a DJ. You’ve got a palette of your own songs and some of them work. At certain times you’ve just got to read the room, and try and play it differently every night.

That compilation came out last year but there was also a new album recently called ‘MMXII’. Where do you see the musical direction of Killing Joke going? You’ve had such variation over the years.

We just try to surprise ourselves. That’s why the albums never sound the same. So yeah, we just keep coming up with stuff that still surprises you.

With these changes on each album, how has your guitar playing style developed over the years?

I just found the right instrument pretty early in the game, which is a hollow body. It has a bit of a life of its own. I think I’m starting to play with a little less violence on the right hand, which has helped me a lot in definition, if you know what I mean, and not breaking as many strings either, touchwood. I used to snap the D strings and be spiteful with certain chords. 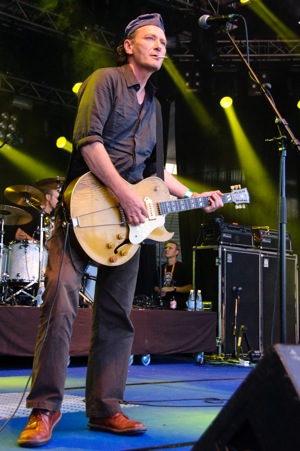 How did you find that instrument in the first place?

I was very lucky. I got a real Les Paul deluxe when I was 15, and then with the money I had saved from the two real jobs I had as a youngster, I bought a little SG Junior. I was noticing that if you play an interesting chord with a distorted sound, the harmonics of the distortion would make the chord disappear. So I thought what I’d do is get a semi-acoustic so I’d still have the electric sound, put a little contact pickup on it and I’ll mix an acoustic sound with it. I came across an old Gibson catalog, saw one of those types of guitar, and went, ‘Look at that! What a beautiful looking guitar!’ I found one in London for 40 pounds, plugged in and the sound was just there. I didn’t even have to fuck around with the pickups, and discovered that you don’t actually have to drive it as hard as you would drive a solid. So yeah, it’s a very musical instrument. The neck is perfect for me, and that trapeze bridge is such that you can push it down into the body slightly even as you play. You’ll get nearly a semi-tone out of the G-string. My tuning is different too. I think the guitar likes to be strung a whole tone lower. It suits the resonance and the volume of the thing, and you can use heavier strings. I’ve got 58s on the bottom. Basically if I play an E-position chord, it’s D.

That’s very interesting. With this hollow body guitar, I guess it’s just easier to get a natural resonance and sound.

Yes, absolutely. You’ve just got to watch it at certain stages. If I’ve got a low ceiling, I’m in trouble (laughs). And you cannot leave it on. As soon as you’re done playing you have to turn it off. In certain songs on certain stages, with gaps in stuff like ‘Change’ and ‘Sun Goes Down’, I’ve ended up getting a volume pedal which I simply ride back when the song is starting to kick off again.

I think you’ve also used fully acoustic guitars, specially on old Killing Joke albums. Have you had a chance or reason to use those recently?

No I haven’t, although I have my eyes on a McPherson 12-string but I think they are about $8000. I’d like to get my hands on it and modify the neck, because 12-string guitars tend to be quite fat in the neck and I’ve got really small hands and fingers. It looks beautiful and you can get it in different depths. It looks like it will sound like an orchestra in a box. I’ll get my hands on one some day, somewhere in the Southern States.

If you get one, do you think you’ll use it to write and play music for Killing Joke?

I really don’t know, it’s hard to say. I’ll probably end up using it for overdubs, but in those guitars the neck position pickup backed off on the volume just sounds so beautiful.

You mentioned that the current tour is a profiling for the next album. What’s the plan for this new album? Have you started writing?

I’m six track in already, but it’s kind of hard getting us all in the same place at the same time. It tends to happen these days only when there are engagements booked, like gigs or rehearsals or whatever. Youth’s got his own studio in Spain but it’s right at the top of the mountain. I kind of get the idea that everybody likes Prague because you can work but if you need your own space there are lots of distractions, believe me. So we’ll just see when we can get everyone together, because I’d like to capture the sort of chemistry we produce live. When we started making records, playing gigs wasn’t that much different. You’d rehearse, you wrote the songs, you mic’d it up and you played it! And now if you’re not careful, you might not even see the fucking drummer and the maker of the fucking record. It’s all bits of this, cut-and-paste. It can sound impressive on first listen but after subsequent listens, it’s lacking human imperfection. The imperfection is what makes it magical somehow. So I’d like to get it back to the old school, like don’t go into a recording studio until you’ve fucking written it and rehearsed it. Prague might be the venue for that.