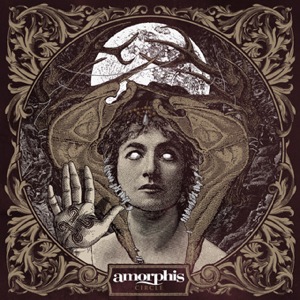 Led by guitarist and main songwriter Esa Holopainen, Finnish melancholic dark metal band Amorphis have never shied away from trying different things and defying genre boundaries on each of their previous ten albums thus far in their career, and the upcoming eleventh studio album ‘Circle’ will continue this trend, and comes out on April 19th in Europe and April 30th in the US via Nuclear Blast Records. With a slightly darker and more incisive sound, this is another interesting piece for extreme metal enthusiasts, Amorphis fans as well as non-fans. A few days ago, I spoke in detail with Esa to discuss the making of the album, working with Peter Tägtgren, touring plans, and other projects. Read the conversation below.

I was listening to a couple of songs on your upcoming new album ‘Circle’, and judging from the music, the artwork and lyrical theme, to me it seems like it’s slightly darker as compared to your recent albums. Would you agree with that?

Yeah it definitely is, even though it’s a bit more of a guitar-oriented album. You have the guitars more upfront in terms of the sound. But when you look at the theme and the cover, it’s definitely a bit darker than a couple of the previous albums.

Is the music composed around the theme or is it a completely separate thing? Do you always write the music first?

Well that’s usually how it goes. For this album we recorded demos based on the song structures and gave them to the lyricist just to inspire him with what he wants to write about. The music inspires him to write all the lyrics, so he came up with the idea and the concept for Circle and for us it has really fitted well into the music. Then we proceeded from that and I got contact for the artist Tom Bates who did the cover art. We were searching slightly different art from what Travis Smith did, and I think the main theme of it was the have the shaman in the cover art and to have some of the things we have in the lyrical concept to describe the album. So he drew a sketch and really it was just exactly what we were looking for. So that’s how we proceeded with the artwork and I’m totally happy with how that turned out. It really describes well about the music and about the lyrics. 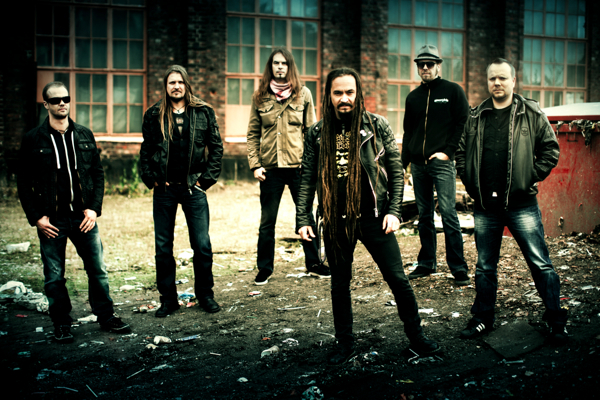 You worked with Peter from Hypocrisy on this album, and I actually interviewed him very recently. What was it like working with him?

It was great! It was really professional. We’ve known each other for a really long time. First we met Peter in 1995 when we toured together with Hypocrisy, and ever since then we’ve been seeing each other once in a while on the road. Usually the main topics of discussion with him are about how his studio is doing and so on, and we ended up discussing about him producing Amorphis. This time it actually felt like a good idea because the albums we’ve done till now have been all produced by ourselves, but now we felt like it would be nice to have some extra ears to have a listen to our music and to give some ideas. So we caught up with Peter, and luckily he had some time for us because otherwise he’s pretty busy with his bands and his studio. So he got time, but instead of us going to Sweden we brought him here to Finland and he was here for five weeks recording and producing us. It was great for us. Pain and Hypocrisy are different kind of metal music from what we do, but Peter as a person is a very similar kind of a guy to what we are. We like the same bands and the same things, and he’s a very easy guy to go along with. So it was really like a friendly professional relationship at the studio and it was what we needed.

That’s very cool. So, the previous album came out in early 2011 and it’s been less than 2 years from that. Between albums, what exactly inspires or influences your writing?

I usually work with the songs for a while. I need some time for myself and concentrate, then I just go into the mood and start to write music and see what comes. All the good music inspires me, but when I start writing my own music I try to erase almost everything from my mind. I don’t think about, for example what we did on the previous album, and I don’t think about what the next album should sound like. I just start to write music and see it from there. Usually people think that you tour, then you release an album, so it’s like a bread-and-butter thing, but making an album and coming to the day that you’re actually waiting for it to be released, it takes a lot of time and effort. From the time the writing starts to the release of the album, it takes at least one-and-a-half years. For all that time, you are involved with the new songs in some way or the other, from writing to producing with band mates to rehearsing the music, then to do demos with the band, book the studio, go the the studio and work on the songs there, it’s actually a pretty long process and it’s not that obvious that you just release an album. When you’re waiting for the album to be released it’s natural to be excited. For me, I’m as excited for this new album as I was for the first Amorphis album. When you sacrifice a lot of your time and effort for something, you have a lot of feelings for the release as well.

Exactly! Well, after an album is released there’s a lot of touring involved these days because you have to go out and promote the album. Do you have to write for the next album while on tour sometimes, or do you totally separate that from the actual writing process?

No, I can never write on the tour. So when I get back home that’s when I usually take the time to write music. It’s impossible to do it on the tour and I’ve never tried it, but even without trying I can definitely say that it doesn’t work on the tour. You can’t do anything on a tour except travel and concentrate on the shows (laughs). But this is all we do. It’s our work and our job, so basically we don’t have any other work when we’re home. What I do is, when I get back home, I take some time and start to write music.

For this album cycle, what plans do you have?

There are a lot of plans already. The album comes out in a couple of weeks, and we’ll do a few shows here in Finland. The day when the album is releasing here we will be in Israel for a show, and then we continue with the summer festival. The festival season starts here in June and that continues till August. After that we start to tour with the album. There’s plan to do two weeks in Russia, then South America and probably Australia and Japan, followed by Europe in November through December and January. I don’t know what happens after one year. Probably we’ll still be touring (laughs). But that’s the plan for now. 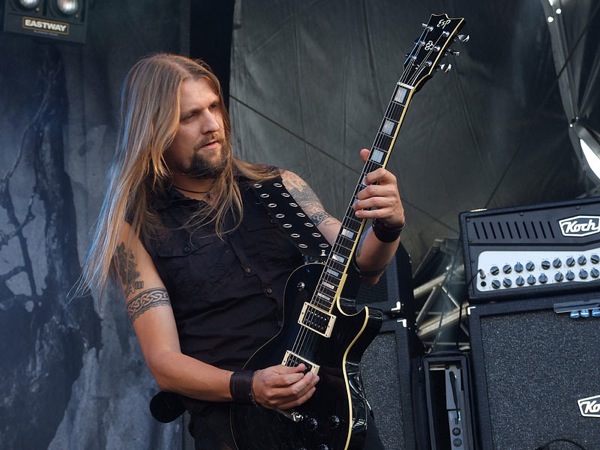 Talking of your own setup, I read that you’ve been using ESP guitars and Koch amps. Are you still using that or have you changed anything?

No, I’m still using the same gear. I’m usually a player that doesn’t change the gear. It’s like a everlasting process to try to search for better sound, but I realized the fact that once you’re happy with your equipment you should stick with those because you can always develop your own sound with it rather than by changing amplifiers or guitars.

In the past you were also involved in a couple of other projects. Do you think you’ll find time to do anything other than Amorphis in the near future?

Well, it’s not an impossible idea to do anything else. Usually it’s just a matter of time and I always prioritize Amorphis as the first thing. I had a death metal project called Chaosbreed and I met some of the guys quite recently. We were saying that it would be nice to do something together in the near future, so it might happen. That’s a great project, really old-school death metal. Then I have some plans to do solo stuff too, so when I have time I’ll probably do that.