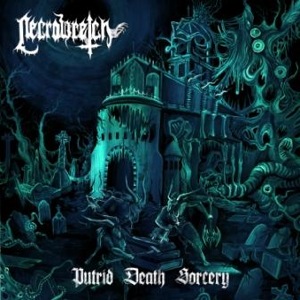 French old-school death metal band NecroWretch started out in late 2008, and after releasing two demo tapes and two EPs, they have now come out with their debut full-length album ‘Putrid Death Sorcery’, which hit the European markets on January 28th and and the US on February 5th via Century Media Records. All in all, the band has an interesting backstory, and a few days ago, I caught up with vocalist/guitarist Vlad to unveil some of it. We discussed the making of the album, talked a bit about the band’s history and musical style, their future plans, and a few other things. Read the conversation below, check out a track from the album via the YouTube video embedded within, and visit the band online using the links at the bottom of this page.

Your debut full-length album ‘Putrid Death Sorcery’ was released on February 5th via Century Media Records. This must be a proud moment for you, as I’m sure you’ve worked hard on this album. How long has it taken you to write it and what was that process like?

Greetings from the tomb! Yes we’re very excited since our first album was just released! We’re really proud to puke out this hellish incantation after five years of intense progression. It took me eighteen months to write this album, it took awhile to get all the ideas in, but the final result is more bestial than everything I’ve dreamed before.

The recording process took only 10 days, according to what I’ve read on your website. How did you manage to do it so quickly?

Ten days is very long and unique in the history of Necrowretch. For our previous releases, we managed to record in one or two days very quickly. This time, we finally took all the time to record properly and to capture the true essence of the evil wretch.

Is there a difference in the band’s sound as compared to the EPs and demos you’ve released in the past?

First the drummer, because Mörkk is a lot more powerful and talented than our previous – dickhead – drummer. Also, we used new gear: new guitar and bass, powerful amps. Clearly you can dissect the music and clearly hear all the instruments, but it’s still a chaos maelstrom.

Century Media Records has been a great supporter of extreme metal, especially old-school extreme metal. So it’s nice to see that you’re signed to them now. How did this happen?

I think CM understands that Necrowretch is a metal band playing only with guts! Since the beginning of the band, our only goal is to play death metal to unleash hell. We don’t care about the rest, the only thing that matters is metal! Today we’re really proud to be part of the Century Media family– it’s a cult label which has released cult acts, such as ASPHYX, MORGOTH, GRAVE.

The cover artwork of ‘Putrid Death Sorcery’ does justice to the musical aura and the album title and the artist Milovan Novakovic has to be congratulated for that. Did you have any ideas or inputs for him while he was making this design?

Since the beginning of the band, Milovan has been our maniac artwork crafter. I think he’s like a member of the band, because he’s connected to the spirit of the wretch, he really managed to capture the pure essence of our evil message and puke it into the paper. I sent him ideas and some lyrics, and his deranged mind created the art. We’ll definitely continue to work with him in the future. 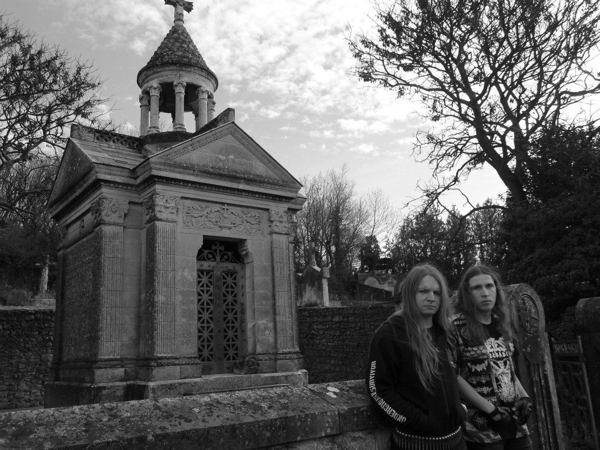 You’ve always believed in ‘real’ death metal, and that’s clear in your music. There are lots of bands playing this style these days. Do you think there’s an actual resurgence or is it a case of bands jumping on a bandwagon?

I think people get bored of the technical core garbage and want to get back to the roots of metal. That’s not my case because I’ve always listened to real death metal, and the only goal when forming a band was to play like Death’s Scream Bloody Gore.

Throughout the shows you’ve played in France, how much have you discovered about the French extreme metal scene and how much of it were you aware of before NecroWretch started?

France is more about poser dickhead bands than metal…Which is sad because we also have a lot of great underground acts, but nobody really cares…For real death metal, you can check out: Ritualization, Evisceration, Perversifier.

I noticed that your first two releases were the ‘Rising From Purulence’ and ‘Necrocollections’ demo tapees. The 1970s and 80s were the glory days of tape trading, and those were the days when people actually listened to tapes. Those days are long gone. So I find it interesting but unusual to see a band releasing a demo in tape form, in 2009-2010. How much did those demos help you in building an initial fan base?

I think it’s the natural way to unleash death metal. I’ve been following the path of the ancient legacy: tape for the demo, vinyl for the EP, CD and vinyl for the album.
Those demos are sold-out now, and I consider them as past history because our music has evolved and it’s a lot better now than in the demo. But without those primitive demos, I wouldn’t be here talking to you.

Your recordings sound brutal, and I’ve never seen your band live, so I must ask. How does your live performance compare to the studio material? Can the audience feel a greater sense of atmosphere while seeing you on stage?

We’re fucking possessed when it comes time to jump onstage. It’s like a bloody ritual, and no one leaves the show without losing some sanity. We really believe in our evil message, and I wish that the gates of hell would open while we play.

Talking of live shows, you’re confirmed for the Deathkult Open Air festival in Germany in May. Other than that, when can people expect to see you performing?

We are also going to play some shows in Europe, and we’re also working on a tour.

On the website’s biography, you mentioned that there’s a hint of ‘South American madness’ in the new album. Can you tell us which of the South American bands influence you?

You recently gave up your day jobs to concentrate fully on the band, and I really respect that. I feel more bands should be as dedicated to the music as you are. Before quitting your jobs, what was it like for you to juggle the day job and band activities, and how liberating is it now to be doing the band full time?

Vlad : We only quit our jobs to focus on the recording of the album, now we’re back to job duty. Sad, but mandatory to pay the bills (laughs).