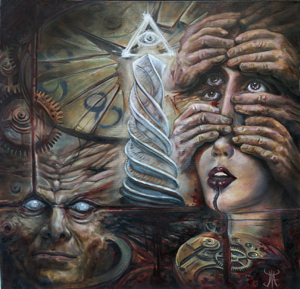 Based on the strength of their growing fan-following in the Philadelphia DIY hardcore punk scene wherein they’ve been performing actively since starting out in mid-2010, Cop Problem are about to release their self-titled debut EP, on March 29th. To those who’ve never heard of the band, this three-song EP is the first taste of what they sound like, and also a great indication of what to expect from them in the near future. The furious 8-minute effort not only exemplifies the hardcore D-beat style, but also presents other elements you wouldn’t normally find in bands that are part of this type of scene.

I reviewed their EP a couple of weeks back, and in an effort to further introduce this promising band to Metal Assault readers, here’s an interview I did with them. Enjoy the conversation below, and make sure you check out their official facebook page for all the info on how to order the EP, and to see the dates on their gig calendar.

First of all, I must say that the music on your debut EP fits the band’s name very well. How did you decide on the name ‘Cop Problem’ in the first place?

Joshua: Actually, our friend Steve Hackett who sings and plays bass in NJ band Bible Thumper thought of it. During our formative stages we would have different musicians come and play shows, and he was one of the initial singers we had before settling on our final lineup. We all felt the name fits and looking back- it’s a pretty poignant statement. Not just referring to police, but the military complex in general, as America has taken to “policing” the globe.

Talking of the debut EP, it’s releasing very soon. When did you guys start working on these songs, and how long did it take for you to write them?

Joshua: Randon had most of “Blinded By Power” written from the onset, we tinkered with a few parts as band for the final version, but the melodic arrangement was him. I experimented with a few different beats, but we all liked the d-beat backbone the best in the end. “Monuments” and “Along for the Ride” were more collective efforts. Randon and I each had some parts and we just kind of jammed them out until we had songs. Donny and Deb also help with the editing process by helping us cut out extraneous parts or adding new sections. Deb will then go in and lay down lyrics and start applying vocals. Randon
also will contribute to backing vocals and crafts the lyrics to his parts as well. All-in-all, it’s a fairly collective effort. Some members take lead in some songs, while other members spearhead other songs. We have a grip of new tracks we’re eager to get back into the
studio and lay down.

I like the fact that it’s so concise, at only 8-and-a-half minutes in duration. Was that your original plan, or did you intend to put out a longer EP?

Joshua: Thanks. Yes, we planned to just do 3 songs for this EP. It was our first time recording with Will Yip and our first collective effort in a studio. We’ve all recorded in other bands and did the demo together but we wanted to just go in and knock these tracks out and get this release under our belts before tackling larger projects. Everything went great and I’m sure we’ll be working with Will again soon.

I feel that the music has more to it than merely hardcore D-beat punk. Do you agree with that assessment? If yes, where do the other elements come from?

Deb: I would agree with that. While we all have a love of punk and hardcore, I think we each have really eclectic musical tastes both within and outside of those genres, so I think that it just comes through in what we write. We each bring a little something different to the table, so some band members’ influences are more pronounced on some songs, and others’ influences on other songs.

Would you say you’ve captured your on-stage energy into this EP?

Joshua: I’d say we’re all very happy with the sound of EP. Will Yip is a gifted studio engineer. I don’t think it was our intention to recreate a live sound exactly. I feel like live sounds are more spontaneous and raw and in the moment. And recordings should sound
like recordings. I think the energy captured on the EP definitely reflects our energy as a band and Will did a great job capturing our sound at that moment in time.

This EP has only three songs, but I’m sure you play a longer set on
stage. What does your set list usually consist of?

Donny: Our live set usually clocks in around seven or eight songs. Two of which (Hope With Out Reason and Answers To The Wrong Questions) are from the demo tape we released a little over a year ago. All the rest of the songs in our live set are unreleased as of right now. We have talked about doing another EP and possibly a split in the near future, but nothing is confirmed as of right now either release or label wise.

Joshua: Donny summed it up, but we do also have a digital only version of “Endless War” online. We’re discussing possibly re-recording that one for a later release as it’s gone through some adaptations. Getting back to the studio is definitely going to happen
before the end of the year.

I believe you did a CD-release show last weekend. How did that go?

Deb: It wasn’t really an official record release, but it was the first show where we actually had our vinyl for sale. The Show was in Doylestown, PA at Siren Records (who now also has our EP in-stock). It’s always a good time playing at Siren surrounded by vinyl and
awesome people.

There’s just something about the album cover that pulls me towards
it. Who designed it?

Joshua: Thanks. Jason Angst (www.jasonangst.com) crafted the cover art. He is a fantastic visual and tattoo artist from Pittsburgh, PA that has been friends with Randon and Deb for some time. We commissioned him shortly after laying down the tracks last year and sent him the lyrics to the EP. He laid down the original art as a large oil-on-canvas painting and then scanned the image for use to use on the EP. He worked in a lot of the lyrical motifs in the final artwork and we were all very stoked to see what he had come up with. 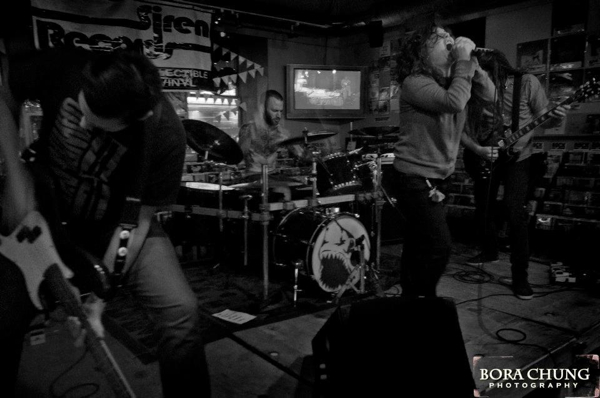 I think the female vocals gives your music a sense of uniqueness, and an edge over other bands of similar style. Did you set out to be a female-fronted band from the beginning itself?

Deb: No. There was nothing contrived about the choice of musicians in the band. Josh and I have been playing music together for many years and he asked me to come jam with the band because the vocalist at the time wasn’t able to play an upcoming show. It went really well and we all decided that my vocals and lyrics were a solid fit for the sound. I would hope that when people are listening to our music they judge solely on the quality of the music, not what the band members have between their legs.

Joshua: Just to piggyback on Deb’s answer-she is right. Definitely nothing contrived here. Cop Problem started as what I would call a very “punk” project. We had a rotating cast of musicians with Randon and I being the core during the formative stages. Different shows
would showcase different musicians from the area that were and still are our friends with. I feel it added to sense of immediacy and added an element of surprise. All of the people we worked with were very talented and well rehearsed with us. We asked Deb on board because she is an incredible singer and lyricist, her gender really never came up for discussion. We’ve settled into a steady and solid lineup and will be forging ahead as is for the foreseeable future. I am really happy with the way the live show and new songs are progressing.

How active is the underground scene for bands like yours in Philadelphia? Do you get to play a lot of shows or is it sporadic?

Donny: The scene here in Philadelphia is amazing. We have shows everywhere from basements, living rooms, art spaces and dive bars to church basements as well as decent sized venues like The Barbary and Union Transfer. Our scene is very lucky to have people like Joe Hardcore, Sean Agnew, Greg Daly, Jamie Getz and everyone else at R5 Productions (http://www.r5productions.com) and Philly Shows (http://philly-shows.com) who help out bands that come to town. There is also a great network of smaller house shows all over Philadelphia. It seems like there is never a shortage of places to play when bands come through on tour which is great.

What plans do you have for the near future, in terms of gigs?

Donny: Our main goals for playing shows are to make new friends, play new places and do as many three-day weekends as possible. In July we will be hitting the road for a ten-day tour down to Florida. After we get back from that tour I am sure it will be business as usual with more recording, more shows and even more touring.

It’s interesting that you’re also running the Blow The Scene
website. How actively are you involved in that?

Joshua: BlowTheScene.com is my baby. I started it a couple years ago as a hobby and it took off more than I expected and has been taking up more and more time lately. Really it’s just an extention of my lifelong love of music and art. I am always going to shows and hanging with different musicians and artists, so this just gives me an excuse to do it more haha. And finally getting to put my degree in English writing to use haha, as I handle the majority of the written content. Doesn’t pay the bills, but sure is fun. Getting ready to
kick off a new batch of columns with some some rad musicians and artists including Carl Auge of His Hero is Gone and Drain The Sky and Thom Schlatter of Black Kites/ Less Life, and many others. I think people will be stoked to see some of these renowned musicians and artists giving the inside scoop on their art and writing projects included with our usual music coverage. Have to give a big thanks to all the people who helped design and get this thing off the ground with various contributions (Larry, James, Andy, Deb, Dante, Anne,
Bora, Adam, Tim), it was definitely a team effort! Our photographers Dante, Anne and Bora stay incredibly active and prolific. I am hoping to pry some more work out of all these cats soon though, haha. Thanks for checking it out and thanks for this interview!