June 17th 2017, Glass House, Pomona CA: In 2015, death metal legends Morbid Angel decided to revisit an old chapter of their career, bringing vocalist/bassist Steve Tucker back to the helm and parting ways with David Vincent. In 2017, they also brought in two new members, Scott Fuller on drums and Dan Vadim Von on guitar, and set foot on a North American headline tour to present this new incarnation to fans across the continent. With Suffocation, Revocation and Withered as support acts, they made it a lineup hardly any death metal fans could afford to miss. Last Saturday, the tour arrived in Pomona, California, to turn the Glass House into extreme metal valhalla.

Doors opened at 6:30, and in the initial stages of the evening, the venue was sparsely populated, mainly due to the fact that the bands played a sold-out Los Angeles show at the Regent the night before, and this show in Pomona got the leftovers, so to speak. Nevertheless, it got reasonably packed for the main bands later on. But starting proceedings at 7:30 were Atlanta, Georgia quartet Withered. Having been around since 2003, theirs is a well-respected name within the genre, and some may even remember seeing them at the Grove of Anaheim in 2010 as an opening act on the Blackest Of The Black tour. Back then they were supporting the ‘Dualitas’ album which was released that same year, and owing to lineup changes, it took them another six years to come up with the latest album ‘Grief Relic’. But they are definitely back to their vicious best now, as evident from their performance here, their 25-minute set of bleak, brutal extreme metal serving as the ideal appetizer for what was to follow. 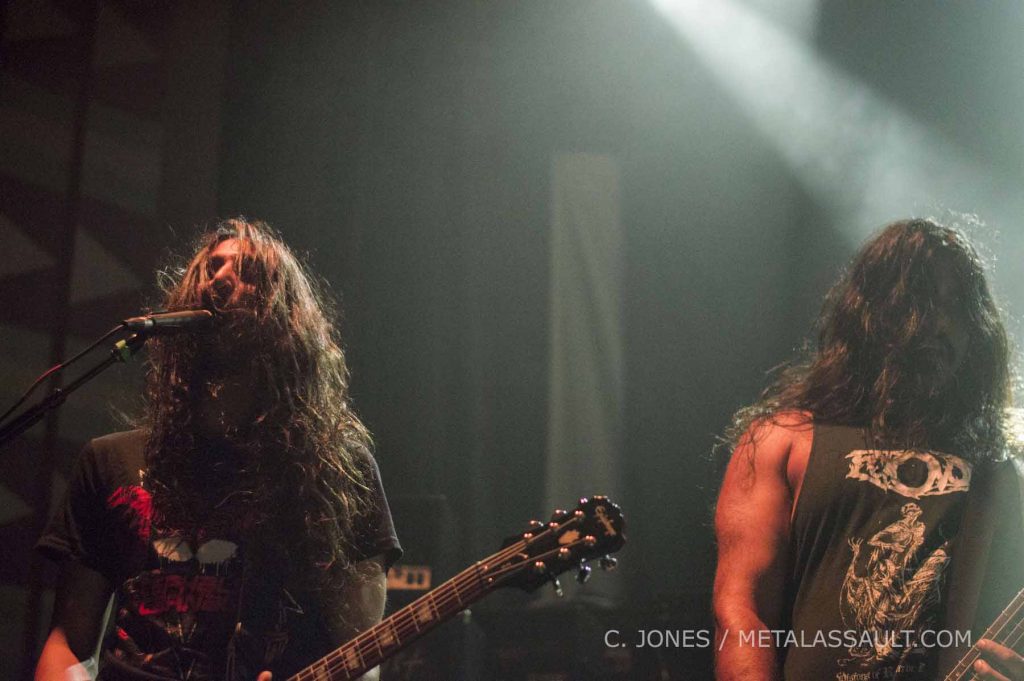 Next up, Boston, Massachusetts stalwarts Revocation hit the stage and ripped it to shreds with their technical death/thrash wizardry. This was not their first time playing as an opening act on a big package tour. By now they’ve experted the art of making maximum impact with a 30-minute set, and as always, they utilized their stage time to the fullest by performing three songs off of their latest album ‘Great is Our Sin’ (2016) and two from the 2014 album ‘Deathless’. In 30 minutes they presented a much wider range of musicality than the bands that followed them and played much longer sets. Incorporating their musical prowess in extreme metal in a manner like no other, Revocation is a true gem of a band that the metal genre should be proud to call its own. With what was easily the most dynamic set of songs we got to witness at this show, Revocation was by far the best band of the evening. While this should obviously be taken as a compliment, Revocation has consistently been better than the headliners on these tours for a long time now, and instead of playing a mere 30 minutes on every tour, it’s high time they started headlining their own tours, and hopefully that time will come sooner than later. Revocation reigned supreme, once again. 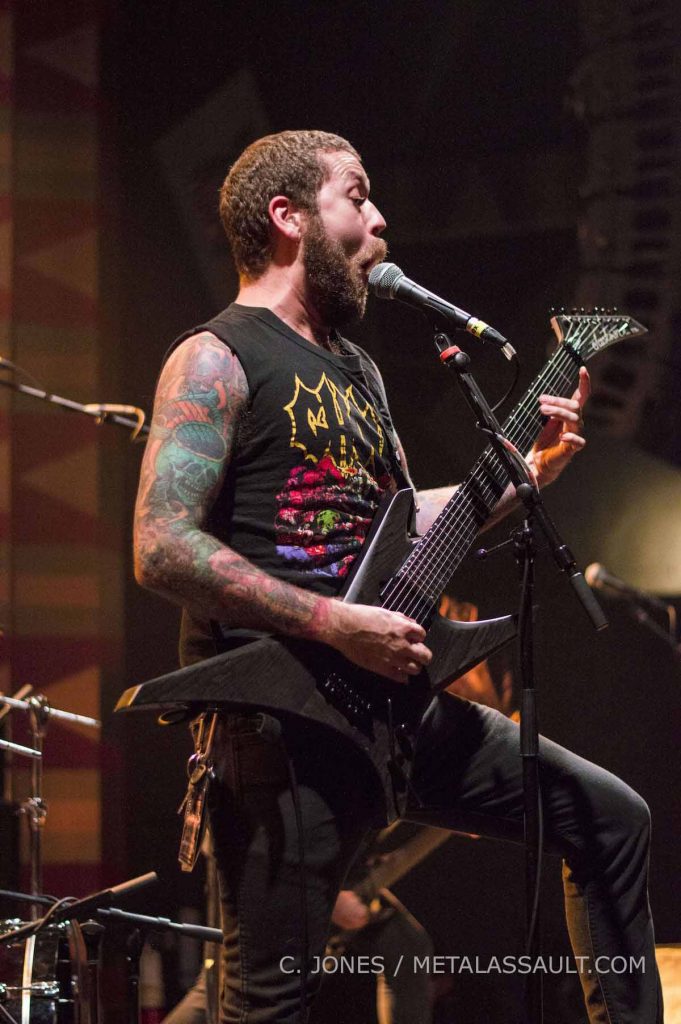 At 9 o’ clock, Long Island, New York death metal veterans Suffocation took the stage. For those uninitiated, the band’s original vocalist Frank Mullen continues to be a part of the lineup but only records albums and retired from full-time touring activities in 2013. Since then, Suffocation has been touring with fill-in vocalists, and in 2017, it’s been Kevin Muller fronting a lineup that includes guitarist Terrence Hobbs as the only original member, and longtime bassist Derek Boyer who’s been in Suffocation for 13 years now. This is certainly a unique, somewhat strange situation for any metal band to be in, and props to Suffocation for continuing to fight the good fight despite the massive obstacles in their path. But the way their live show is perceived is purely open to interpretation and up to the individual. Anyone who has witnessed the Frank Mullen fronted version of Suffocation pre-2013 knows fully well that there is no contest between that and the current incarnation, because there was, is and will be only one Frank Mullen. But those who never got to see the band back then wouldn’t have a frame of reference and would most definitely enjoy modern-day Suffocation. Kevin Muller is great in his vocal delivery, and there is no questioning the talents of Terrence Hobbs, shredding away on his guitar and laying down those iconic riffs with effortless ease. And then you have Derek Boyer, one of the most entertaining bassists to watch live, plus new members Charles Errigo (guitar) andEric Morotti (drums) doing a fine job as well. They played an excellent 9-song set with a good balance of old and new material. Suffocation shows used to be absolutely insane when it came to the mosh pits and the crowd response, and while that wasn’t quite the case here, it was still a solid performance by a legendary band. 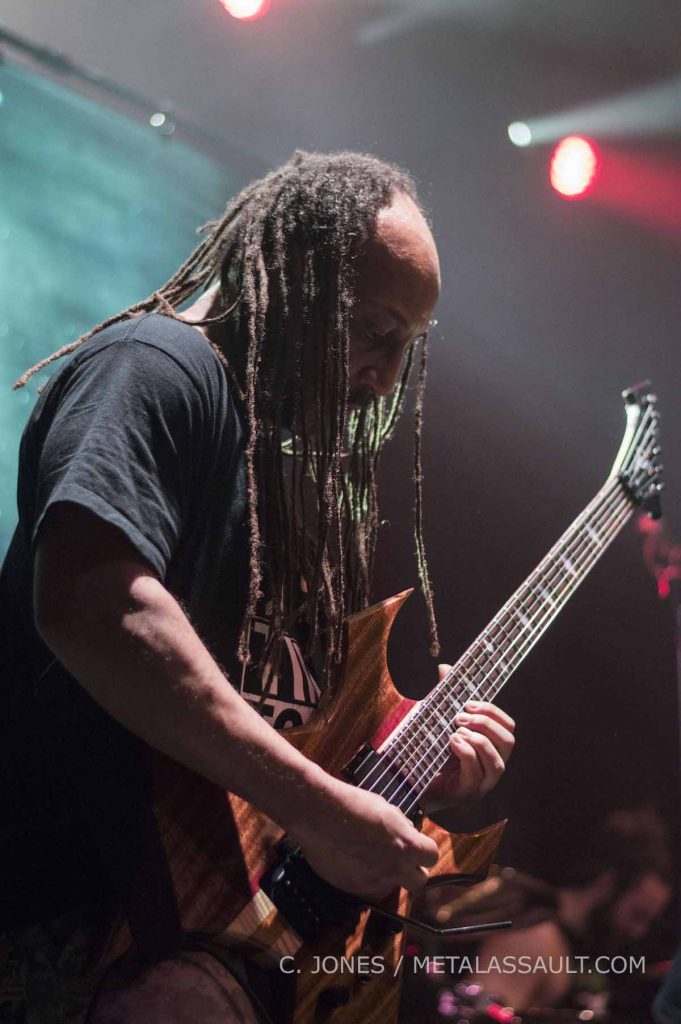 Suffocation set list:
1. Thrones of Blood
2. Pierced from Within
3. Return to the Abyss
4. Funeral Inception
5. Your Last Breaths
6. Liege of Inveracity
7. Clarity Through Deprivation
8. Catatonia
9. Infecting the Crypts

And lastly, Morbid Angel arrived on stage at 10:15 and dove straight into a 14-song set that was made up solely of songs from the three albums Steve Tucker recorded with the band in the late ’90s and early 2000s, i.e. ‘Formulas Fatal to the Flesh’ (’98), ‘Gateways to Annihilation’ (2000) and ‘Heretic’ (2003), plus one unreleased song called ‘Warped’, which is slated to be on the next album. One couldn’t help but notice that the performance was lacking because of the complete absence of the classic David Vincent fronted material. Hardly anyone is complaining about the band not playing anything from the ill-conceived experimental 2011 release ‘Illud Divinum Insanus’, but the first four Morbid Angel albums boast of the band’s best songs, and without those in the set, it’s simply not the same band. For hardcore fans that did not get to see the Steve Tucker era of Morbid Angel, this is a solid glimpse into a specific part of the band’s history, but it’s far too specific, and does not serve as an apt representation of the band’s repertoire.It’s like if Blaze Bayley returned to Iron Maiden and they did not perform any Bruce Dickinson material. Morbid Angel played Steve Tucker era songs when David Vincent returned to the band, so the vice versa should also apply. To anyone who has never seen Morbid Ange, a show with this set list is very strongly not recommended.

Besides the song selection, the performance itself left a lot to be desired, as the band seemed to be going through the motions and played as if this show meant absolutely nothing to them. Consequently, a constant stream of attendees was seen departing the venue half-way into the set and onwards, which is not something you’d expect to see at a Morbid Angel headline show. Regardless of the fallout between David Vincent and sole surviving original member Trey Azagthoth, Morbid Angel needs to revisit their strategy for live shows, because this show was massively disappointing.

All in all, an interesting extreme metal outing for reasons both good and bad. 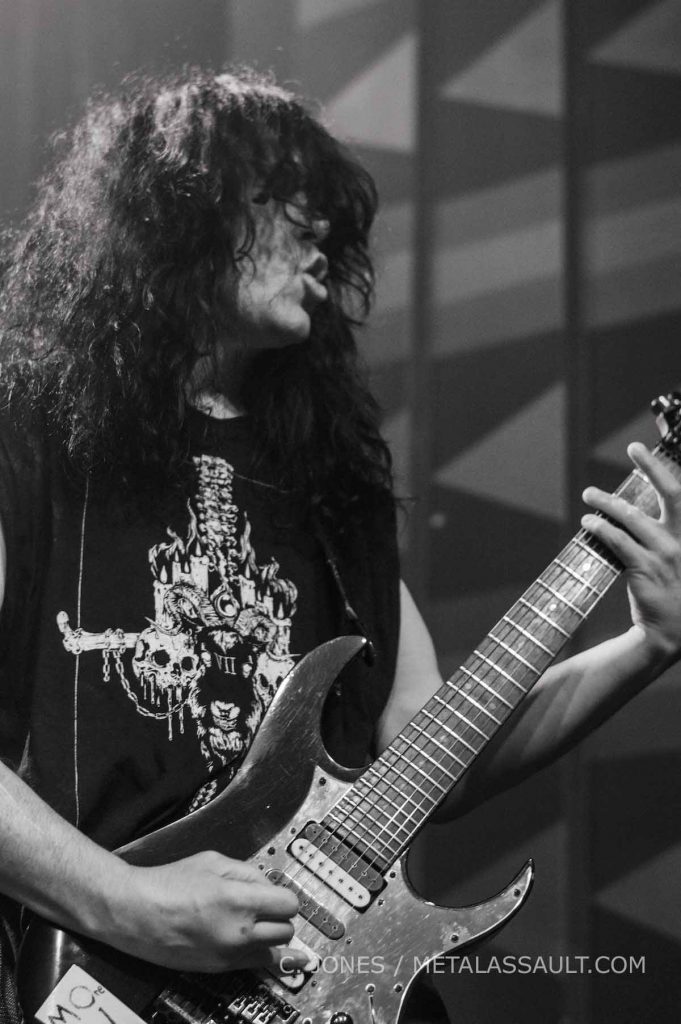