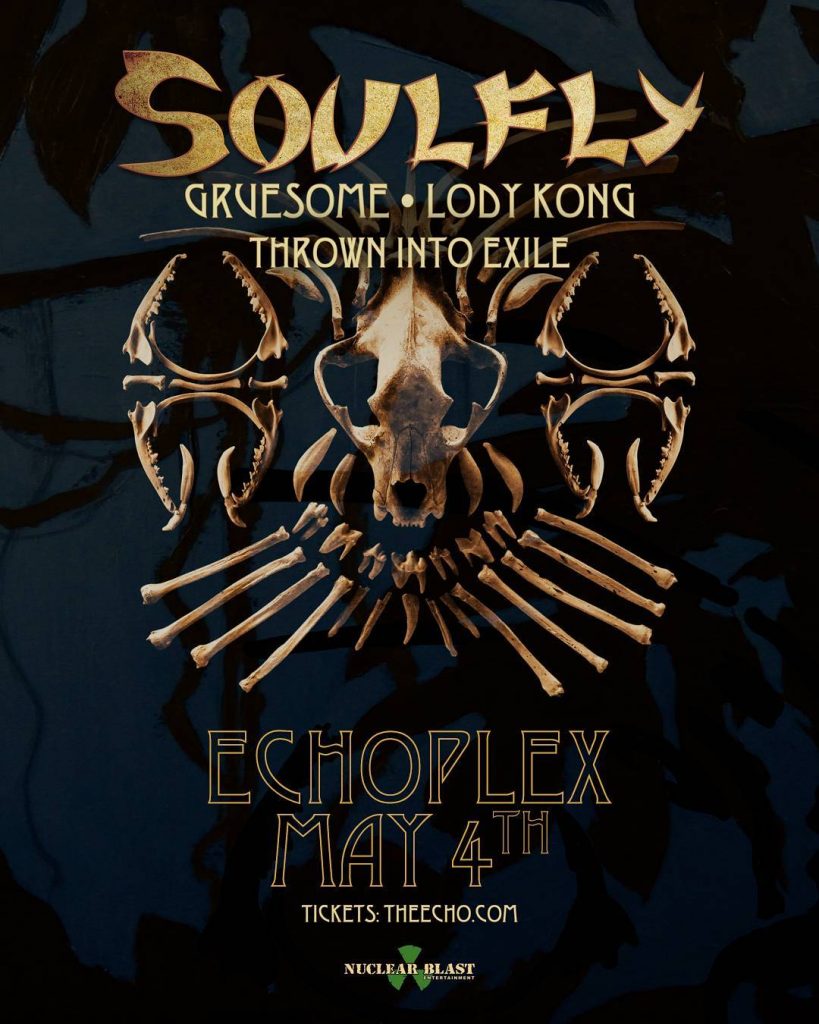 May 4th 2017, Echoplex, Los Angeles CA: “Keep it in the family” is either an Anthrax song or a way of life for some longstanding heavy metal icons such as Max Cavalera, who happens to be the main topic here, still reigning strong as lead singer for Soulfly which was the main attraction of my evening at the Echoplex on May 4th 2017. In direct support was Gruesome, and additional support came from Lody Kong, and Thrown Into Exile. This entire package worked excellently as a whole as you’ll understand more on why later, but for now just know that this night was action packed and filled with surprises.

I didn’t catch enough of Los Angeles’ own Thrown Into Exile to comment, but I have seen them in all their brutal action around town for years and while they have changed line ups a bit since the beginning this current set up is definitely a core group that holds their own amongst any talent. The next band up was a very special choice trio from Arizona called Lody Kong which is comprised of two young Cavalera brothers who actually are the offspring of Max Cavalera himself, and with their very tough brand of sludgy hardcore with punk infusions they really captured the modern day metal scene in all its essence with ease. These guys are a young powerhouse trio with plenty of interest in song variety, pace, and structure. The talent has definitely not skipped a generation, and metal blood or not, these dudes are carving us an inspiring future in heavy metal. The last song they played was apparently an unrecorded and unreleased special treat that definitely turned heads in the right direction. The stage presence, professional banter, creative mix up of pace in the beats and riffs really set the bar high for any young bands in direct competition as well as older bands for that matter. New metal in 2017 seems to be a mix up, mash up, spit out of old styles in a modern way that is quite exciting when intelligently executed as was the case for Lody Kong.

Then it was time for the most intriguing odd ball out in the line-up which was Florida’s own old school death metal band Gruesome. The deal here is they started as a Death cover band and then decided one day that they should write their own songs too. The line-up features members from Exhumed and Possessed and is nothing short of a brutally enticing good time in death metal. The result of this wild collaboration is quite impressive as they definitely master the covers and as for their own tunes, which dominated the set you can imagine it is almost as if they are writing new Death tunes without trying to be the legend that was once the original band Death. It was a nice change of pace from the other bands and the raw and gritty vibe of the old school death metal seemed to sell well for those who came solely for Soulfly. The ratio of Soulfly fans to Gruesome fans seemed to be in a constantly fluctuating competition, but the general consensus is that fans were won over to the other side by the end of it. Gruesome played a grueling set full of fast and ferocious tunes, and the charismatic nature of the vocalist complimented the strong creative musicianship as well. There is something so dynamically exciting in this band’s live performances that they really are a must-attend. I saw their headlining act at Complex a while back and it was even more exciting and intense in that more intimate setting with a longer set.

Once the pit calmed and the death came to a grinding halt, the best Soulfly live show I’ve ever witnessed reared its beautifully tribal face. Prior to their set I eavesdropped on the typical banter on how Sepultura is so good and Soulfly is just like Korn and totally nu-metal, so let me just add a few of the finest rhinestones to my outfit while you shed your sequins into the dirt on this one. The difference as I see what was happening when Soulfly came into fruition is basically apples versus oranges or pennies versus quarters. Soulfly and Fear Factory were at their first heyday in the late nineties and got lumped into a nu-metal category with incomparable bands such as Linkin Park, and Korn, and what the latter lacked in variety the former excelled at. Soulfly is tribal groove metal with death and hardcore roots and a steel backbone that incorporated some highly unique tones and traits that are not exemplified in any other band of its era.

While we all had our nostalgia roots in the late ’90s, the most active listens for me went straight to both Soulfly and Fear Factory because they had the most modern and flattering mix of sound at the time when metal was taking an unflattering plunge. Soulfly was one to keep them from sinking and sparked some later metal bands to carve their own path into the next wave of heavy metal. This show had a great setlist featuring only one song that resembled the likes of early ’90s Korn, and Max even went so far as to play a Nailbomb tune which was another one of his many side projects, although short lived. Out of all his bands which he mixed together well and never lost his style in any, I still actually prefer Soulfly even to the untouched Sepultura. Now that I’ve lost friends let me say that every time I see Max perform, his dreadlocks or basically one giant dreadlock seems to have taken on more of a life of its own and this just gives his already uniquely interesting persona that extra added fun character. The best part of the night was when the tribe of Soulfly was joined by very special guests from Fear Factory including Dino Cazares who riffed out the jams on ‘Plata O Plomo’ and stayed around for more fun tunes where eventually there were members from all previous bands on stage to join in on the organized chaos. It’s a really refreshing ideology to witness bands working together and supporting each other rather than ego tripping and competing in unhealthy ways. The strength in any aspect of life is found with unity and not separation, which is proven time and time again to be successful despite the difficult lesson to be learned. The cover of Probot’s ‘Red War’ was a powerful one and the typical cover of Motorhead’s ‘Ace Of Spades’ was rendered un-typical by the guest join on of Gruesome and friends. Somewhere around this point or after, Max kissed Dino on the head after the song ended and a new dawn of heavy metal hippies was born in the best way possible. Of course the grand finale involved ‘Eye For an Eye’ which will always be the only consistent member in the top two list of my favorite Soulfly songs.

The energy from this specific four band line up was nothing but positivity and love, and even though Max could conduct a room in a similar fashion no matter who else was around to join in, these guys all worked well together above and beyond the call of duty which made this night extra special. Seeing part of Fear Factory join in was a surprise and a treat that should definitely happen more often as despite the variety in genre traits in the musical department they collaborate well together in style.

Feeding off the back to back high energy shows leaves any heavy metal lover wide awake after it’s all said and done, and regardless of said insomnia potential, this is an extremely positive result. If the ’80s and ’90s have dug their way out of their coffin I hope they never find their way back because when mixed in the correct modern day threshold, the bond is powerful and suddenly the world seems to be as alright as it ever was or never was.