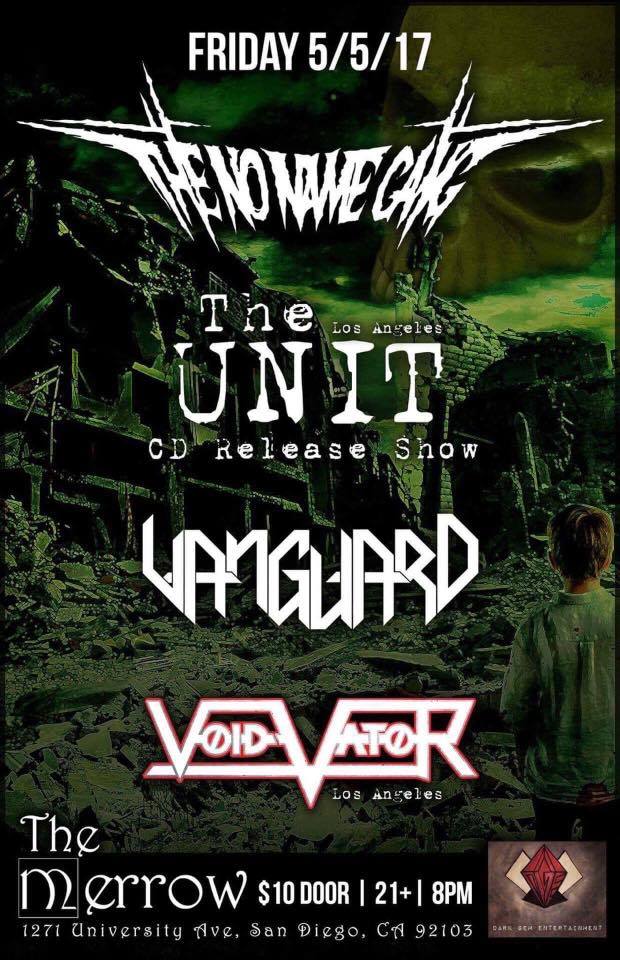 May 5th 2017, The Merrow, San Diego CA: It was the ending of a busy work week for many. On top of all, Cinco De Mayo fell on a Friday evening, and with that inspired some local metal folks to venture out and imbibe in San Diego’s finest. For this particular evening, one would have had to pick between two heavy metal outings, Soulfy at the Brick By Brick in Linda Vista or a local metal showcasing featuring top talent at The Merrow in Hillcrest.   Fortunately for me and the 50-plus others that decided to take the gamble on the locals, we were treated with delight to discover that the lineup was stacked with quality bands. The No Name Gang, a metalcore band based locally, headlined the night with support from Los Angeles hard rockers Void Vator, San Diego’s speed metallers Vanguard, and Long Beach grungers The Unit.

Kicking off the evening was Void Vator. Fronted by vocalist and guitarist Lucas Kanopa, a classic heavy hard rock band that has its varying sound of the metal classics with twin guitar harmonies, catchy riffs and choruses, and an incredibly clean, and sharp sound. The other guitarist Erik Kluiber (Ironaut and formerly of White Wizzard) traded solos and lead duties with Kanopa, and the pair left the audience in awe with their range of guitar ability. At one moment they would perform a legato but moving guitar solo, and at another, a shred that will leave you dead if you forget to breathe.   Their sound encapsulated everything you could think of in the traditional metal sense. A departure from the current, modern heavy vocal scene, the clean singing Kanopa towers over the other bandmates and exemplifies with charismatic passion his love for live performance. He excelled during their live set at fronting the four piece act during the opening spot on the bill, with many people filing in as they played. Even the other performers were inspired by the band’s uncanny ability to provide catchy, yet skillful riffage and melody.

I can probably speak for many in saying that the band did not have a dull moment in their set. The song after their opener, ‘Till It’s Gone’, took on a raspier approach with a riff reminiscent of ZZ Top. Kanopa then shreds for a brief moment, and then he and Kluiber are harmonizing with guitar leads. My personal favorite was the song ‘Time Has Come’, which contained everything that I personally enjoy in music. An opening riff perfect to lead into the chuggy riff to set up for an in your face classic rock chorus with sailing vocal lines. I particularly enjoyed the solo section, rife with trading guitar solos and lead in with sweet harmony.

The band closed out its set with the heavy metal crowd favorite, performing Iron Maiden’s ‘The Trooper’, a charming addition to their set to leave on a high note. Throughout the remainder of the evening, you would hear murmurs in the crowds about how well they had performed, and were definitely a gem in the lineup. One could say they easily stole the show before it had even began.

Next up was Vanguard. They certainly had a huge role to fill taking the stage after Void Vator’s encapsulating set. Vanguard, youthful in appearance, brought the audience with a heavy dose of flying speed metal attack. The band comprises of three brothers, Jesus, Christian, and Marcos Dominguez, on drums, lead guitar, and rhythms and vocals respectively. The band chugged hard with its opener, ‘Legion’, a high energy song chock full of thrash, shredding solos, and punk vocals. You could immediately hear a lot of early Metallica inspiration coming out of this song, especially during the chorus. The band typically leans on longer, drawn out solo sections in taking the bulk the running time in each song, with drawn out doubled riffs in and out of verses.   The song ‘Shock Therapy’ opened up with an evil sounding lead riff that eventually carried on when the drums came in with a droning groove to match the slower paced feel in comparison to the other songs. After about a minute and a half, the song turns into this high speed thrash chug with James Hetfield inspired vocals, flipping on its head an entirely different feel. One thing that the band has going for them is their lead guitarist Christian. He is incredibly talented and can really shred.   The band also covered Metallica’s ‘Creeping Death’. A lot of fans enjoyed this and you could see fists being raised and heads being banged as the band marched on. They closed out the evening with ‘Night of the Dead’, a slower paced tune that featured an opening solo section which Vanguard does so well.

I spoke with the band for a bit and they made mention that they will be recording some new material soon. They have been around for a few years, but the band is incredibly young and has a long road if they continue with their musical endeavors, in a good way. They definitely have the skill set to break out of the local metal scene, but must first polish their own sound and break the mold of the early Metallica. I enjoy watching this band perform, having seen them last year and they have grown so much since then. They are one to watch out for.

The headliner of the evening, The No Name Gang, changed the mood of the evening as their sound was a dramatic departure from the first two acts. They took the stage a little after 11 PM, and opened up with a modern, metalcore twist of heavy metal with heavier riffs, heavy vocals, and heavy attitude. Fronted by vocalist Justin Hendrick, this five-piece metalcore act is a local favorite in San Diego, and routinely has a pretty good draw whenever they perform. One thing that the band does well is moving in and out of choruses. They typically go straight into solo sections that are chock full of arpeggiated tapping and in your face shred. Guitar duties are handled well by Dana Roselli and John Haskins, both of death metal outfit Theosis. The rhythm section is rounded out by drummer Ryan L’heureux and bassist Zac Hariot.

I particularly enjoyed their songs ‘My Voice’ and the closing track, ‘Authority N/A’. Both are similar in writing style, having come from their debut EP, but those tunes really demonstrate their songwriting capability. ‘Authority N/A’ is arguably their strongest track, and opens with a much slower doubled guitar line, really setting the mood for what is to come later on in the song. It picks up speed at the right moments, and Hendrick is singing passionately in the microphone weaving in and out of heavy and clean vocal lines before the breakdown comes in and the room starts head-banging.

Their music is really dependent on a lot of guitar work. The harsh vocals complement the guitars and layers well with their overall sound. Often in their song structure, Hendrick will go clean vocals throughout the vocals, and when fitting, Haskins will round out a heavier portion of the song with his higher pitched scream. I can see why they are a local favorite. The band encompasses a heavy sound without the blazing speed of black metal, but also without the lyrical content of death metal. If you fancy heavier sounding music that has a strong metalcore orientation to it then you can certainly dig this live act.

Closing out the evening was grunge rock duo The Unit, a band freshly signed to Pavement Entertainment, and they completed their first major tour in promotion of their brand new studio release, ‘I Won’t Die’, and rounded out a couple of back to back San Diego shows. The female-fronted act certainly knows how to put on a great show, bringing their own lighting rig to offer another aesthetic to the two piece.

The drummer, Hutch Hostile, a hard hitting smashmouth rocker donned in suit and tie with joker makeup, and Sofi Savage, decked out in leather, rounded out the event with their grunge rock tone in similar style to a lot of the later grunge that had evolved into nu-metal. A lot of their tone is dependent on the low hum drone of Savage’s guitar work and vocal belting. Stylistically, they are incredibly original as a touring and performing act as a two piece, but they own it well and offer a fresh take in the underground grunge scene. The band is a non stop performance machine, that plays all over the west and mid-west, but their mark in San Diego has surely been made.

The heavily layered, simplistic guitar tone reminds me of the nu-metal acts that were pervasive in the mid to late ’90s, but instead of trying to incorporate cheesy and overplayed vocal styles and unoriginal guitar work, the band does what they do best – provide, simple, yet effective music that you can rock out to over some beers. Sofi Savage certainly has some pipes on her. A lot of the people that had remained to catch their set were impressed at her vocal ability, a unique sounding twist that draws you in with her emotional timbre.

All in all, a heavy Cinco De Mayo at The Merrow!