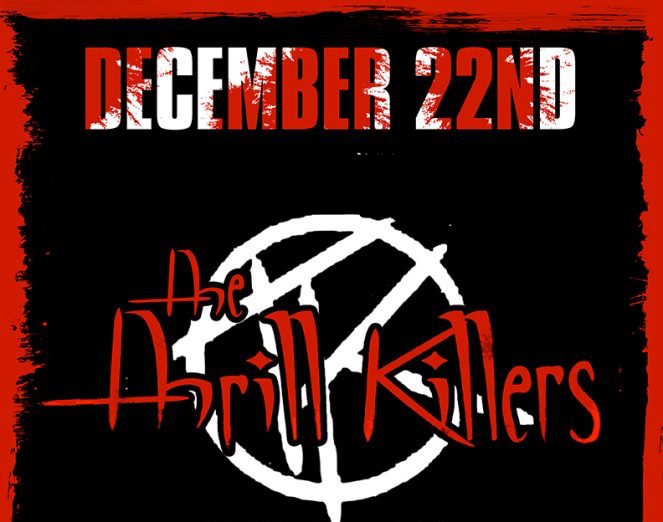 December 22nd 2016, West Hollywood CA: One of the most fantastic parts of living in Los Angeles that we all probably take for granted at one point or another is, even at the slowest times in the business, there is still a decent amount of highly entertaining live music to seek out. With the scent of pine as strong as ever, Christmas is definitely in the air this week, but I went out to West Hollywood to see The Thrill Killers headline their video release show that was recorded live. On Thursday December 22nd 2016, it was an eerie chill night, and again with the holidays coming up, LA became sort of a ghost town as the growing number of transplants take over the local population, therefore the turnout was on the low. The other bands on the roster this night unfortunately didn’t make the mark for me, although that is not to say they were lacking skill.

For my second viewing of a band I will continue to support on all future endeavors, The Thrill Killers came on as strong as ever and with their old-school style classic metal and punk with a pungent horror flavor, they put on a very entertaining show. Horror punk is a very fun and exciting genre that is often kept in the dark in this town, and I really hope it gains more momentum, as what’s not to love about a punk band that escapes the stigma of simplistic power-chord riffage and angst-filled vocals, and instead dives in to incorporate a classic rock and metal sound with quality humorous lyrics? Word-play fun, such as “we all need more brains”, kills two birds with one stone and hits the nail on the head, as to why we all do what we do? The smell of death, and the taste of flesh and brains is what we all need more of in our catchy punk rock and heavy metal. The passion is clear and the singer is obviously not a new kid on the block, yet he delivers the message as if he is believing it for the first time. He also has fantastic skills when it comes to accessorizing, as he wears a giant metal pot leaf chained necklace around his neck as his favorite bling. Tunes such as ‘ZFO’s (Zombies from Outer space)’ and the end to the night jam ‘Sex, Drugs, and ‘Rock N’ Roll’ serve up some fun and attitude that leaves a vibe of satisfaction on the crowd at hand. They are not your average band, and as I’ve said before, bands that mix odd genres or not-so-odd genres together in the best way possible really resonate in this modern world. That is what we are all after these days, bringing all the best eras and genres together in a new way that captures anyone’s heart who possesses one and kills the pain of everyday monotony.

The Thrill Killers really are one-of-a-kind on stage and stand out appropriately among anyone else they cross paths with. Crisp, clean, and clear vocals happen at all times, even when the heaviness comes in, and the biker metal and rock n’ roll style shines bright, while the guitars at times work in an intricate way similar to that of a thousand tiny metal gears grinding and working together to keep the perfect beat, time, and rhythm. While the members come together from varied backgrounds as well as locations, they always make their return to Los Angeles and are absolutely worth paying a visit to see them perform live.

An active band of six years, I had only discovered The Thrill Killers recently through another band Bag Of Humans with a shared guitarist, and I am excited to know of their existence. It is refreshing to know that for the amount of live metal I see, there are still constantly emerging bands that deserve a listen. Arrive at your favorite band’s show early and discover your new favorite band or not, but always keep the door open, because you never know what the breeze may fly in or what the cat may drag in and leave at your feet. As any masterful horror movie concludes, the villain gets axed and the hero gets promoted, and while new danger is always lingering, the main battle has been won and the chances of success next time have increased. Such adventures are just another day in the paradise of LA with the Thrill Killers, who do anything but murder the thrill of live music.