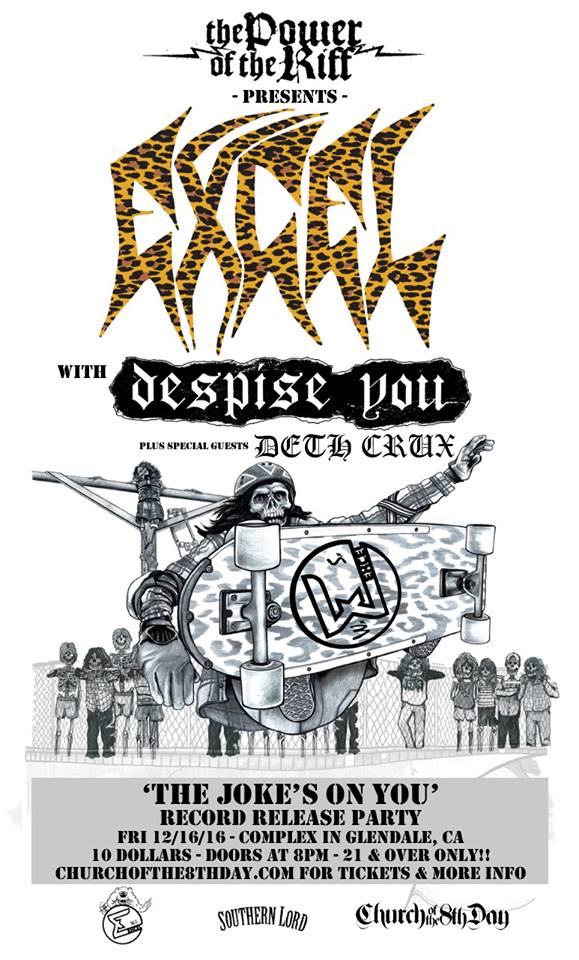 December 16th 2016, Complex, Glendale CA: Growing up in the east coast hardcore punk scene of the early nineties, I earned a few stripes on the subject and while a slightly different entity of crossover thrash punk bands definitely existed back in the day, they definitely matter in a big way in the year 2016 as the future is ours for the taking. Now that I have also earned my stripes as a full time west-coaster of thirteen plus years, I have become accustomed to some of the similarities and differences from coast to coast. On Friday December 16th 2016, I visited one of my favorite heavy metal venues, Complex in Glendale, for a special sold-out show, the official Power Of The Riff pre-party, headlined by Venice Beach locals Excel, who were celebrating the 2016 Southern Lord Records release of a remastered version of their 1989 album ‘The Joke’s On You’. Also on the bill was another hardcore punk crossover thrash band Despise You, with death rock openers Deth Crux, an event brought to us as always by Church Of The 8th Day.

Due to the chaos of my double life I was unable to arrive in time to catch the Deth Crux set, but having seen them at this same venue previously, I can only imagine they provided the same quality of entertainment with their uniquely death rockin’ gothic style.

As I entered the wall-to-wall packed venue that could have easily benefited by knocking out a wall or two on this occasion to make space for the chaos that ensued, I was thrown into the second song of the local LA band Despise You. There are a few traits worth mentioning here for better or for worse. First I was into the dirty-in-your-face-fuck-you-punk that was happening in front of me, then I started to notice the female vocalist, but only when she got in the way of another band member on the crowded stage or when the male main vocalist was silent and she yelled illegible words in his place. I will go no further other than to probably piss everyone off when I say she was an unnecessary nuisance that cheapened the act. The other aspect that ruined the otherwise fun angst vibe for me was the hit-you-over-the-head literals of the lyrics that were a mere cry from the real deal of Fear’s ‘I Don’t Care About You’ which they did an average cover of as well. I understand the simplicity and raw qualities that are hardcore and punk rock, and the concept and skill is evident in Despise You’s music and live show, but with its overkill, the essence gets lost in the execution. Lighten the load and get a little more creative with the lyrics in the chorus, and this band would levitate immediately. After the last song I went outside to breathe and my skirt levitated immediately from the insane gusts of wind that chilled off the night.

After the Marilyn Monroe moment ran its course of embarrassment, I dodged my way back inside to try to get a semi-decent visual of this early eighties crossover thrash band that blew all other punk bands I’d seen lately out of the water except for one, and that one was Iron Reagan. If these two bands went on tour together they would have the capabilities to destroy politics in a single bound. Excel has longer durations of songs and some tunes have that great crossover quality, where they can use much depth in the guitar riffs and even rock out with a fantastic bass solo midway through. The contradiction of the fast and simple styled lyrics and vocals mixed with more complex instrumentation is a wonderful contradiction and a solution to our suffering. Almost immediately after their take off into punk crossover land, the crowd surfing began and feet were flying through the air just as I remember some of my first adolescent visions of live mosh pits. From start to finish, and once again from old to older, Excel kept the audience’s eyes and ears locked to the stage in adoration and satisfaction. This was some very peaceful aggression to witness, and it is a wonder why this band is not bigger than they are, yet a sold-out show was a good indication that it was going to be a treat, and it was tenfold that. East coast punk crossover would not have had the fluidity that Excel seemed to carry through the hits. In a weird way it was the difference between punk rock for extreme change and punk rock with extreme change in the form of gold coins, with Excel being the latter. There were hints of similar flavor to that of Black Flag and old-school Anthrax, and with the complexities in the guitar it really commands a movement to the future. Well done but not overly intensified, Excel is a fantastic explosion of punk rock crossover.

Just when you think you’ve discovered it all, you realize there is another planet with another species and that species has even another planet with other inhabited species. Welcome to the world of hardcore punk, and friends, relax and enjoy the ride.