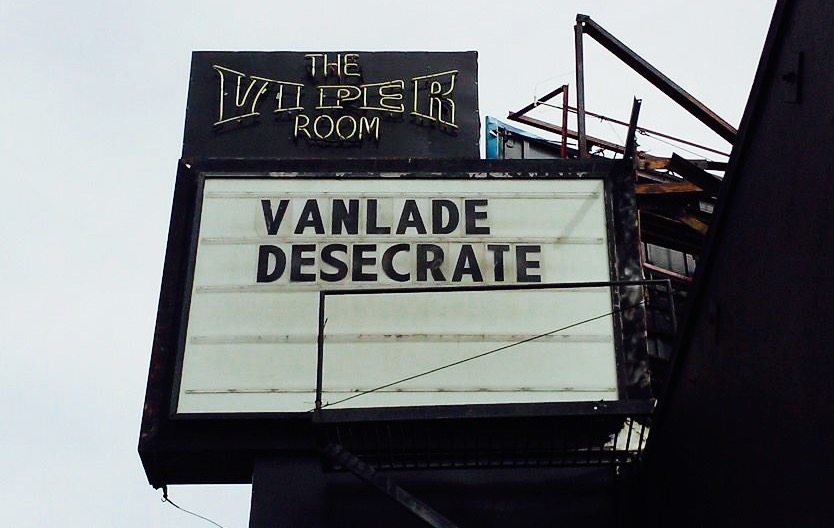 September 21st 2015, The Viper Room, West Hollywood CA: Kansas City speed/power metal quintet Vanlade are currently on a 12-day ‘Race On Earth’ tour, and made it to the Los Angeles area for a gig at the Viper Room in West Hollywood last Monday September 21 2015, sharing the stage with LA veterans Desecrate, who were celebrating their homecoming after a month-long US tour of their own. The show also featured local acts BrainDead, Enrot and Thorns Of Sin. I have never seen a show at The Viper Room where as many as five bands were put on the bill. Besides the prospect of the main focus of attention Vanlade’s heroic on-stage exploits and the local supporting lineup, Viper Room regulars approached the show with heightened curiosity to discover whether or not a five-band lineup would work at this venue.

Doors opened before 8, which is the earliest they’ve probably ever been opened here, and at 8 o’ clock, Thorns Of Sin began proceedings with a supreme exhibition of melodic extreme metal. The size and shape of the stage seemed to fit them perfectly, and they utilized the sound system to fill the room as well as any of the other bands that played this gig. Led by frontman and sole songwriter Sergio Varela, Thorns Of Sin showed improvement and sounded more cohesive and powerful in comparison to their most recent Los Angeles area performance at Loaded Hollywood a mere two weeks ago, which was an impressive set in itself. Even so ridiculously early in the evening, they attracted a decent turnout which only strengthened as their set progressed. Thorns Of Sin are actively going about their mission of developing a local fan-base and succeeding at doing so. This set deems them worthy of much higher billing the next time they take a stage in the area.

Next up were Enrot, playing a 30-minute set of Pantera/DevilDriver inspired thrash/groove metal. This is what they seem to do best, but they’ve been doing it for a while, and one gets a feeling that the musicians in this band are capable of something more than just being one among thousands of similar-sounding Pantera-worship bands. Plus, they’ve done too many local shows recently and their progress has stagnated as a result, as their burned out fan-base is turning up in lesser numbers. But the bottom line is, they need to inject something into their music that would make them a little more distinct.

Next on stage was punk/thrash band BrainDead, playing this show despite recently parting ways with their vocalist, as twins Adam Axe on guitar and Rez Peterson on bass ventured to handle all the vocal duties between them. The departed singer definitely brought the punk element with his personality and vocal delivery. Adam and Rez’ vocals make this version of BrainDead more thrash than punk, which is why their cover of Overkill’s ‘Fuck You’ was a suitable selection for this set. The vocals are far from a finished product at this point, but if they decide to continue with this setup they will get better at it. It also hindered their playing to some extent, which is another thing they’ll get more used to with sheer practice. That said, they more than compensated for any potential shortcomings with highly entertaining stage banter between songs, and they were the funniest band of the entire show without doubt. Overall, it was a brave effort from BrainDead, and more than anything, they showed that they can pull it off as a three-piece.

Playing second last but clearly in the headline spot with a start time of 11 PM, Desecrate began their set as per schedule, and despite the burnout from the past month of road-dogging across the nation in a van, they managed to put in a solid performance here. They stuck to a set dominated by material from their 2015 full-length release ‘Of Death And Damnation’, as they should, because it’s by far their strongest piece of work. It’s good to note that they finally broke out of the local scene and did a nationwide tour, investing the effort to put in the hard yards and attempting to build a following outside of Los Angeles. But locally, they’ve been restricted to Loaded, Whisky, Viper Room and Troubadour for the longest time now, and it’s perhaps time for them to spread out a little more because the Los Angeles metal community extends far beyond Hollywood/West Hollywood.

And lastly at midnight, Kansas City quintet Vanlade hit the stage for a delightfully righteous presentation of all that is glorious about heavy metal, the high clean singing, the ripping guitar solos, the fist-raising vocal choruses and guitar harmonies, the galloping rhythms, the denim and leather, and most importantly, the cheesy lyrics. Vanlade have been a band for nearly a decade with two full-length albums to their name, and they showed that they are no newbies in terms of musicianship, performance and stage presence. They satiated the needs of the true heavy metal diehards in the audience, of which there werne’t many, because in typical Hollywood style, local attendees came to see their buddies’ band and exited the venue, as did most of the musicians in these other bands, which looked even more pathetic given the fact that the members of Vanlade themselves made their presence felt by being in or near the front row for all four bands they shared this stage with. Desecrate were the clear headliner with their local following, but Vanlade were the touring band and deserved a larger audience and should have been placed second last in the lineup instead of being reduced to the ‘closing act’ of the evening. Regardless, they showed real class and professionalism and didn’t let anything deter them, delivering a splendid show for those that cared to stay. The song ‘Hail The Protector’ was the highlight of their set, but there wasn’t a single dull moment. And what’s more Kansas than a band from Kansas City (Kansas, not Missouri) playing a metalized cover of Kansas’ ‘Carry On Wayward Son’? Vanlade were the best band of the lineup, by a long distance. This show failed to treat them right, and one hopes that it won’t affect their decision to return to Los Angeles on their next tour.

And now back to the original question on my mind before even stepping into this show. Yes, five bands was undoubtedly too many for a Viper Room gig. I come here a lot and I’ve never seen a show here with more than four bands, which is clearly for a good reason, as proved by the unnecessary length of this gig. The 30-minute changeoever between bands is quite normal here and people are used to it, but it adds up to two hours of dead time when there are five bands involved. Plus, as mentioned earlier, the opening band ends up playing too early and the last band gets on too late. Three-band shows here are perfect, and four-band shows are great if every band on the lineup is strong. Any more than that is a red flag in my opinion and this venue should never do a five/five-plus band show again.

Overall, a strangely fascinating evening, for reasons positive and negative, thanks to the efforts of the four hometown bands and the great travelers from Kansas City.