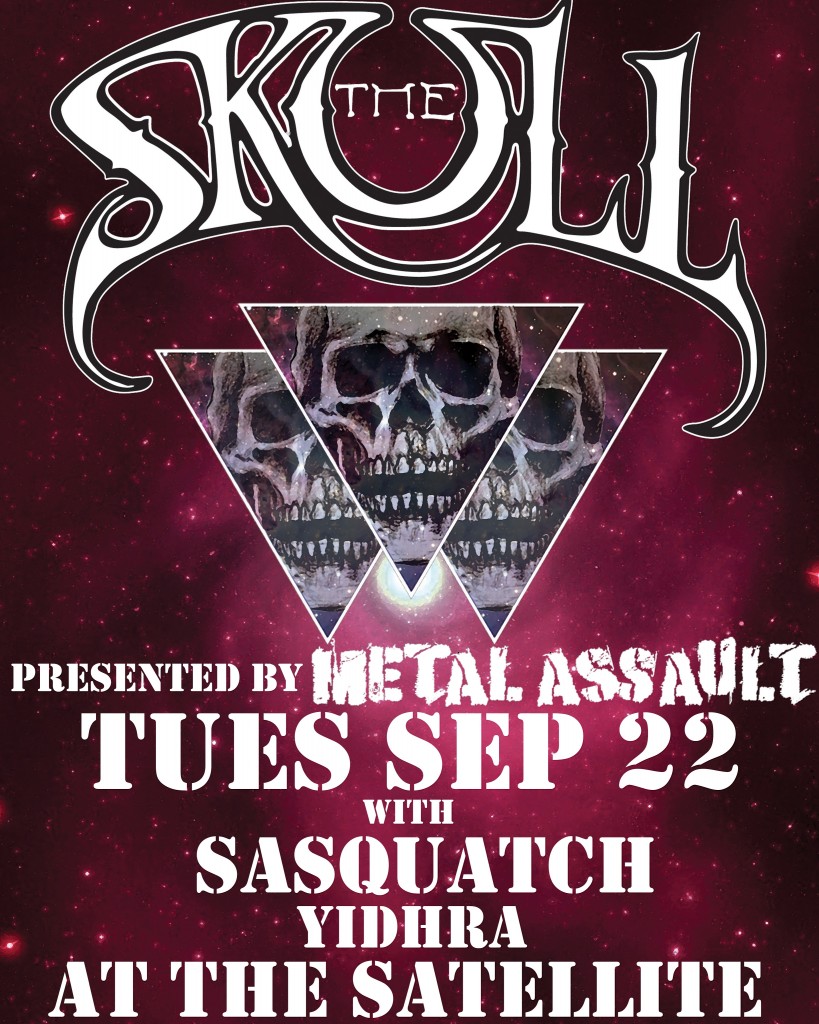 September 22nd 2015, The Satellite, Los Angeles CA: Chicago doom metal group The Skull, featuring Trouble members Eric Wagner and Ron Holzner in its five-piece lineup, formed in 2012 as a continuation and rebirth of everything that Trouble stood for, but aside from performing Trouble classics, The Skull worked on their own original material, and as a result, released a full-length debut album called ‘For Those Which Are Asleep’ in October 2014 via Tee Pee Records. The record not only turned out to be the finest representation of the genre to have surfaced in a long time, but also proved the relevance of The Skull beyond being a mere nostalgia act. In the midst of a US headline tour, The Skull arrived at the Satellite in Silver Lake, for their first Los Angeles area show in nearly two years. The gig also featured Sasquatch and Yidhra as opening acts, and LA’s underground community was expected to turn up in good numbers to support the event, even on a Tuesday night.

Doors opened at around 8:45, and at 9:20, stoner doom quartet Yidhra started the show with an incredibly powerful set that pleasantly surprised first-timers that had turned up early enough to witness the entire lineup. Vocalist Ted Venemann fronted Yidhra with excellent vocal delivery, theremin play and commanding stage presence, and his band mates kept it heavy and doomy. The lighting was appropriately minimal for the duration of Yidhra’s set, and the visuals projected in the backdrop went well with the lyrical themes of the tunes being played. Yidhra’s newest compositions came across as highly impressive, as did their older tunes such as ‘Witch Queen’. They’ve been around since 2008 and their only full-length ‘Hexed’ came out in 2013, so they are definitely due for a new release. As Venemann remarked himself after the set, the quality of the sound here at the Satellite was absolutely fantastic for Yidhra and for the entire show, to the extent that said he could hear himself just as well on stage as he did when he jumped off of it during one of the songs. Yidhra provided the ideal warm-up for the bands to follow. ‘More theremin!’ was the verdict.

Shortly after, Sasquatch made a rare Los Angeles live appearance with their brand of doom-infused rock ‘n roll and slotted in perfectly between Yidhra and The Skull, as they were less on the doom side in comparison to the other two bands, and relied heavily on fuzz instead. Keith Gibbs on guitar and vocals, (new Behold! The Monolith bassist) Jason Casanova on bass and Rick Ferrante on drums put their heads down and jammed away relentlessly for 30 straight minutes, hitting the audience with a sonically fuzzalicious set. Their live shows in the LA area are few and far between, so for attendees here to see The Skull, Sasquatch’s performance was an added bonus.

The atmosphere inside the Satellite was great, everyone was in good spirits, and by the time The Skull took the stage at around 11:20, this place was ready for them. Attendees flocked closer to the stage, and The Skull delivered a hefty dosage of classic doom, in a set dominated by Trouble classics but also including five tunes off of ‘For Those Which Are Asleep’. Eric Wagner, Ron Holzner and their band mates went about their task flawlessly and with effortless ease, focusing on nothing but sonic perfection on each and every item of the set. The Trouble selections got the old-schoolers in the crowd understandably excited, but this set proved that The Skull’s original tunes are by no means inferior to anything Trouble in their quality and power. It’s where this gig differed from the band’s previous LA area appearance at Loaded Hollywood on October 19 2013, as on that occasion they played only Trouble songs. The Skull’s own tunes such as ‘Trapped Inside My Mind’, ‘The Touch Of Reality’, ‘A New Generation’ and ‘Till The Sun Turns Black’ decorated the set brilliantly and were apted positioned at regular intervals. Songs like ‘The Door’, ‘Sick Of It All’ and ‘Send Judas Down’, which were omitted, are just as incredible if not more, and should be part of the set list. But the single most memorable highlight of this show was The Skull’s righteous rendition of the greatest doom composition of the 21st century, the title track of ‘For Those Which Are Asleep’, played at a slowed-down pace which heightened the impact of every single note even further.

Eric Wagner carried a hilarious demeanor while talking to the audience between songs, and although he didn’t smoke out the entire room like he did at Loaded, he was handed a pipe and lighter and immediately accepted the offer. At one point he ridiculed someone requesting for a song that had already been played, saying the dude had probably smoked too much weed. His vocal delivery in 2015 is just as simple, clean and strong as it ever has been, which bodes well for The Skull’s future.

Witnessing this performance by The Skull in a club like the Satellite, which made for the best possible setting, felt like the real classic doom metal experience, and not only treated younger members of the audience to a throwback of what it would have been like to see bands like Black Sabbath and Trouble in small clubs back in the day, but also convinced this writer that stoner doom belongs in clubs and small indoor venues, not arenas.

The Skull orchestrated the finest and most definitive representation of doom Los Angeles has experienced in recent times, outdoing their own previous efforts, and setting the standard for everyone else. Through the combined efforts of The Skull, Sasquatch and Yidhra, this was overall an extremely pleasant outing for the LA underground faithful which returned the favor to the show with a sizable turnout and great response to all three bands, and fans are already looking forward to The Skull’s return to the area, hopefully with more original material.

For full video coverage of the show, check out Arturo Gallegos’ YouTube channel.