April 30th 2015, The Whisky-A-Go-Go, West Hollywood CA: Having undergone a period of forced exile since their 2013 North American tour with Kreator and Overkill and the following European tour with Iced Earth, Southern California thrash tyrants Warbringer have returned with a revamped lineup and a new album in the works. Touring relentlessly for five years prior to the hiatus and releasing four excellent studio albums in the process, they developed a fan-base from the ground up and always played with the right bands. Still led by vocalist John Kevill and featuring original member Adam Carroll on guitar, Warbringer stepped foot on a stage in Los Angeles for the first time in nearly two years for a gig at the Whisky-A-Go-Go last night, heading a lineup that included LA shred kings Exmortus and longstanding metal quartet Desecrate, among others.

Desecrate hit the stage at 9 PM and played a well-received 25-minute set, presenting material from their strong new release ‘Of Death And Damnation’ and an older tune or two, and in fact the song ‘Power Trip’ off of their 2012 album ‘At The Edge Of Sanity’ garnered the best response, as its crossover punk/thrash element suited this young crowd to perfection. It was positively interesting to witness Desecrate play to an all-ages, largely under-21 audience for a change, a fresh repreive from their usual 21+ shows at places like Loaded, Viper Room and Troubadour (which is an all-ages venue but generally draws a 21+ crowd). The difference in energy level was clearly noticeable. It was unfortunate that their set wasn’t longer, and in all fairness, they should have been placed third from the top on this bill, above Ophiuchus.

At 10:20, Exmortus turned up the heat in a already baking hot Whisky-A-Go-Go with a typically mind-blowing 35-minute set boasting the best of their ‘Slave To The Sword’ album, but in addition, much to the delight of their longtime fans, a brand new tune called ‘The Hymn Of Hate’. On first listen, this composition seems to capture all the extremities of Exmortus’ music, and is high on the shred, so much so that it would serve as an ideal soundtrack for a video game or something of that nature. Fresh off of their high-profile appearance at the Honda Center in Anaheim as the opening act for an LA KISS arena football game, Exmortus proved to be the best-case scenario as main support for Warbringer here, and based on the small taste of their new material, there is much to look forward to. 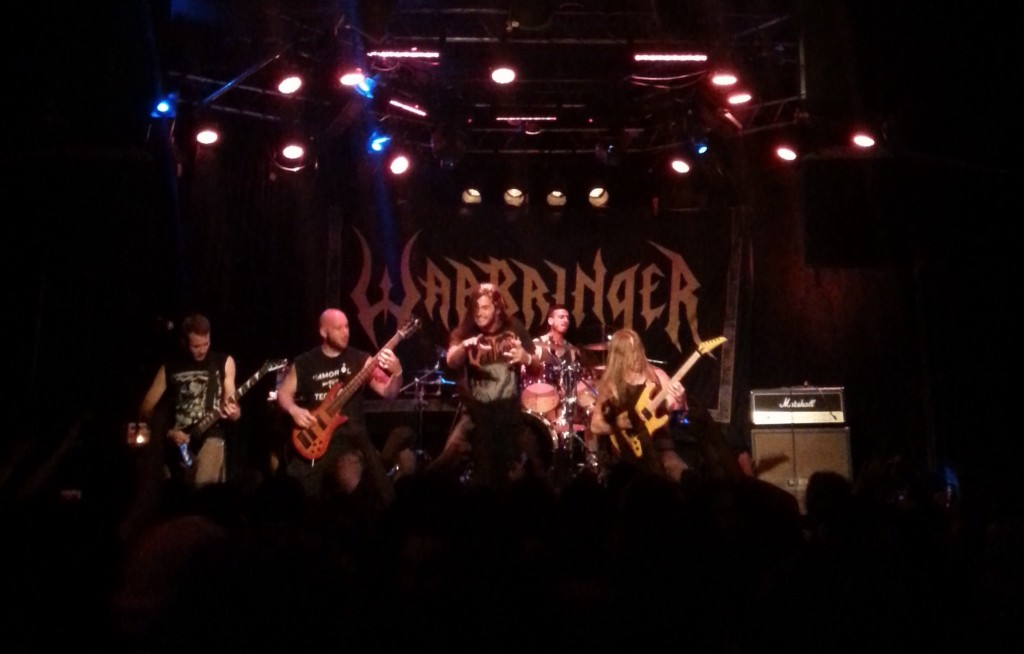 A few minutes past 11 PM, Warbringer appeared on stage in front of a packed house at the Whisky. A majority of this crowd was under 21 and as a result were compelled to stay inside the confines of the building upon entering it. Having raged and moshed for the opening acts, these thrashers still had plenty of energy and enthusiasm left in them and gave it all to Warbringer throughout the band’s scorching 60-minute set. The manner in which the audience responded to songs from the first two albums ‘War Without End’ and ‘Waking Into Nightmares’, they seemed nothing short of thrash anthems. Warbringer delved really deep into their arsenal to unleash a deadly assortment of familiar as well as hidden weapons such as ‘Forgotten Dead’ which had never been performed on stage before. The first half of the set was dominated by tunes off of the two most recent albums ‘IV: Empires Collapse’ and ‘Worlds Torn Asunder’, but the show came to an unabatedly intense end with a three-pronged old-school onslaught of ‘Total War’, ‘Living In A Whirlwind’ and ‘Combat Shock’, circle pits rolling at their fastest and expanding to their largest size, bodies surfing atop and a few even venturing to indulge in the srictly forbidden act of stage-diving.

John Kevill was in his element, giving the impression that he was raring to play this show for quite a while. Not that this audience needed it, but he instigated numerous circle pits and orchestrated a wall of death at the very end. His band mates played their parts solidly, and this group of guys had clearly practiced long and hard to prepare for this gig. Warbringer have genuinely been a standout amongst young thrash bands that surfaced over the past ten years. With age still very much on their side, the rush they must have felt from the incredible response they got at this gig has hopefully rejuvenated their desire to capture the imagination of audiences worldwide all over again. Thrash needs Warbringer to be alive.