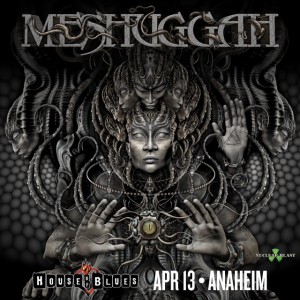 April l3th 2015, House Of Blues, Anaheim CA: Swedish progressive extreme metal giants Meshuggah released their latest studio album in 2012 and carried out a massively successful 25th anniversary tour in 2014. So, they had no reason to return to Southern California this April, but since they were scheduled to be in the States for a one-off appearance at Kirk Hammett’s Fear FestEvil in San Jose, they announced a gig at the House Of Blues Anaheim as part of this super-brief run. Los Angeles thrash tyrants Warbringer were supposed to be the sole opening act for this event, but due to their lyrical content being deemed too ‘evil’ by Disney, they were replaced at the last minute by local prog luminaries Intronaut. As it turned out, the combined musical onslaught of Meshuggah and Intronaut satisfied a packed House Of Blues Anaheim to the fullest.

A day before entering the studio to record their as-yet-untitled fifth full-length album with producer Josh Newell (Cynic) and Devin Townsend on the mixing console, Intronaut played a 45-minute set here and made it a truly special, exclusive occurrence for attendees. Sandwiched between two older songs that began and ended the set, they presented four brand new tunes in instrumental form, as guitarist/vocalist Sacha Dunable pointed out that the vocals for the new jams hadn’t been worked out yet. The next time they step on a stage they will most likely have vocals on these, so Intronaut fans in the audience genuinely felt fortunate to be able to experience the band’s new material in its purest incarnation.

Every time Intronaut convinces listeners that they might have hit their peak as songwriters and performers, they go on and outdo their own previous efforts. The same is the case with their brand new creations which take their progressive tendencies to unchartered extremes, encompassing an incredible degree of diversity within itself, ranging from the heaviest to the most psychedelic. The impact of their music is undoubtedly amplified live which showcases the four members’ expertise on their respective instruments. Sacha Dunable and Dave Timnick hold the forefront on guitars and vocals, meanwhile Danny Walker on drums and Joe Lester on bass (as well as with his endlessly oscillating head) embody the rhythm. Even though they were playing to the backdrop of Meshuggah’s artwork and in front of a crowd that was very much here solely for the headline act, in this writer’s completely honest opinion Intronaut stole this show, and if ever there were to be a scenario where Intronaut and Meshuggah were playing their own separate shows on the same night in town, Intronaut would be chosen within the blink of an eye. 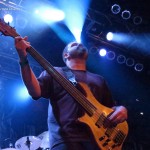 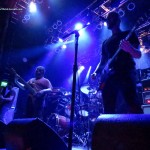 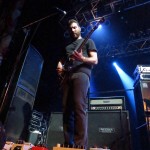 At 9:15, the lights went out and following a long intro which was accompanied by chants of their name from this packed house, Meshuggah stepped onto the stage and put forth a 90-minute set that due to its combination of heavy music and even heavier lighting patterns, resembled an extended blinding nuclear explosion. They presented a well-rounded and comprehensive compilation of material from their revered discography, and the first few notes of every one of the 14 songs they played were greeted with loud cheers that proved that the fans clearly knew and loved all items included in the set.

The lighting rig occupied the entirety of the stage’s width and was placed in the background on either side of the drum kit. The lights were nothing short of an additional instrument that went in sync with Meshuggah’s vocals, guitars, bass and drums, as the usage and variation of lighting patterns was constant throughout the performance. I moved around between various vantage points during the 90 minutes, and it was interesting to observe that the volume level of Meshuggah’s set was definitely nowhere near as high as what I’ve experienced for other shows at this venue in the past. I took out my earplugs which I almost never do. But other than that, this Meshuggah set gave the fans everything they could have asked for, as the general admission floor was bouncing the entire time.

An evening of heavy music punctuated by genuine feelings of sensory overload. 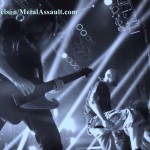