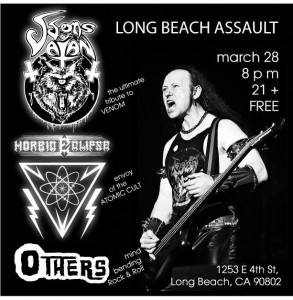 The venue, conveniently located a few blocks off of Long Beach Blvd, was easy to find, and rather too easy to enter into, as there was no security staff for I.D. check at the entrance despite it being open only to folks aged 21 and over. There was no actual stage and the bands had to set up their equipment on the floor itself. But the venue’s layout lent the show an intimate D.I.Y. vibe, which suited these three bands to perfection.

A few minutes prior to 10 o’ clock, Others began their 30-minute set, fresh off of two gigs they played in West Hollywood within the last two weeks and definitely in the groove as far as their live performance level was concerned. Technical issues aside, they put forth a compelling set, the song ‘Into The Trance’ once again standing out for its smooth transitions between Doors-like slow psychedelia and Motörhead-esque fast rock ‘n roll. Through each of the three bands on the bill, this evening was only going to get heavier, and Others were ideal in preparing people for the onslaught to follow.

Shortly after, the neon-lit beer signs were killed, and the Morbid Eclipse stage production with the floor-mounted lighting panels, fog machine and laser beam projector was in place. What ensued over the next 30 minutes could be described as a sensory overload of epic proportions, as sonic carnage met visual captivation. The lighting at this venue was basically non-existent, but Morbid Eclipse turned out to be the only band visible during their set because of their own production (and hence the only band I was able to photograph with my low-quality equipment). They floored everyone in attendance and were rightly asked for an encore. Solid songwriting, high-class gear and intense live performance to go with a cleverly hilarious visual and lyrical theme. These are only a few of the traits possessed by this band, more of which become evident with every repeated viewing of their live show. Morbid Eclipse is rapidly rising to the pinnacle of extreme metal. Metal magazines and blogs of this planet, I am looking at you and counting on you to stop wasting time and ink on overrated, over-exposed and washed-up rockstars and instead shed some light on this clearly newsworthy band from outer space. 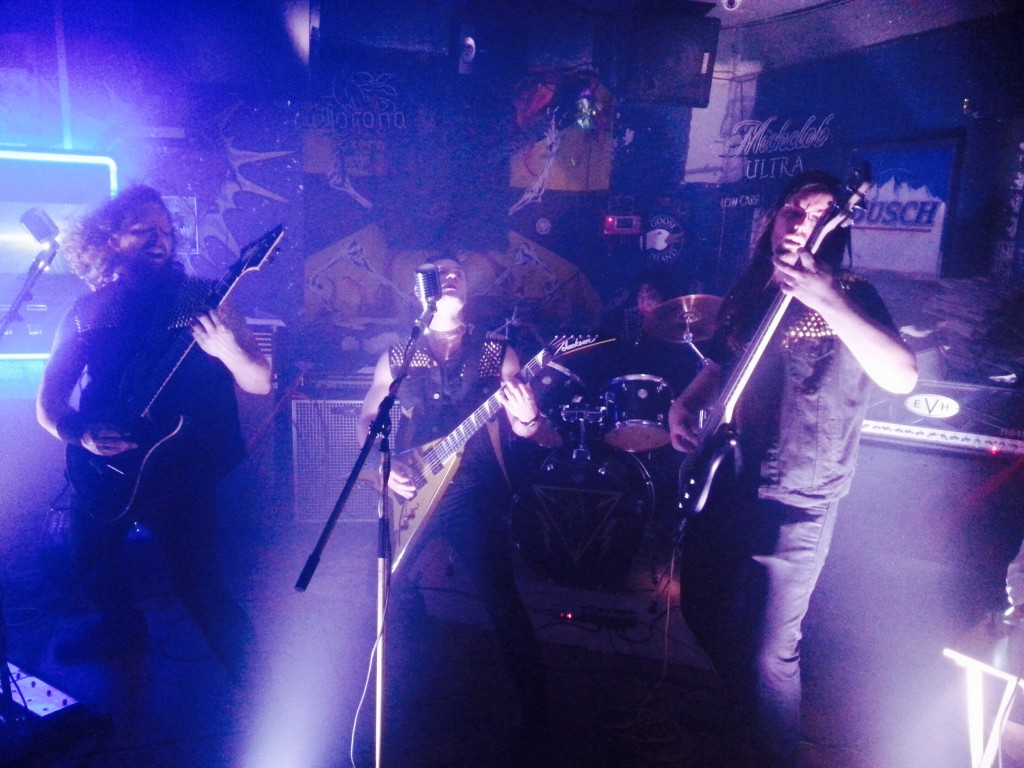 “We are Sons Of Satan, and so are you!” yelled vocalist/bassist Menno Verbaten, as the Venom tribute trio called Sons Of Satan, also featuring Matt Price (Behold! The Monolith) on guitar and Rhett ‘Thorgrimm’ Davis (Gravehill) on drums, began their mission of turning this place into an altar of black ‘n roll worship. Menno Verbaten, already firmly established as an incredible performer in LA black metal band Lightning Swords Of Death and an exemplary portrayer of the Cliff Burton role in early-era Metallica tribute act Cliff ‘Em All, channeled his inner Cronos to perfection and played the part so naturally that it seemed he’d been doing it for as long as the legendary Venom frontman himself, and one cannot imagine it being done any better. By his side, Matt Price, the master of tonality and skull-crushing heaviness, nailed the guitar parts with effortless ease, as did Thorgrimm behind the drum kit. The performing area remained in near-complete darkness throughout the set, which actually befitted the vibe of the music and enhanced the atmosphere. There are far too many tribute acts for certain old bands that no one needs to hear over and over again week in week out, and it’s refreshing to finally welcome with open arms a truly amazing Venom tribute band.