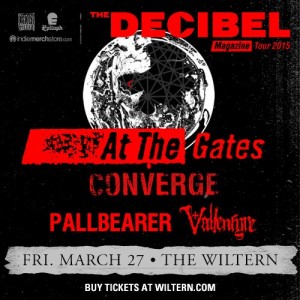 March 27th 2015, The Wiltern, Los Angeles CA: Over the course of our lives, a number of bands change the landscape forever in music. Throughout all genres, one influences another, so on and so forth, opening the Pandora’s Box to a wide variety of life-changing artists. Sweden’s At the Gates has done just that for melodic death metal, with not only changing our perception of the genre, but even including influencing other commercial forms of modern music today. Their legendary mark on the metal world started 25 years ago, and 7 years after their US tour, they’ve returned to the States alongside death/doomers Vallenfyre, rising band Pallbearer and long time hardcore punk/metal standouts Converge. This incredible evening could not have come sooner, and every moment leading to At the Gates was to be savored.

Doors opened at 6 to an already fairly crowded metal bunch, eagerly awaiting the unfolding of greatness upon dusk. To start off the very first day of this tour, Vallenfyre set foot on The Wiltern stage right at 7 PM. Almost a “supergroup”, consisting of members of My Dying Bride and including the lead guitarist of Paradise Lost, Gregor Mackintosh, who happened to be on vocals for Vallenfyre as well. Much like their own band’s contemporaries, Vallenfyre played a blistering heavy style of slow death metal with plenty of Doom influences to back it up. I wondered how this crowd, mainly consisting of melodic death metal and crossover/metalcore fans would react to them, and there were no worries, as Vallenfyre certainly warmed up the crowd, playing much of their 2014 record ‘Splinters’. Mackintosh’s vocals were certainly up to par, coherent and with a lot of beef. While their melodies throughout the slow droning riffs were headbangable, their rare moments of intensity and blasting really showed off their power and sonic variations. For not hearing a note before tonight, their 30-minute set was impressive, considering how hard it is to do doom/death Metal correctly these days. Vallenfyre were definitely a welcome addition for this tour.

Right on schedule, and the floor was filling up fast at this point, Pallbearer took the stage at 7:45 PM, to what it seemed to be much more fans of Pallbearer than I anticipated earlier. Having seen them open for Enslaved at the Troubadour in January 2013 to a sold-out crowd, I was thrilled for them to be on an even bigger tour. Unlike Vallenfyre, Pallbearer stays on the more drone-like style of doom metal, incorporating a booming set of riffs with agonizing vocals to go with. Coming off their most recent and quite successful album ‘Foundations of Burden’, having “Foundations” make its way to their powerful but short set was a nice touch. Their newest single, only a month old, “Fear and Fury” was played in addition, still quite new to everyone but well enjoyed. I’m normally picky about various types of doom metal, and while I do prefer the more My Dying Bride/November’s Doom style, Pallbearer’s drastically pounding live sett will grip you by the throat and not let go. They continue to make strides in the doom metal genre.

By this point, the entire pit was completely jammed in with many ladies and gentlemen withstanding, and the rest of the floor packed to the gills. Keeping the time record intact, Converge opened their set with “Eagles Become Vultures” right at 8:30 to a fairly responsive crowd. Scouting through the venue, there were plenty of Converge and other hardcore/metalcore shirts all around, thus indicating Converge’s longtime status still holding true to their fans. Starting the same year as At the Gates, Converge paved influences for many crossover bands. Longtime and co-founding member and vocalist Jacob Bannon, stayed frenetic and moved throughout the stage constantly. At his command, he demanded pits, and through each section of the Wiltern, there weas at least one, keeping the crossover fans doing what they love to do. Co-founder and guitarist Kurt Ballou never let up the 90s style of punk and metalcore riffing, often joining Bannon to rile up the crowd even further. Their earlier work seemed to resonate further with me, as it kept a somewhat gritty and even grungy edge. Such evidence was in their last song “Concubine”, famous from their critically acclaimed 2001 release Jane Doe, in which the crowd let out one last roar of approval for the song. The amount of thrash-influenced hardcore traced in the song was almost impossible to overlook, and really took me aside to show me how the genre was perceived and noticed at that time. Although their 45-minute set still didn’t blow me away, Converge did exceed my expectations more than I thought they would intially, and their fans who came in numbers for this show, enjoyed every minute of it. 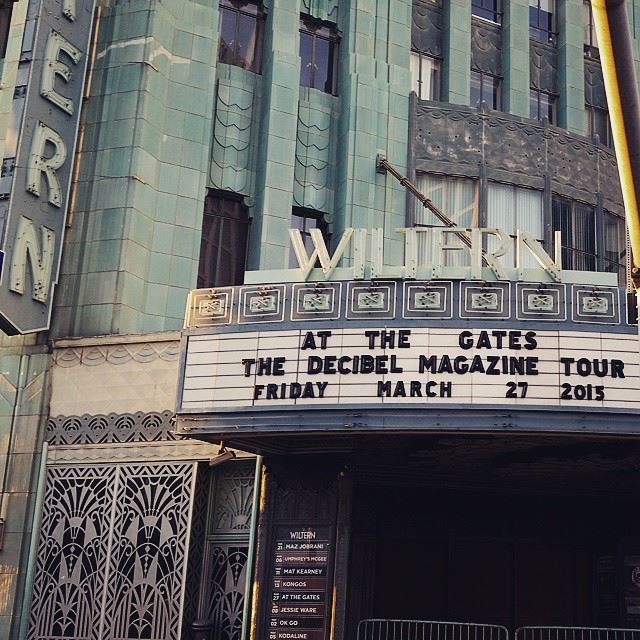 To say there was “magic” in the air at this point of the evening would truly be an understatement. Memories instantly came back to me from their last Southern California appearance, heading all the back to July 2008, sold out at the Music Box (Now known as the Henry Fonda theater). And still to this very day, the most violent mosh pit I have ever witnessed. It would truly be insulting to compare and expect the same type of show, but I knew that the bar would certainly be at the same, or even possibly better. And props to The Wiltern for keeping the time perfectly through all the bands, as At the Gates intro tape went down at 9:45 PM, who were welcomed with cheers, shocked faces and horns in the air throughout the venue. Opening from their first album in nearly 20 years, ‘At War With Reality’, “Death and the Labyrinth” got the show going. And although the sound was a tad rough, it was certainly fixed as “Slaughter of the Soul” was immediately played. Anyone who knows this band knows that as soon as that monstrous opening riff sets in, and it was unbelievably awesome to see everyone around me time it JUST right with their bodies and faces, as frontman Tomas Lindberg screams, “GO!!!” in which absolute chaos, mayhem and carnage broke loose. This wasn’t just nostalgia that you hear on the radio and acknowledge, this was from the 1995 release Slaughter of the Soul, the record that truly defined Gotherburg melodic death metal, as well as influence many other acts, such as Trivium, Coal Chamber, and every single Metalcore band out there. If any of them denied At the Gates was an influence, deem them liars.

Although the new record was perceived mixed amongst my friends and peers, I did happen to enjoy it more than I was proceeding to, as 6 songs were played off it this evening. But let me make myself clear in which how the reactions went from the new material being played, and anything else they did. Every record was recognized, including the title track from the EP/album Terminal Spirit Disease, in which the only normal reaction of hearing it was to go ballistic in any shape or form you desired to. The highlights reigned above and beyond, “Raped by the Light of Christ” from their sophomore release With Fear I Kiss the Burning The Darkness, “Nausea”, but nothing could prepare me for hearing “Windows” from what I consider to be their greatest record, The Red in the Sky is Ours. Upon hearing that captivating intro, to which I’m still getting chills writing this, left me completely paralyzed in amazement and admiring true beauty. The Bjorler twins, Jonas on Bass and Anders on guitar alongside Martin Larsson, delivering the middle bridge riff that I still hold to be one of the brightest and most gorgeous melodies I have heard, mixed my emotions through joy, awe and metal rage. Every member was as tight musically as they were seeing them 7 years previous. Adrian Erlandsson’s double bass sound and attack echoed powerfully through the PA speakers, enhancing the delicate yet ferocious riffing even greater. Time seemed to fly by, as their 80-minute set ended with a triple song encore. “Blinded by Fear” and “Kingdom Gone” had everyone losing their minds and screaming their voices to deterioration. One minor flaw that needs to be said, was having “The Night Eternal” from At War with Reality, as the very last song. In no ways a negative track, in fact, the ending sequence is rather doomy and catchy as well. But having this song in the regular set and swapping it with an older song would have had it be done much further justice. Simply noticing the reactions from the new album to everything else, it was quite obvious in wishing that decision was made. Nonetheless, a rather small flaw in otherwise an incredible and magical performance.

Throughout the years, we are very fortunate to have these moneumental legends grace our ears, hearts, minds, and our deepest cores. Make no mistake, At the Gates reminded everyone new and to the ones in the beginning, why their unmistakable trademark of Swedish and universal melodic death metal have been critically acclaimed for over 25 years and counting. Consider every show they play to may being their last, and do not miss your chance to witness metal history personified.