August 6th 2014, Pacific Amphitheatre @ OC Fair, Costa Mesa CA: Back in the late 60s and early 70s, long before heavy metal was defined the way it is today, Deep Purple became the quintessential heavy metal band, writing music that was undeniably heavy but firmly rooted in bluesy rock ‘n roll. They not only went on to formulate a legendary career for themselves but along their journey they influenced a ton of younger bands, paving the metal genre in the process. Today in 2014, a whopping 45 years after they formed in England, they’re still soldiering on, and have been on a touring run following the 2013 release of their 19th studio album ‘Now What?!’ Currently they’re trekking North America, and played at the Pacific Amphitheatre as part of this tour, in the final week of the 2014 OC Fair along with American rock veterans Blue Oyster Cult as support act. 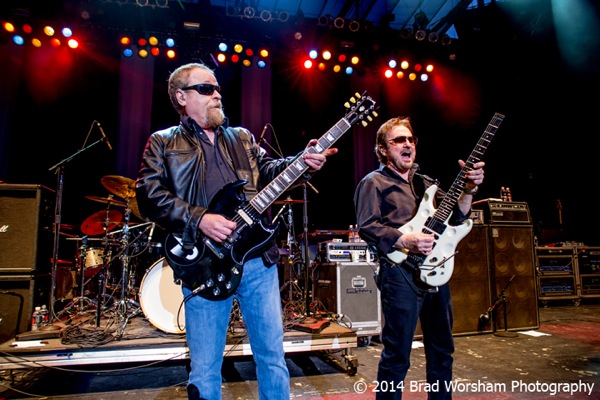 Doors opened at 7 PM and ticket holders flocked in to fill the lovely and intimate Pacific Amphitheatre to its 8500 seated capacity. With the pleasant chill of the typical Orange County summer evening in the air, the concert began promptly at 7:45 with Blue Oyster Cult taking the stage for a 45-minute set comprising a handful of their greatest hits and then some. They eased into the set with the 1973 tune ‘The Red And The Black’ and turned it up a notch with ‘Burnin’ For You’ and ‘Buck’s Boogie’. They included solos and jams amidst the six songs in the set, and in my opinion there was a bit too much of it, considering they were an opening act here. The crowd went nuts for ‘Godzilla’ even though I never cared for the song to be honest, but with that said, the dude with the dinosaur mask dancing around in front of me was entertaining. The biggest disappointment though was BOC’s rendition of ‘(Don’t Fear) The Reaper’. This being my first time seeing a proper BOC electric live set I was obviously expecting this song to have a magical impact but it failed to do so, mainly due to the lack of grip in Eric Bloom and Buck Dharma’s vocals. The power of the song is in its vocals and without that there’s not much redeemable about it. Nonetheless, it was overall a solid albeit not mind-blowing performance by Blue Oyster Cult. 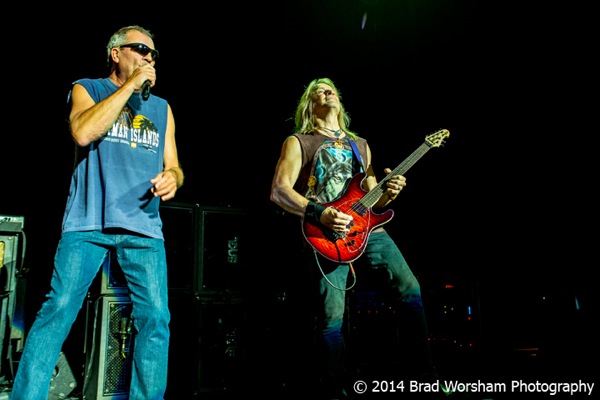 During the intermission I was tripping out on how tiny the Deep Purple drum kit looked on that stage floor, and was wondering why a riser wasn’t being used. But that thought quickly evaporated at 9 PM as the band appeared on stage and began a stellar 16-song set with the iconic ‘Highway Star’. Vocalist Ian Gillan came out with a sense of purpose and thoroughly enjoyed himself up there, interacting fondly with his band mates as well as the audience. He hit his true vocal stride on the second song ‘Into The Fire’ and expanded his range furthermore as the set progressed, hitting the high notes much to the delight of this old-school rock gathering, but also presenting the mid-range beautifully on some of the tunes.

Aside from Gillan’s exemplary vocals, instrumentally the band were on fire from the outset with original members Roger Glover (bass) and Ian Paice (drums) holding up the rhythm section with aplomb, with Don Airey, in the band since 2002, delivering the vintage Deep Purple keyboard element to perfection, and Steve Morse, the youngest member of the group at the age of 60, leading the charge with a fantastic performance on guitar. His exhibition of licks and solos was truly one of the finest I’ve seen from any rock/metal guitarist and following the departure of Ritchie Blackmore, he has played a crucial role in ensuring that Deep Purple’s legacy as a live and in-studio band has been kept intact ever since he joined in 1994. 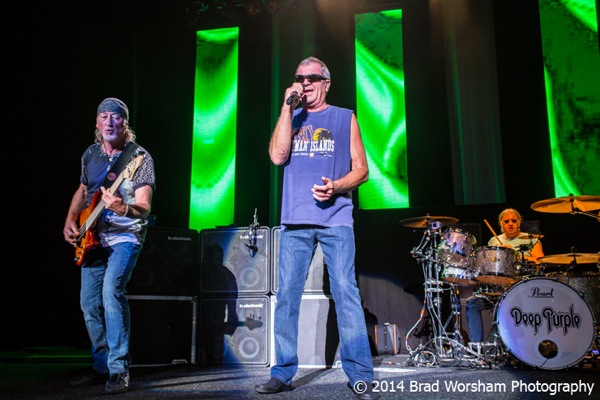 The three tunes off of ‘Now What?!’ sounded compellingly interesting, the song ‘Vincent Price’ in particular standing out as one of the highlights of the entire set and matching up to the classics in every sense. The set list was an apt selection from the Deep Purple catalog that not only thrilled first-timers like myself but equally satiated the desires and demands of longtime fans in the audience. But most importantly, unlike their opening act here, they kept the solos and jams to an optimum level, just the right amount to showcase the individual expertise of each member and to punctuate the set at opportune moments. This wasn’t the Deep Purple of yesteryear that would jam endlessly and self-indulgently, but rather a more balanced Deep Purple that held the audience’s undivided attention through the set, as was evident from the loud sing-alongs they were reciprocated with on hits such as ‘Space Truckin’, ‘Smoke On The Water’ and ‘Hush’ towards the end.

With all six members in their 60s, one can’t expect Deep Purple to carry on for too many more years, so every hard rock/heavy metal fan who hasn’t yet had a chance to see this band live must do so before they retire, because they clearly still deliver a show that justifies their legend.