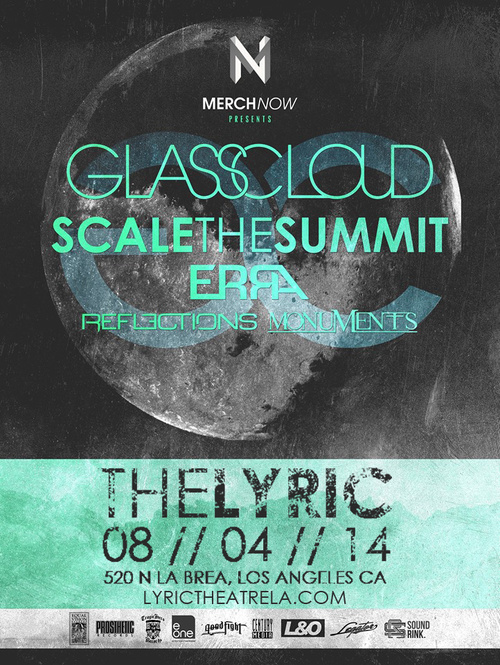 August 4th 2014, The Lyric, Los Angeles CA: At the beginning of the summer I graduated from school in Santa Barbara and returned home to the city of Los Angeles to begin the next chapter of my life. Living in the city for the past four years with a population of roughly 80,000, very few shows made their way to my neighborhood, so it has been a while since I actually got to enjoy some heavy metal. What better way to celebrate my return to my home city than with a show incorporating several of my favorite musicians and a night of with some good friends? With Glass Cloud and Scale the Summit co-headlining and support from progressive metalcore giants ERRA, UK tech metallers in Monuments, and the young talent in Reflections, the night was sure to pack a punch.

First to take the stage was the band I was most looking forward to. Hailing all the way from the UK, Monuments, fronted by former Fellsilent guitarist John Browne with former Periphery and Ever Forthright vocalist Chris Barretto on the mic, Monuments has quickly become a fan favorite in the prog metal world and are making waves in every country they visit. Although the band only played a 6-song set, it was the perfect way to not only kick off the night, but also demonstrate to those who haven’t heard of Monuments just how talented they really are. The band managed to play a few songs off of their first release, “Gnosis”, as well as showcase some of the newer songs off of their recent album, “The Amanuensis”. Chris Barretto not only demonstrated exactly why several touring bands have included him amongst their ranks, but his energy was consistent and always managed to incorporate the crowd in each song. Between songs, an impromptu “Another One Bites The Dust” swept the crowd off their feet. Aside from being absolutely hilarious, this type of stage antic really helped everyone cut loose; even the tough guys were singing along. Monument’s performance was the most impressive of the night, in my opinion. You really get a sense that all of the players in Monuments have been doing this for a while, and considering that they play in front of tens of thousands of people in Europe, playing in front of maybe a couple hundred people was surely no problem for these seasoned veterans. Closing the show with their single “I, The Creator”, Monuments set the perfect tone for the rest of the night and it was clear that, at least in Los Angeles, Monuments would have a new fan base their next time in town. Check out my in-depth interview with John Browne and Chris Barretto for a detailed and truly amazing explanation of “The Amanuensis” and the various themes and motifs that make the album so hauntingly brilliant.

Interview with Monuments to be posted soon

Next to the stage were the young tech maniacs in Reflections. While I am not normally a fan of their music (there is a bit much going on all the time) the band brought a high-energy performance and it was clear that their fans were absolutely eating it up. Each musician in the band clearly has control over their instruments, but again, their music is just not for me.

Introducing their new vocalist, Ian Eubanks to a sold-out crowd, ERRA was up next. ERRA was the one band along with Monuments I was most looking forward to seeing that night. I have always found their style of progressive metalcore extremely compelling and think their musical technicality is practically unparalleled in that particular sub-genre. As expected, the band put on a phenomenal performance and it was evident that they had found a lasting member in Ian Eubanks. His presence was engaging and his vocal performance was supremely brutal. The band opened with a few songs from their latest album, “Augment”, and towards the middle of their set shifted to a couple older tracks such as “Seven” which was definitely the crowd favorite. Clean vocalist, guitarist, and primary songwriter, Jesse Cash eventually introduced a new song entitled “Moments of Clarity” which will be one of the tracks off their upcoming EP. It was comforting in being able to hear a new ERRA track that combined all of the aspects to their music that makes me appreciate them: the melody, the harmony, and the brutality. It was a truly epic surprise!  Closing their set with my favorite track, “Hybrid Earth”, the crowd erupted into a massive swarm of moshing fans eager to grab the microphone and sing along. It was truly a memorable performance and similarly solidified my faith in ERRA and the future of their music.

As ERRA finished their set it was clear that the crowd needed a break from the heavy jams and with that, the legendary Scale the Summit took the stage. This is not the first time that Metal Assault will have covered a Scale the Summit performance and I can assure you it will not be the last. Touring in continued support of their last album “The Migration”, Scale the Summit managed to play a great handful of songs from their new release while also returning to some classic tunes like “Bloom” and one of my favorites “The Levitated”. As always, the crowd was watching in awe as each musician demonstrated such disciplined control over their instruments. Over the years I have been lucky enough to watch the natural progression of Scale the Summit’s music and stage performance and I have to say that this occasion was truly one of my favorites. The lighting, the videos on the giant screen, and the atmosphere was truly welcoming of such beautiful music.

Headlining the evening was Glass Cloud, the dynamic duo that is Josh Travis formerly of the Tony Danza Tap Dance Extravaganza and Jerry Roush formerly of Sky Eats Airplane and Of Mice & Men. Although it was clear from the get-go that the band was missing some of their members, Glass Cloud put on an intensely energetic show and showcased some of my favorite tracks. The majority of the audience was at the Lyric in support of Glass Cloud, so the amount of crowd participation was absolutely explosive. Roush, although a little sick, put on an absolutely stellar vocal performance and allowed some of the fans on stage with him to sing the songs. The band managed to play what I think are the best songs from their debut record and also touched on some of the crushing tracks from their latest EP, “Perfect War Forever”. Travis is clearly a master at creating unfathomably heavy songs and has, at this point, solidified his position in the pantheon of this generation’s guitar warriors. It was an incredible experience to watch live and I will be sure to catch them next time they are in town.