May 25th 2014, Down & Out Bar, Los Angeles CA: This year’s Memorial Day weekend rolled in with a local rock night at the Down & Out Bar in downtown Los Angeles, featuring an eclectic lineup consisting of Rooftop Revolutionaries, Elixir On Mute, Downtown Attraction and Chelsea Doll. As is always the case with rock and metal shows at the Down & Out, this was a free show, but unlike most Sunday nights that are lightly attended, this being the Memorial Day weekend meant an excellent turnout, and things were all set for the show to begin at 9 PM.

Female-fronted quintet Chelsea Doll started proceedings with a 30-minute set of Runaways-inspired old-school rock ‘n roll. While the guitar tone was solid and the rhythm section came across decently, the vocals needed to be a bit more powerful for the band to successfully achieve the Runaways-type sound they were going for, and besides announcing the name of the next song, the singer’s level of crowd interaction and frontmanship was absolutely zero. For me, the group didn’t quite ‘rock’ nearly enough to be deemed a rock band.

The next band Downtown Attraction played a completely contrasting set, filled to the brim with high-energy punk-infused hard rock, led excellently and dynamically by vocalist Jack Cash. Even though he donned the guitar for a song or two, the songs Downtown Attraction played with him on vocals alone allowed him to be more expressive and energetic, and hence were far more enjoyable. He was well assisted by his three band mates in this classic four-piece vocals-guitar-bass-drums lineup and together the quartet garnered a positive response from the crowd here at Down & Out. In the live setting, rock ‘n roll is all about the energy and these guy possess it in plenty, so to fans of the genre in the LA area, I’d recommend checking out Downtown Attraction at their next show.

Rooftop Revolutionaries took the stage with an equally energetic but slightly different interpretation of rock, showcasing a bit more of its darker, serious side through politically charged lyrics. They carried themselves with good conviction on stage and vocalist Eleanor Goldfield proved to be a great frontwoman, easily the best in her role in comparison to the other three bands that played this show and the only one to make any effort to interact with the crowd. Besides their own tunes, Rooftop Revolutionaries played a delightful cover of Creedence Clearwater Revival’s ‘Fortunate Son’ as well, but their set was ruined to an extent by an intermittent crackling noise emanating from the PA, most probably coming from the vocal channel. So, while Rooftop Revolutionaries gave a good account of their musicianship and collective on-stage personality as a group, this wasn’t quite an accurate representation of the band, owing to the sound issues. 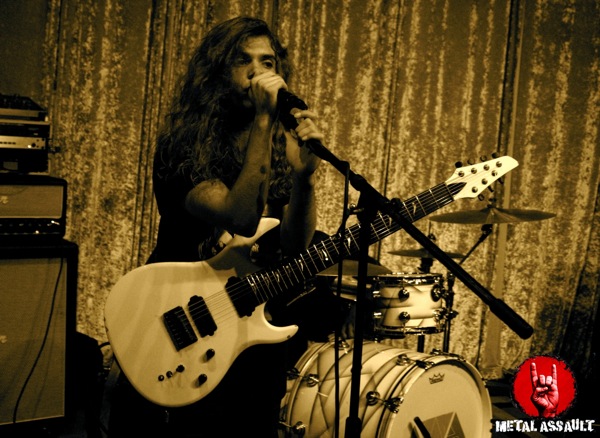 And lastly, taking the stage at ten minutes to midnight to deliver an absolutely scorching 30-minute performance were prog rock/fusion trio Elixir On Mute. Stylistically they perhaps turned out to be more ‘up my alley’ as compared to any of the other three bands, as they brought forth an incredibly diverse blend of hard rock, thrash, shred, prog, funk and jazz, and through the efforts of leader/founder Jordan Ferreira on guitar and vocals, Jon Reshard on bass and Padget Nanton on drums, they played a mightily impressive set that showcased their individual and collective musical skills. The pocket-sized Jordan Ferreira was nothing less than a spastic live-wire up on that stage, and was thoroughly enjoyable to watch. He excelled at both aspects of his role, although the guitar could have been louder in the mix. The rhythm section came up with some greatly creative fills as well, and together the trio certainly turned a few heads and caught the crowd’s attention, which was still large in number as a result of the impending holiday. For fans of power trios and prog, Elixir On Mute is well worthwhile and all readers of this site are strongly encouraged to give them a listen.

Overall, the efforts of these four local bands to go with the pleasant ambiance of the venue made for a fun evening out for all attendees, and one craves for more such events, specially in the downtown LA area.