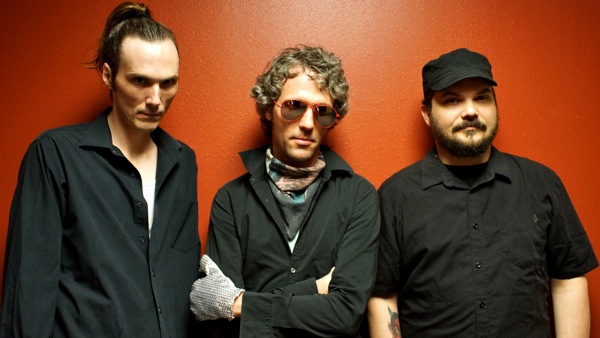 May 24th 2014, The Satellite, Los Angeles CA: First formed in 1992 but then having gone into oblivion for a decade as a result of guitarist/co-founder Steve Brooks forming the band Torche, Floor is a Miami FL-based doom/sludge band that reunited recently and released their third full-length album ‘Oblation’ via Season Of Mist Records in April and are now on a US West Coast run, along with support act Thrones, to spread their low-end onslaught. They visited the Satellite last night for a well-attended headline show to present a combination of these new tunes and selections from the two pre-breakup albums. 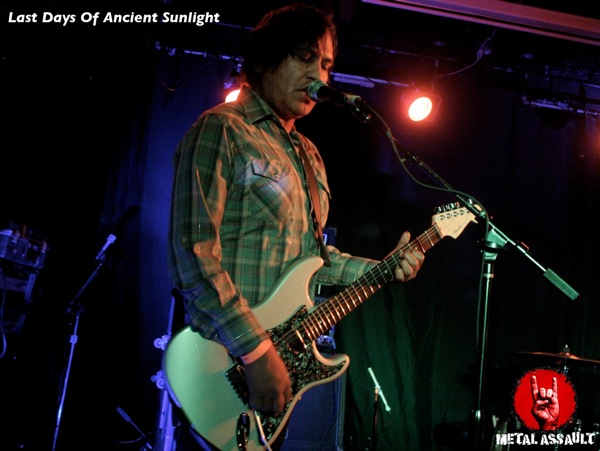 The show had one local opener called Last Days Of Ancient Sunlight. Somewhat of a supergroup consisting of Antonio Aguilar (Totimoshi) on guitar/vocals, Chris Burnett (ex-Sabertooth Tiger) on bass/vocals and Ferdinand Cudia (ex-400 Blows) on drums, the trio began proceedings for the evening at around 9:10 PM with a 30-minute set. Still a very new entity that formed on May Day last year and hasn’t recorded any music yet, Last Days Of Ancient Sunlight played some effortlessly simple, organic rock jams that fit the vibe of the venue and the show. Each of these three members have cut their teeth in the LA scene for a number of years, and their experience as musicians was evident from the ease and smoothness with which they played on stage. Their chemistry as a group could also be felt, and they certainly showed great potential. They turned out to be an ideal local opener for a show of this nature. 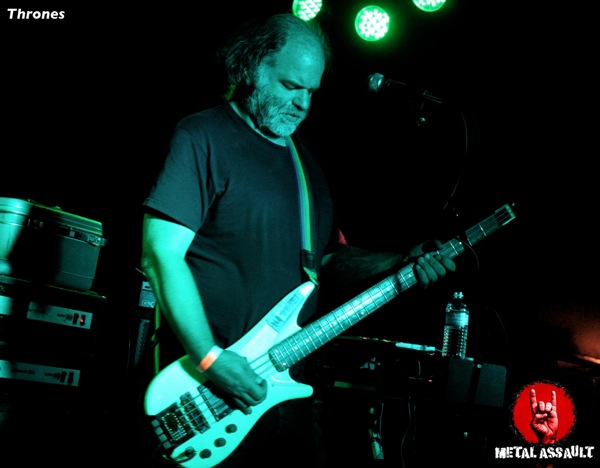 Next up was Salem OR-based one-man act Thrones featuring Joe Preston (formerly of Earth, Melvins, Sunn O))) and High On Fire) with his bass, wall of amps and array of pedals demonstrating his unique brand of musicianship which he has carried on his own for nearly two decades now. For this show he used an assortment of effects, loops, backing tracks and spoken-word samples to go along with his live bass playing and his sarcastic sense of humor to put together a 30-minute set well-appreciated by the crowd which by now had grown rapidly in number in comparison to when the doors opened. His music clearly has a very experimental, avant-garde nature to it and is interspersed with industrial and noise elements, but its live rendition made for an interesting listen, and it’s not hard to imagine Preston picking up new fans during the course of this touring run.

By this time, the Satellite was abuzz with a great turnout, and although I’ve made this observation every time I’ve visited this venue, I’ve never officially mentioned it in a review so I’ll go ahead and say it now: out of all LA and Orange County venues, the female section of the audience the Satellite attracts for any show is by far the most eye-pleasing, and it perhaps has a lot to do with the neighborhood and the general demographic of the live music environment of the venue. Anyway, promptly at 11 PM, Floor hit the stage for an excellent hour-long performance that demonstrated the individual and collective brilliance of Steve Brooks on guitar/vocals, Anthony Vialon on guitar and Henry Wilson on drums. They played most of ‘Oblation’ with a few tunes off of the 2002 self-titled full-length and the 2004 album ‘Dove’ thrown in the mix, giving their fans plenty of reason to cheer and indulge in slow head-banging. Even without a bassist, the down-tuned guitars of Brooks and Vialon ensure that Floor sounds heavier than most three-piece bands with bassists, and the trio’s low-end sludge left the crowd rocking and swaying, fully justifying the band’s name in the process.

The material Floor played from ‘Oblation’ received as good a response from the crowd as the older tunes did, showing that the album has been an eagerly awaited release amongst fans, and it proved that Floor’s comeback isn’t without valid reason as there’s clearly a demand and appreciation for the band which does things quite differently from Brooks’ other project Torche. He was all smiles during this performance, delivering vocals expressively and laying down a solid guitar sound to combine well with the efforts of Anthony Vialon who was excellent on the guitar himself, while Henry Wilson hit the drums with purpose and conviction, lending great punch to those slow, singular notes.

Floor delivered a fantastic show that was well worth the attendees’ time and money, and this tour will hopefully lead to the band becoming more active as a touring entity. Overall, yet another enjoyable night out at the Satellite for all involved.

Check out a gallery of 22 photos from the show below, or view it here if you’re on a non-Flash device: