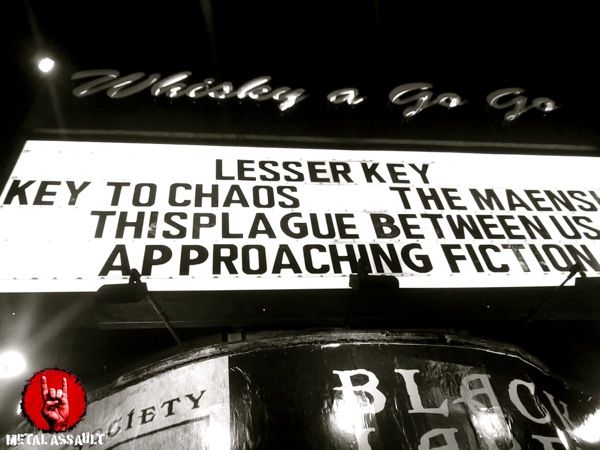 April 15th 2014, The Whisky-A-Go-Go, West Hollywood CA: Lesser Key, the new Los Angeles-based rock group featuring the talents of founding Tool bassist Paul D’Amour along with Andrew Zamudio (vocals+samples), Brett Fanger (guitar) and Justin Hanson (drums), released their self-titled debut EP on April 1st via Sumerian Records, and played a hometown headline show at the Whisky last night to present all six tunes on the EP in the live setting. The EP itself comes across as an excellently composed and produced 26-minute slab of atmospheric/progressive rock that highlights the musical skills of D’Amour and his band mates in a manner anyone familiar with their background would expect, and I was very much looking forward to its live rendition here.

At around 10:45, the band made their way onto the stage without much fuss, played the EP in its entirety with little to no breaks in between, and exited the stage just as quietly as they entered it. The most striking feature of the band’s live sound was the prominence of Paul D’Amour’s bass which was clearly the lead instrument while Andrew Zamudio and Brett Fanger used their respective instruments, the sampling table and the guitar, primarily to induce atmospheric patterns into the music and Justin Hanson behind the drumkit performed the role of keeping the rhythm and structure of the tunes intact. To top it all, Zamudio’s tender vocal delivery fit in with the music beautifully and gave it an ethereal touch. All six songs sounded great but ‘Intercession’ was certainly the best of the lot, and it’s no surprise that it was chosen as the single track to represent the EP. The music video for the song below, directed by Brian Butler, gives you a perfect idea of the nature and vibe of the band’s music (NSFW and suitable for 18+ audiences only):


Lesser Key’s music would automatically appeal to fans of Tool, A Perfect Circle, Porcupine Tree and bands/artists of that kind. Based on this performance, it’s safe to say that these bass-driven tunes sound more powerful in the live setting than on the EP itself, but the EP is very much highly recommended to anyone who has ever enjoyed any of the aforementioned bands. 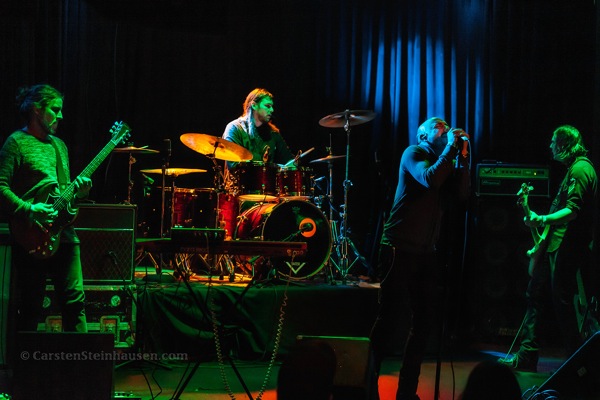 But on the flip side, the band’s brilliant performance was ruined greatly by the far-from-ideal atmosphere that was prevalent inside the Whisky during their set (and this has nothing to do with the venue itself). The turnout was very light, and consisted more of the random walk-in crowd rather than genuine fans. Most people were drunk and busy talking amongst themselves even as the band was playing on stage, and for someone trying to watch and listen to the band, it wasn’t a suitable setting. I can imagine Lesser Key’s music being hypnotically powerful after a few tasty tokes, but sadly this crowd was intoxicated on the wrong substance and hindered the impact of the band’s set.

Aside from that, perhaps it was too early for Lesser Key to play a headline show at a venue like the Whisky on a Tuesday night, and with only a six-song EP under their belt, their set was much too short for a headline act anyway. They’d be probably better-served to play as support act with other like-minded bands and musicians for the time being. Steven Wilson, for example, would be the absolute perfect musician for Lesser Key to perform with, I would think. Nonetheless, for those who attended this show to actually witness Lesser Key’s performance, it wasn’t disappointing by any means and we look forward to their next LA show, hopefully in a better setting.

Check out some fantastic photos of Lesser Key from this show using the slideshow below (view them here if you’re on a non-Flash device):