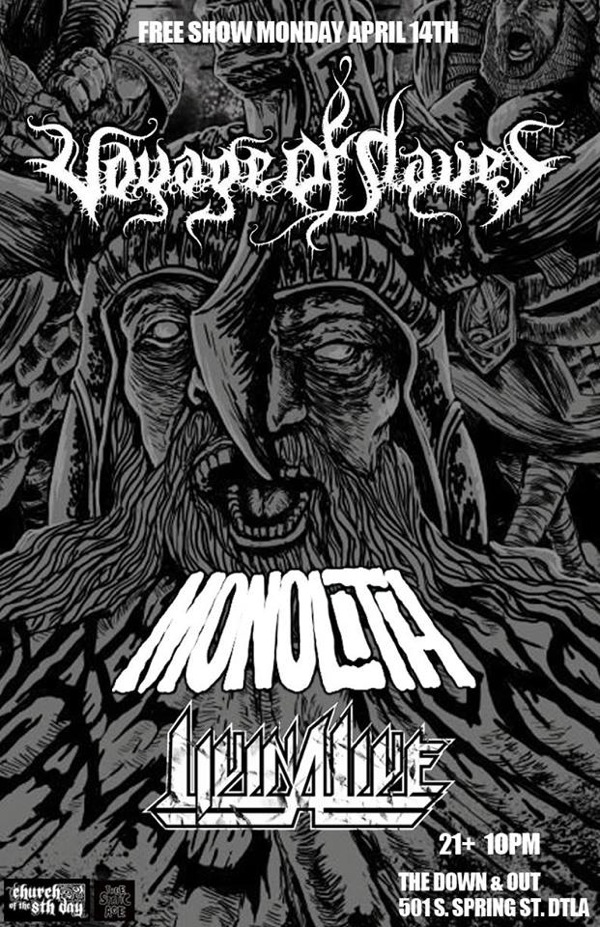 April 14th 2014, Down & Out Bar, Los Angeles CA: Kentucky-based extreme metal band Voyage Of Slaves embarked on a US tour a couple of weeks ago with San Diego’s classic metal outfit Monolith, with whom they’ve put out the ‘Beard Splitter’ split 7-inch, joining them for the California leg of the itinerary. Last night at the Down & Out bar in downtown LA was Voyage Of Slaves’ first ever Los Angeles gig, and providing local support for this show, brought to us by underground promoters Church Of The 8th Day and Thee Static Age, were San Gabriel Valley metal quartet Livin Alive. The show was absolutely free of cost and began at 10:30 PM. For the people who showed up at this cozy sports bar last night to enjoy some drinks and live music, it turned out to be quite an entertaining evening.

Livin Alive opened the show with a fierce 30-minute set. It was my first time seeing them since they opened for Cauldron and Night Demon at the Five Star Bar last year, and to me they sounded like a completely different band last night as compared to back then. Not so much of a Diamond Head clone anymore, Livin Alive have incorporated copious amounts of thrash and black ‘n roll into their newer tunes, and as a result their live show has improved tremendously. For any fan of metal, it doesn’t take more than an instant to start enjoying Livin Alive’s music, specially when delivered in the live setting in the manner they did here. There wasn’t a single person in the room last night that wasn’t impressed by this band’s performance. LA locals are strongly encouraged to check out Livin Alive at one of their upcoming shows.

Next up, Monolith brought much joy to fans of old-school classic metal with their set, which besides their righteous original tunes also included a fantastically executed cover of Iron Maiden’s ‘Purgatory’. Monolith’s musical style came across as a glorious blend of Iron Maiden and Manowar influences, with touches of punk, thrash and doom also sprinkled in the mix to make it a combination almost impossible for any true metal fan to dislike. The singer did a great job with his soaring high vocals as well as the mid-range parts while the guitar melodies were epic and the rhythm section had that old-school Maiden feel to it. It was my first time seeing them but if their future LA shows are anywhere near as good as this one, they might just become my new favorite band. All hail Monolith.

And lastly, Voyage Of Slaves took the stage with their brand of death/thrash/black metal. Even though their set was darker and more serious in its atmosphere than the other two bands, it still boasted of guitar dual leads and harmonies that would be appreciated by those who liked Monolith and Livin Alive. Their musicianship was undoubtedly impressive, and with this tour they’re well on their way towards winning plenty of new fans throughout the country. They gave a good account of themselves on their first appearance in Los Angeles, and by the looks of it, it certainly won’t be their last. They ended the set with a tease of Pantera’s ‘A New Level’ and brought this show to an close.

Overall, this was a great show highlighting the talents of two excellent out-of-town underground groups and one awesome local band. The turnout was light as expected on a Monday night, but credit goes to the promoters for continuing to devote their efforts towards developing and maintaining a scene. The Down & Out is, in my opinion, a good place for live metal music with friendly staff and an ideal setting in terms of the sound, lighting and the general layout, so I’d recommend LA folks to support this establishment by attending more shows here.