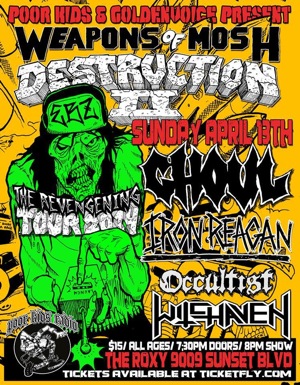 April 13th 2014, The Roxy, West Hollywood CA: Cloaked marauders Ghoul embarked on a short US West Coast run earlier this month titled ‘Weapons Of Mosh Destruction II’ with Richmond, Virginia-based bands Iron Reagan and Occultist, and along with local opener Witchaven, the touring party made a Los Angeles stop to slay the Roxy in West Hollywood last night, for a show curated by Poor Kids Radio and Goldenvoice. Both Ghoul and Iron Reagan are known in the LA metal community as bands that have put on immensely enjoyable live shows in the past, Iron Reagan having done so with greater frequency in recent times, and the people who turned up for this show expected the same level of entertainment from the two bands. Amidst a hilarious backdrop of the Rainbow’s 42nd anniversary party going on in the parking lot behind the venue, a show of a totally different demographic, ticket holders for the Ghoul show lined up outside the Roxy. Doors opened promptly at 7:30 and all was set for proceedings to begin.

Witchaven opened up the show with a solid 25-minute set comprising three of their most well-known older tunes and two new ones, ‘Blood Sacrifice’ and ‘Children’. I got a larger taste of the newer material at their Skinny’s show a couple of weeks ago, but on this bigger and better-sounding stage these new songs sounded fantastic, specially ‘Children’ which was the highlight of this short but impressive set. The turnout at the venue was light during their performance but they managed to trigger a few mosh pits nonetheless, and proved that they’re back with a vengeance, better than ever before. Those who didn’t catch Witchaven at this show, whether it be on purpose or for valid reasons, missed out on an excellent set by these boys.

Next up, Richmond-based quintet Occultist took the stage with their brand of crust/thrash/death. A lot of people in this crowd seemed unfamiliar with the band, myself included, and it must be said, their musical style came across as far more intense and serious than the other three bands on this lineup which naturally meant it would take a while for a crowd of Ghoul/Iron Reagan/Witchaven fans to get into. For the first half of their 30-minute set there was no movement in the crowd whatsoever, but people gradually warmed up to Occultist and the last couple of songs garnered more action. The band clearly stood out as the odd one on this lineup but gave a good account of themselves, with vocalist K.Z. ably fronting it with her raw aggression on vocals and well backed up by her band mates. I personally enjoyed their slower, doomier parts a lot more than the fast-paced punk/crust stuff. For the style of music they’re pursuing, they put on an excellent performance and will certainly be a band worth seeing every time they come and play in these parts.

The righteous Iron Reagan were up next to lay their onslaught on this Roxy stage in a manner only they can. Consisting of experienced musicians that have made their mark on the metal scene through their exploits in various bands such as Municipal Waste, Mammoth Grinder, Cannabis Corpse, Darkest Hour & others, Iron Reagan began in 2012 but have already put out three great releases and on recent tours with the likes of Exhumed and GWAR, they’ve developed a reputation as an unmissable live act. This trait was on full display here at the Roxy as the band led by the ever-energetic, humorous and intense Tony Foresta on vocals did what they do best, playing a crushing 18-song, 40-minute set of crossover thrash/punk. But beyond that, to me they possess the complete package as a live metal band with big riffs, killer rhythm section, tempo variations going from mid-paced to ultra-fast in the blink of an eye, an insane vocalist, and the right dosage of jokes and speeches. Along with Tony Foresta, drummer Ryan Parrish also played a huge part in the humor aspect. Even though Iron Reagan have performed in front of crazier crowds in past LA/OC shows, Chain Reaction in Anaheim last December for example, overall this was the best I’ve seen from them and it’s clear that they get better each time they come around. Horns up to Iron Reagan.

And finally at 10:30, the tyrants in Ghoul arrived at the scene and destroyed this place to pieces with their typical blend of thrash, grindcore, theatrics, stage props, blood and guts. They played their instruments as babies were slashed, guts were spilled, and killbots, destructors, cops and various other characters made appearances on stage to pump tremendous energy into this crowd. Seeing them headline here at the Roxy was several times better than bearing witness to the set they played at the Vex last year, in every aspect imaginable. Song after song, the number of stage divers was increasing, and the energy and intensity of the atmosphere inside the Roxy kept rising further. It reached its crescendo when the band played ‘Americanized’, the final song of the night, as a tribute to Dave Brockie of GWAR and for this they invited members of Iron Reagan and Occultist to join them, along with the twins in local LA band Brain Dead. But aside from the musicians, a large number of people in the crowd stage-dived altogether at once and the stage turned into a giant chaotic mess to provide an apt ending to the show.

It was almost as entertaining to watch the various kinds of stage divers during Ghoul’s set as it was to watch the band, ranging from the ones who got up there and quickly departed, some who hung around and danced all over the stage until they were kicked off by band members or venue security, others who decided to grab microphone stands and uninvitedly take over vocal parts, and then there was one guy who was audacious enough to get up on stage and take a selfie with a band member with his cellphone, easily the most hilarious moment of the night. That’s the Ghoul effect for you.

Overall, this was a massively fun-filled event for all involved, and even though the crowd’s energy was surprisingly low for the first three bands which is not a trait associated with a Poor Kids show, Ghoul brought the best out of them and the show ended on the right note. The Roxy is the absolute perfect venue for shows of this nature, and hopefully Poor Kids will bring more of their shows (or all, if possible) to this venue in the near future.