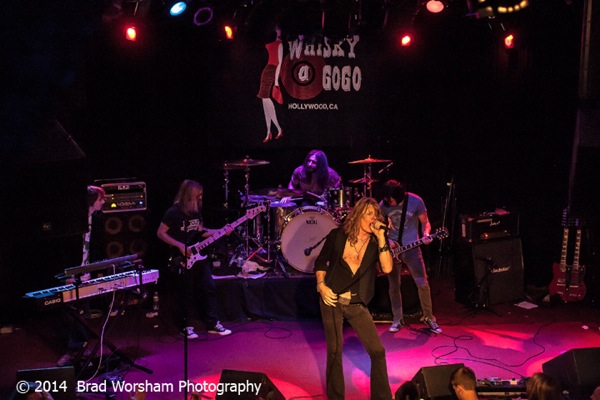 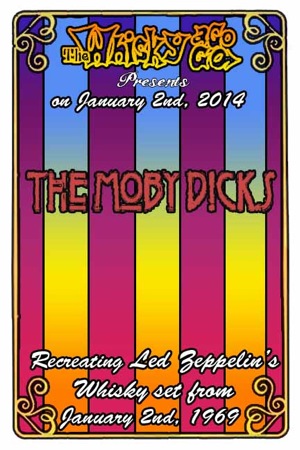 January 2nd 2014, The Whisky-A-Go-Go, West Hollywood CA: The oldest rock club on the Sunset Strip and one of the oldest rock venues in America, the Whisky-A-Go-Go is currently holding a month-long celebration of its 50th anniversary, and it began last night with premier Led Zeppelin tribute band The Moby Dicks playing a headline show, on the exact 45th anniversary of Led Zeppelin’s first ever Los Angeles show, which happened to be at this very same venue. The Moby Dicks lineup boasts of some hugely talented and greatly experienced musicians in its ranks, led by Brian Tichy on drums and featuring Chas West on vocals, Brent Woods on guitar, James LoMenzo on bass and Stephen LeBlanc on keyboards. This show was billed as a recreation of that eventful night of January 2nd 1969, so there was a lot of nostalgic value to this show and plenty for the hardcore Zeppelin fan to look forward to.

But before that, the main support act for the evening, The Aviators from Bakersfield, California, took the stage and played a highly impressive 35-minute set of pristine rock n’ roll. They created a vibe akin to the 70s era of rock with a nod to classic AC/DC, and with both guitarists delivering crisp tones through their Gibson Les Pauls and the vocalist carrying boundless energy in his singing and stage moves, this band clearly showed that they’re graduates from the old school of rock n’ roll, and they managed to please the purists in this sparse crowd, certainly winning some new fans in the process. Their set consisted of six original tunes and two covers, and it gave this audience a great representation of what this band is all about. With this level of performance, they deserved to play to a packed house and it was unfortunate for them that the turnout here, at least at this point in the evening, wasn’t as good as expected. But all attendees who did see The Aviators would be grateful to them for making the long drive from Bakersfield and playing a thoroughly enjoyable set, and true rock n’ roll fans in the Los Angeles area would definitely not do themselves any harm by catching The Aviators whenever they come to town again.

At 10:40 PM, The Moby Dicks hit the stage, and during the first part of their show they played the 9-song set that Zeppelin performed here exactly 45 years ago. Owing to the fact that the show in 1969 took place even before Zeppelin put out their debut album, it consisted of some of the earliest, most obscure material the band ever played, and as a result, this part of The Moby Dicks’ was perhaps the bluesiest set of tunes I’ve ever seen from any Zeppelin tribute band. As singer Chas West aptly put it, ‘The thing about the blues is, it doesn’t have to be perfect. You just have to go for it.’ This was the motto The Moby Dicks went with in their endeavor to do justice to these fantastic tunes, and through a great degree of improvisation that came extremely naturally to each member in this band, they were successfully able to recreate the magical spontaneity and creativity of a live Zeppelin set. 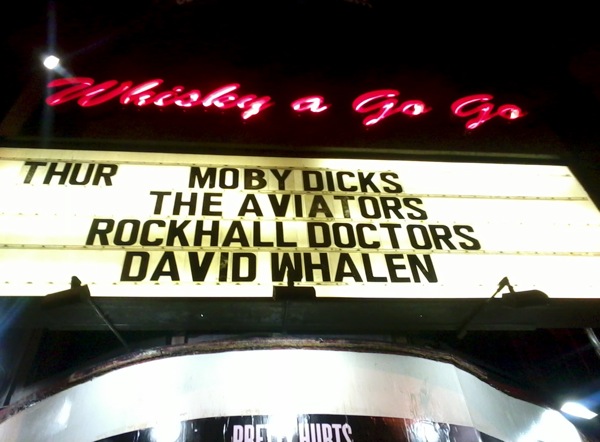 My previous time seeing The Moby Dicks was at the Viper Room last July, and on that occasion they did Zeppelin’s epic ‘Day On The Green’ set, but the major difference between that show and the one last night, and the one aspect that almost singlehandedly deemed this show a much greater success was singer Chas West’s performance. He delivered the goods, meeting and exceeding the requirements of each and every song in the set, but unlike last time, he did so without the aid of lyric sheets. He might have had a lyric book on stage but he hardly even used it. Because of this, I found a new level of appreciation for his talents, and this was certainly more like how the frontman of a Zeppelin tribute band should peform on stage.

Even after ending the 9-song Zeppelin ’69 set and fulfilling their promise of recreating that historic show, The Moby Dicks were far from done, and went on to play for quite a while, making it an amazingly long set which clocked a total of nearly three hours. With every tune, their performance level only went higher, and it reached its peak at its culmination with a mesmerizing medley of ‘Whole Lotta Love’ and ‘Achilles Last Stand’. It wasn’t the alcohol, it certainly wasn’t the drugs. This group of musicians was high on Zeppelin.

They presented a variety of material covering the Zeppelin catalog, but didn’t merely stick to the generic classics and instead included deeper cuts like ‘The Wanton Song’, ‘The Rover’ and ‘Ten Years Gone’. Jeff Pilson of Foreigner, Dokken and Dio fame replaced LoMenzo to play bass for ‘Ramble On’, which was a nice surprise bonus for the audience. Drummer Brian Tichy put on an expectedly incredible show on the kit, and after seeing him jam these Zeppelin tunes on two occasions now, I have absolutely no doubt in my mind that he enjoys playing Zeppelin more than anything else he does or has done. Last night was sheer proof that his entire musical persona is on display when he’s in Bonzo’s role. LoMenzo, Woods and LeBlanc did their duties to perfection as well, and now combined with Chas West’s enhanced levels of frontmanship, I can honestly say this is a tribute band every Zeppelin fan needs to go see.

The show went on past 1:30 in the morning, so naturally, some of the crowd thinned out towards the end but the hardcore Zep-heads stayed for the entirety of the show. The Moby Dicks put on a truly spellbinding performance last night and thanks to them this audience was able to relive a glorious night in rock history.

Check out more photos by Brad Worsham below: