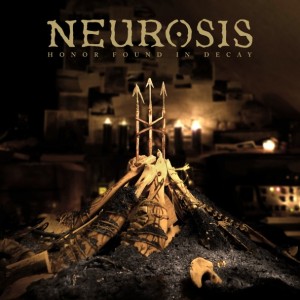 December 29th 2013, The Regency Ballroom, San Francisco CA: 2013 has been a landmark year for the Bay Area heavy metal live show. This year, the place has seen an astounding number of one-of-a-kind events in just about every style of the music. The likes of Orchid, Brocas Helm, Death Angel and Exodus leveled their venues with special hometown shows, while touring acts like Bolt Thrower and Clutch played houses packed wall-to-wall with rabid and enthusiastic fans. That being said, 2013 ended with an experience that music enthusiasts can always count on being incredible: a local show from the godfathers of the Bay Area underground heavy metal, Neurosis. Thanks to an outstanding bill, an exceptional audience and awe-inspiring performances, this night made for one of the finest metal concerts of the year and a perfect demonstration of just how great Bay Area heavy metal can potentially be.

The first band up was The Body from Portland, OR. The duo was initially greeted by a small gathering of early-birds, but the audience would steadily grow throughout the set. It was impossible to decipher the words that came with Chip King’s primal howling, but one couldn’t deny the visceral power and intensity that his vocals possessed. King’s riffs, aided by an astounding array of effects and other gear, were of the lurching and uncomfortably slow variety. Though it was tough to headbang to this band, the music was very hypnotic thanks in part to massive (and once again, really slow) beats from Lee Buford. The drummer was joined for about half the set by Rob Shaffer from Dark Castle, who played a second full kit and synced up with Buford nearly perfectly. Having two drummers play at the same time is inherently tricky- having their parts played at a 2 mile an hour crawl without falling apart was a stunning feat. The audience seemed to appreciate the mesmerizing trance-like doom of The Body, and the music (the best description I can think of is “the soundtrack to the post-apocalypse”) was given a massive mix, which would pleasantly be a regular occurrence throughout the night.

Second on the bill was the lumbering doom juggernaut YOB. The current lineup of the band has clocked in plenty of time on the road in the past two years, and the fruits of their labor were easily apparent throughout their thirty minute set. It began with their classic ‘Quantum Mystic,’ a marching behemoth of a track. Frontman and guitarist Mike Scheidt’s incredibly heavy riffs were in vintage form, though his vocals appeared to have changed as of late. Scheidt’s falsetto wails have gained a layer of grit and are just a touch lower than they once were- to this attendee’s ears, this was actually a great thing. The new sound added character to Scheidt’s versatile singing, and attenuated what used to sometimes be too strong of a disparity between his two primary vocal styles.

Though the aural aspect of a YOB performance has always been of a tall standard, this set was played by a band far more confident and animated onstage when compared to their prior tours. Scheidt remained planted at his station but his headbanging, complete with full body swinging, was commanding and demanded the audience’s attention. Bassist Aaron Reiseberg thrashed his head about frequently as well, but what was especially striking about the man’s contribution to the set was his mammoth tone. When Scheidt would take a solo, Reiseberg’s immense playing filled the air without a compromise in the mix. Travis Foster more than held his own on the drums as well, pounding his heads with a truly unrelenting force. When the final note of ‘Grasping Air’ faded away, one knew that they had seen an undeniably outstanding set from YOB. If you don’t believe me, just ask any of the hundreds of other attendees that were banging their heads perfectly in time with Foster’s pummeling beats. While it would have been nice to have had a longer set from YOB, the band’s thirty minutes onstage was anything but disappointing. All killer, no filler. 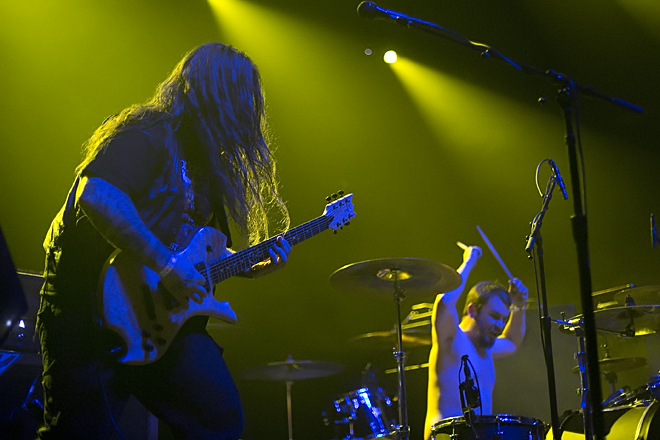 The last support act of the night was perhaps the odd one out on the bill, Santa Cruz hardcore punk veterans Bl’ast. Unlike the other acts, Bl’ast had something to prove at this show- this was their first Bay Area appearance in over a decade. The set began with an ominous bass intro from Nick Oliveri, with drummer Hoss Wright and guitarist Mike Neider soon joining in to ease the crowd into ‘Only Time Will Tell…’ At just under two minutes in, Clifford Dinsmore let loose and unleashed his razor-gargled shouts. For the next half an hour, Bl’ast pummeled the Regency with their metal-infused brand of hardcore punk. While Bl’ast may have seemed out of place on a bill made up of doom and sludge acts, their music actually fit in far better than one would expect. Tracks like ‘Nightmare’ showed off just how heavy this band could be, and their eclectic fusion of lightning quick punk and the occasional unsettlingly slow and serrated riffing was anything but one-dimensional. At this show Bl’ast showed that they’re kind of a weird band- for fans of “out-there” acts like Neurosis, this was probably more than okay.

A great many tunes from the band’s recent release Blood made the rounds for this show and the songs sounded perhaps even more powerful live than on record. Oliveri and Neider’s guitars were given a beefy and raw treatment in the mix, while Wright’s hits came through crystal clear. Dinsmore offered a truly outstanding performance, as his once scrawny and snotty vocals now sounded legitimately muscular yet jagged, and his stage presence dominating and wild. Bl’ast’s half hour onstage was the perfect length for the crowd, with the circle pitting hitting a peak as the band busted out ‘It’s In My Blood.’ This was as fine a performance as one could ask of a veteran hardcore punk act: energetic and confident, yet utterly professional.

It was a short wait before the house lights went down. Though loud cheers and commotion lasted for about a minute, the noise quickly died down as the intro to ‘Locust Star’ began to play. It was immediately apparent that Scott Kelly and Steve Von Till would be in prime form on this night, as the two let out their signature screams with mighty and fearsome power. The band’s collective presence onstage was in a word, monolithic. Each member had their own tic that attracted the eye to their station: bassist Dave Edwardson’s spastic facial expressions, Kelly’s intense headbanging and keyboardist Noah Landis’ brutal beating of his instruments were some of the main attractions to look out for throughout the seventy-five minute set. One also can’t help but mention Edwardson tearing the strings off of his bass while looking completely insane near the end of ‘The Doorway.’ Though the band was once known for their special visuals live (I personally have never seen Neurosis in that context), the musicians were utterly mesmerizing to watch.

It was also quite astonishing to see the hundreds of people in the crowd keep their cellphones in their pockets and pay attention to the music. Seeing nearly a thousand people devote all of their energy to taking in great music without having to check Facebook or take low-quality video was simply awesome- kudos to the crowd for their admirable respect for the show, and kudos to the band for giving the crowd a reason to keep their eyes off of a screen. At one point, the audience could actually feel the show, as the volume became so intense that the floor of the Regency began to shake. It was an unreal and awe-inspiring experience, one that I have never felt at any rock concert before. 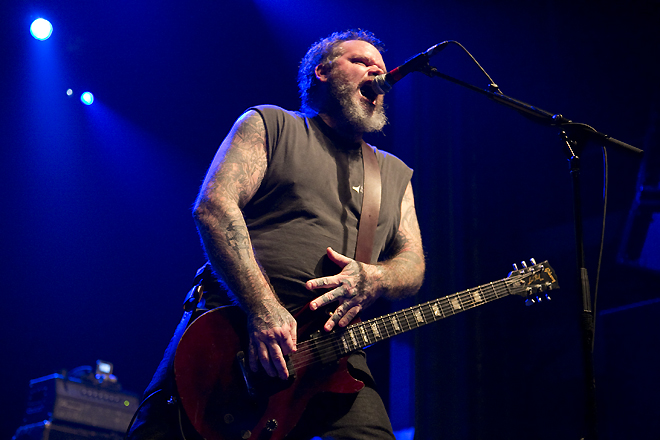 One aspect of Neurosis’ show that certainly deserves mention is the absolutely brilliant pacing of the set. Following the bludgeoning ‘Locust Star’ with the relatively cruising ‘We All Rage in Gold’ kept the momentum alive, while the band proceeded to slow down with a doomier pair of tunes from their 2001 opus, A Sun That Never Sets. Jason Roeder’s crashing cymbal work throughout the ‘The Doorway’ woke the audience right up if Landis’ great showcase at the end of ‘My Heart for Deliverance’ made them feel too much at ease. Though everyone in Neurosis was at the top of their game at this show, Landis in particular was a standout. He truly proved just how vital a keyboard player can really be to a heavy metal act- his parts, much higher the mix live than they’ve ever been on album, often added genuine spookiness and a sense of fear to the songs, with the highlight being the triggered samples that overlaid the end of ‘Stones from the Sky.’ Kelly and Von Till’s chords rammed the crowd like a freight train near the halfway point of the song, and the last few minutes made for one of the grandest climaxes to any live show that I have ever seen (it was also impossible to not dig the short bass solo that Edwardson snuck in).

When all was said and done, this show proved to be a fantastic way to cap off the year for Bay Area metal fans. Three tremendously performed opening sets led way to some of the best seventy-five minutes of live music I have seen this year. Doom, sludge, hardcore punk, post-metal… whatever the hell the bands performed, it rocked and made heads bang, bodies (and venues) move and induced a general state of higher musical experience. A very killer and very loud end to 2013, just as great as any metalhead could ask for.