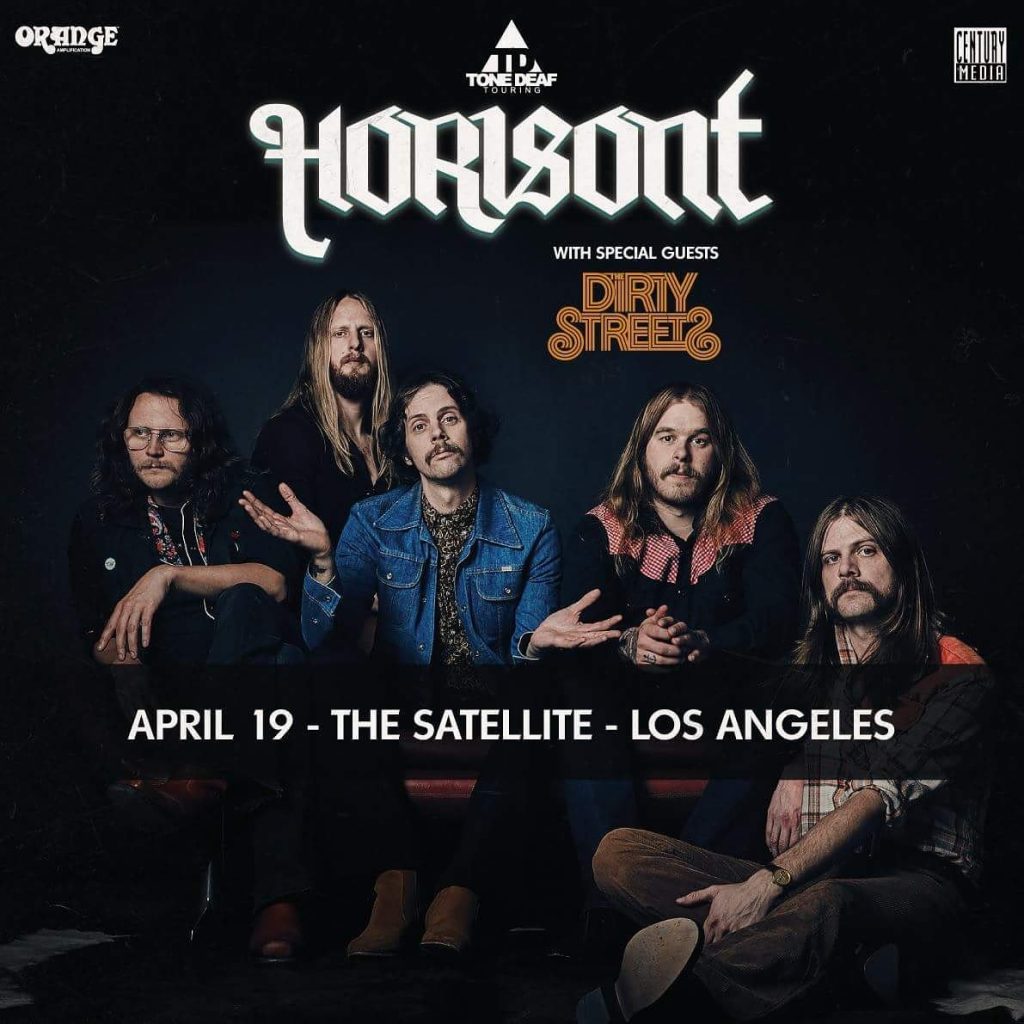 April 19th 2017, The Satellite, Los Angeles CA: Swedish classic hard rock perpetrators Horisont have been one of the most prolific and flawlessly excellent bands in the rock/metal realm in their decade-long existence thus far, already having as many as five full-length albums to their name, each one filled to the brim with glorious old-school heaviness. Their latest endeavor ‘About Time’ was released in February 2017 via Century Media Records, and anyone and everyone that let it grace their ears has since been eagerly awaiting Horisont tour news, while listening to the album on repeat non-stop as the sheer quality and class of the band’s musicianship on this effort captivated one and all. Longtime fans and brand new converts in North America were psyched beyond words upon the announcement of a headline tour in this part of the world through April-May 2017. But the Los Angeles show was announced a little later, much to the relief and excitement of Horisont’s LA fans. The band’s previous gig in this town was a strange yet memorable event, and last night’s event at the very aptly chosen Satellite turned out to be that plus so much more.

Doors opened at 8:30, and at around 9:10, Los Angeles stoner rock trio Lords Of Beacon House began proceedings with a righteous 35-minute set. These dudes were in the zone from the very moment they stepped on that stage and stayed in it throughout the set, seemingly letting their instincts and muscle memory take over, as the music possessed them and flowed smoothly, almost on its own. They were three but sure played as a unit, showcasing a degree of cohesion that was second to none. This band was added to the lineup for this show quite late in the game, but it was more than fitting to have them on the bill. Not knowing that they would be asked to play, one of their members had already purchased a ticket to this show in advance and all three of them were definitely planning on attending it anyway, and it was the perfect coincidence that three hardcore Horisont fans just so happen to be in a band that makes for an ideal opening act to Horisont. If by any minuscule realm of possibility you happened to smoke a joint before entering this show, the Lords Of Beacon House set would have certainly taken you to a higher place.

Next up were Dirty Streets, another three-piece but all the way from Memphis, Tennessee, on tour as Horisont’s support act for all the shows on this run. Dirty Streets toured with The Atomic Bitchwax in the summer of 2016 and left an indelible impression on anyone who saw them at the Viper Room in LA. So, some knew what to expect, while first-timers found the band easy on the ears. Dirty Streets undeniably injects a soulful element in their rock n’ roll, something that most likely stems from their Tennessee roots, but the most instantly notable aspect of their sound is the reminiscence to Zeppelin, which strangely enough isn’t nearly as common and prevalent in the present day as Sabbath worship. While hundreds of new bands sound like Sabbath, very few succeed at or even try sounding like Zeppelin. Dirty Streets does so, but in a manner that appeals to Sabbath worshippers, proving that both worlds can co-exist, plus they add their own unique touch to it as well. Many other bands would have killed for an opportunity to tour with Horisont, but it serves this tour well to have picked Dirty Streets to fulfill the task. By all means, a great support act.

At the scheduled start time of 11 PM, the five members of Horisont arrived on stage, as the Satellite was densely populated by this time and all was in readiness and anticipation for the Swedish time warriors to do what they do best. As hinted earlier, the last time they were in the Los Angeles area was on a co-headline run with Electric Citizen in November 2016. The LA show got moved from the Teragram to a D.I.Y. basement venue in East Hollywood, and with no stage and no lights, playing on the floor and through a very barebones sound system, Horisont rocked everyone’s socks off, and even though that venue got shut down and might get forgotten by most, no one in attendance would ever forget that night. The truest sign of a great live band is the power to attract repeat attendees every time they come through any given town. Sure enough, almost every single person from that D.I.Y. show was at the Satellite last night to see Horisont in a far more professional setting, and with the kind of show the band delivered here, it’s safe to say that everyone will attend the next LA show as well.

Starting strong with the epic title track off of the 2015 album ‘Odyssey’, Horisont wasted no time whatsoever in getting the heads banging and fists pumping in the crowd which was instantly drawn to move as close to the stage as possible. The masterful individual and collective musicianship of this quintet was on exhibit from the first note, but the genius of Horisont lies in making it all look so effortlessly easy, and their unmatchable ability to write ultra-catchy melodies, a quality that makes their live shows such immensely enjoyable experiences. Lead vocals, backing vocals, guitars, bass, drums, organ … there is a lot going on within the Horisont sound, but the manner in which it all comes together, although seemingly magical, is completely organic and there is nothing fake about it. The power of real, pure music compels you like no other, and Horisont is the living embodiment of it.

As expected, there were songs from the newest album ‘About Time’ in the set, but fans of the album were pleasantly surprised that besides the “singles”, the band delved into a deeper cut, the Swedish-sung ‘Letare’, as bassist Magnus Delborg took over from Axel Söderberg to deliver lead vocals on this one. Other new songs like ‘The Hive’ and ‘Electrical’ held their own amongst the better-known older tunes. The proggy title track ‘About Time’ was spellbinding in its live rendition, more than one could have possibly imagined, and one of the highlights of the entire performance.

Of course, the band also played old gems such as ‘Writing on the Wall’, ‘Crusaders of Death’ and ‘Nightrider’ and transported this gathering at the Satellite back to the ’70s. Then, as if their own music hadn’t already made this an incredible show, along came a cover tune, complete with a jam section, and it was UFO’s ‘Rock Bottom’ done Horisont style. As the risk of committing sacrilege, it has to be said with no doubt that Horisont’s rendition of the song completely blows out of the water the half-baked version the 2017 incarnation of UFO is playing these days. They kept extending the jam portion and the crowd got into it more and more, and just when you perhaps didn’t expect them to, they went back into the chorus one final time. With that, Horisont departed the stage.

Amidst unanimous demands for an encore, the band came back for one more song and ended the show with the ironically and perfectly chosen ‘Bad News’, leaving this blissed-out audience exhausted yet still wanting more.

There are good shows, there are great shows, and very rarely there comes a show that you know is special even while you are experiencing it. This was one of them. You won’t find Horisont listed on Metal Archives, but they sure are metal enough for Metal Assault, because Horisont plays the purest form of metal. Forget your genre and sub-genre preferences, go see Horisont because it’s among the finest live music performances you will have ever witness in your life.